Home blogging share your flair award And another one! 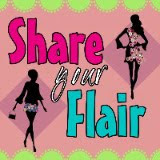 Thanks so much to Jerri of Gems by Jerri for giving me the Share Your Flair award!

I'm sort of overwhelmed. And flattered. Three blog awards in the space of a week?! Wow.

So, anyway. In keeping with the spirit of this award I need to share three things about myself with you:

1) I am a longtime fan of the original Star Trek (since around 1974). Watched it in reruns for many years. Have read countless Star Trek novels (some of which are excellent, most of which are, frankly, not all that memorable). And before you ask, yes, I watched ST:TNG, all 7 seasons of it, but I mostly quit following Star Trek on TV after that, so I don't know anything about the later series like Voyager or Enterprise. <shrug> I did see the new Star Trek movie this summer, and enjoyed parts of it, but I'm too much of a purist to embrace it wholeheartedly.

My love for time-travel stories, I'm sure, started first of all with Star Trek. Also my lifelong book-collecting habit. <g>

2) I grew up in New Jersey. Moved to North Carolina more than 25 years ago, originally with the intent of getting away from the snow and ice in the winter. And then, after I'd been living in Raleigh, NC, for some years, we had the Blizzard of 2000, which dropped 20 inches on central North Carolina in January 2000. Take a look at the pictures here to get an idea of what it was like. None of us who were here at the time will ever forget it! (I was snowed in for four days.)

3) I am a graduate of the University of North Carolina, and so was delighted when Carolina won the 2009 NCAA Men's Basketball Championship. Go Heels!

I would like to pass this award on to these three sites:

Passages to the Past

Congratulations to all of you!
blogging share your flair award

Thanks Karen, how thoughtful, thanks for thinking of me - I'm just on my out for vacation, but I'll try to do this when I get back! Thanks again!

Karen, congrats on the blog awards, I am not at all surprised because you do have a great blog. It must be a lot of hard work, but I really enjoy it. Thanks!

Passages to the Past said...

This is so cool, thanks Karen!

My favorite vacation was one spent in Asheville, NC and I've wanted to move there ever since! It is gorgeous and so grounding spiritually to be surrounded by nature. Ahhh.