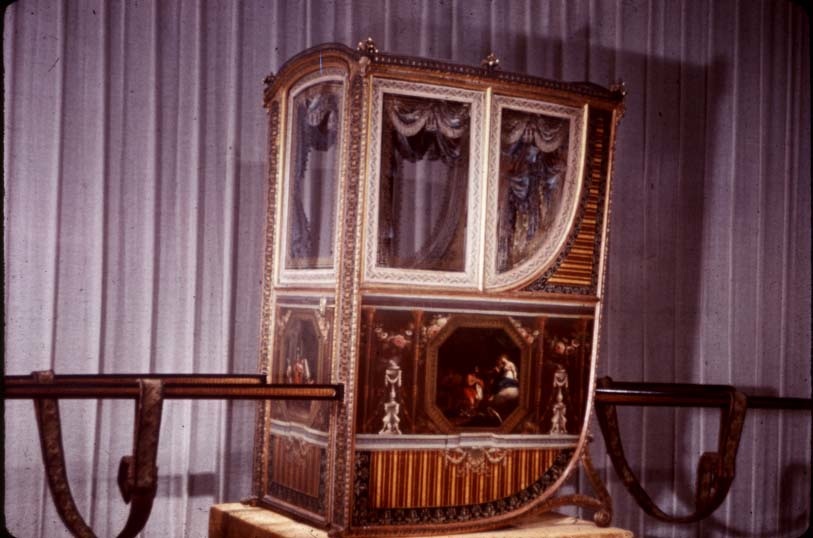 1) Sedan chairs were widely used as a means of transportation for wealthy people in the 18th century.  The photo above shows an example of a sedan chair from the collection of the Mint Museum in Charlotte, NC.  (Click on the photo for a bigger view.)  This particular sedan chair dates from the 1770s and was created by Robert Adam, the famous Scottish architect.


George Grenville had come in a sedan chair, and his bearers were waiting on the embankment. Grenville generously put these at Hal’s service, and he was taken off at the trot for Argus House, nearly insensible. Grey took leave of his friends as soon as he decently could and made his own way home on foot.


Sedan chairs for hire were common in London. Chairmen wore a uniform, were licensed to carry passengers, and had to display a number, like today’s taxi drivers. Three hundred chair permits were issued in London and Westminster in the early 1700′s. A similar system was later used in Scotland, where a fare system was established in 1738. A trip within a city cost six pence and a day’s rental was four shillings.

You may recall Rab MacNab, who worked as a chairman in London in LORD JOHN AND THE BROTHERHOOD OF THE BLADE. 2) The photo above shows what a thrush looks like.


"Thrush, is it, they call ye?” Mrs. Bug paused in her tonsorial activity, holding up a strand of glossy black and squinting suspiciously at it, as though in search of vermin.

“Oh, aye, but it’s no for the color of his bonnie black locks,” Duncan put in, grinning at Roger’s obvious discomfiture. “It’s for the singin’. Honey-throated as a wee nightingale, is Roger Mac."

Here's a video of what a wood thrush sounds like.  These birds are common to North America, but there are other varieties of thrushes found across the UK and Europe.  They certainly make a very pleasant sound!  It's a fitting nickname for Roger.

3) This painting by Belgian artist Patrice Courcelle shows what a French grenadier would have looked like circa 1750. (Click on the picture for a bigger view.)  You may recall Lord John's encounter with a French grenadier at the Battle of Crefeld, which took place on June 23, 1758.


"Surrender,” the grenadier said in French. “You are my prisoner.”

Grey hadn’t breath to spare in reply. He’d dropped his saber in the fall, but it lay on the ground, a few feet away. Gasping and swallowing, he gestured briefly to the grenadier for patience, walked over, and picked up the sword. Then he gulped air, swung it two-handed round his head, and, lunging forward, struck at the grenadier’s neck with the fixed intent of removing his head. He halfway succeeded, and the shock of it nearly dislocated every bone in his arms.

The grenadier fell backward, the spurting blood from his neck failing to obscure the look of total astonishment on his face. Grey staggered, barely kept a grip on his sword, but knew that to lose it was to die on the spot.


By the 18th century, the throwing of grenades was no longer relevant, but grenadiers were still chosen for being the most physically powerful soldiers and would lead assaults in the field of battle.

As you can see from the painting, grenadiers wore distinctive headgear that set them apart from other soldiers. This tradition of elaborate head coverings can still be seen today -- for example, in the bearskin hats worn by the British soldiers in the Queen's Guard at Buckingham Palace (above). 4) This photo shows a baby with a Mongolian spot.  Here's Jamie and Claire, peering closely at Fanny Beardsley's newborn baby.

I leaned close to look. He held the baby’s feet up in one hand, a wad of soiled cotton lint in the other. Just above the tiny buttocks was a dark bluish discoloration, rather like a bruise.

It wasn’t a bruise. It was, though, an explanation of sorts.

“She isn’t hurt,” I assured him, pulling another of Mrs. Beardsley’s discarded shawls up to shelter her daughter’s bald head. “It’s a Mongol spot.”

“It means the child is black,” I explained. “African, I mean, or partly so.”


Caused by simple variations in pigment, Mongolian spots are much more prevalent in babies of color, appearing in more than 90 percent of Native Americans and children of African descent, more than 80 percent of Asians, and more than 70 percent of Hispanics.

I had never heard of Mongolian spots before I read THE FIERY CROSS, and I had no idea they were so common.

5) Remember the scene in OUTLANDER where Jamie catches a trout with his bare hands?


We stretched full-length on the cool rock, head to head, peering down into the water, willow branches brushing our backs.

“All it is,” he said, “is to pick a good spot, and then wait.” He dipped one hand below the surface, smoothly, no splashing, and let it lie on the sandy bottom, just outside the line of shadow made by the rocky overhang. The long fingers curled delicately toward the palm, distorted by the water so that they seemed to wave gently to and fro in unison, like the leaves of a water plant, though I saw from the still muscling of his forearm that he was not moving his hand at all.

The technique -- known as "guddling" in Scotland -- has been used for many centuries, but it's currently illegal in Britain.  It's mentioned in Shakespeare's Twelfth Night, when the servant Maria refers to the approach of the hated Malvolio, head of Olivia's household, with the words "for here comes the trout that must be caught with tickling" (Act II, Scene 5).

Here's an article about trout tickling in the UK.  Be sure to read the comments!

Thank you for this week's facts, Karen! I am currently doing a re-read of the LJ books, so a couple of these were particularly timely!
Theresa

You are right as usual Karen, the comments about trout tickling were great! Thanks for another informative week.

When my twins were born, they had Mongolian spots - which persisted until they were about two years old, then disappeared. I had never heard of them either until the doctor told me that's what they were. They made sure to record them in their health records to make sure that in the future, I wouldn't be accused of child abuse. My twins were very low on the height/weight chart, and when I brought them in for their 12 month appointment, there was a new nurse who saw how thin they were (they ate plenty, just had a thin body type) and the Mongolian spots and was ready to report me to Child Protective services for beating and neglect. Fortunately, another nurse, who had seen them monthly since their birth, disabused her of that notion. Phew! (Side note - they finally caught up to age group and are now normal sized.)

Michele @ The Hills are Alive said...