"A jewel?” Lord John’s voice sounded blank, even to his own ears. “What sort of jewel?”

“Any sort.” Fraser shrugged, impatient. “It doesna matter--so long as it should be some precious gem. I once gave ye such a stone--” His mouth twitched at that; he had handed over the stone, a sapphire, under duress, as a prisoner of the Crown. “Though I dinna suppose ye’d have that by ye, still.”

In point of fact, he did. That particular sapphire had traveled with him for the last twenty-five years, and was at this moment in the pocket of his waistcoat.

He glanced at his left hand, which bore a broad gold band, set with a brilliant, faceted sapphire. Hector’s ring. Given to him by his first lover at the age of sixteen.....Without hesitation, but with some difficulty--the ring had been worn a long time, and had sunk a little way into the flesh of his finger--he twisted it off and dropped it into Jamie’s hand.

And Hector's ring, symbolizing (to John) the tragic loss of his friend, in the end will help save the life of Bree or Roger or one of the kids.  John will never know this, of course, but it makes me, as a reader, feel some sort of closure regarding Hector's death.  That something good came out of it after all, I mean, even if it took thirty years.

For more about sapphires, look here.

2) The first modern cuckoo clocks were made in the Black Forest region of Germany in the 1740s, according to Wikipedia.  The example above, from the collection of the Deutsches Uhrenmuseum (the German Clock Museum), is from 1780.  Cuckoo clocks would have been state-of-the-art in 1744, when Claire saw the one in Louise's country house.


"This is my newest toy; is it not lovely?” she cooed, running her hand lovingly over the carved dark wood of a tiny house that sprouted incongruously from the wall next to a gilt-bronze sconce in the shape of Eurydice.

“That looks like a cuckoo clock,” I said disbelievingly.

“You have seen one before? I didn’t think there were any to be found anywhere in Paris!” Louise pouted slightly at the thought that her toy might not be unique, but brightened as she twisted the hands of the clock to the next hour. She stood back, beaming proudly as the tiny clockwork bird stuck its head out and emitted several shrill Cuckoo!s in succession.

“Isn’t it precious?” She touched the bird’s head briefly as it disappeared back into its hidey-hole.

Here is another example of an 18th-century cuckoo clock, showing the mechanism.  Click on the photo for a bigger view.  How does it work exactly?  According to this site,


Two small pipes are attached to the tops of two air-driven bellows that make alternating high and low pitched whistles that mimic the sound of the cuckoo bird. At the top of each hour as the cuckoo clock's iron weights and swinging pendulum cause the clock's wheels to turn, the cuckoo bird is released from his nest and the bellows are activated sending alternating puffs of air into each pipe causing the sound of a cuckoo.

3) Until I read THE FIERY CROSS, I'd never heard of people writing letters both horizontally and vertically to save paper, but apparently this was a common practice in the 18th century.


Mama writes in tiny letters when she does her case-notes, and when Da writes to Scotland he writes on both sides of the page, and then he turns it sideways and writes across the lines, so it looks like lattice-work.

The photo above shows an example of a "crossed letter" from Robert Ker Porter to Anna Maria Porter, dated 4 April 1806.  Click on the photo to enlarge it, and you'll see the writing going from bottom to top across the page.  You can clearly see the "sideways" signature near the right-hand side of the photo.

According to this site, where I found the photo:


Crossed letters began to decline in use after 1840, when the “Uniform Penny Post” was established in England, allowing letter-writers to send domestic mail a rate of a penny per 1/2 once (thus the name “penny post”), regardless of distance, payable in advance by the sender.

4) Claire was a bit squeamish about the use of leeches (Hirudo medicinalis) when she first arrived in the 18th century. Remember Mrs. Fitz showing her how to use them?


"Still bleedin’ under the skin. Leeches will help, then.” She lifted the cover from the bowl, revealing several small dark sluglike objects, an inch or two long, covered with a disagreeable-looking liquid. Scooping out two of them, she pressed one to the flesh just under the brow bone and the other just below the eye.

“See,” she explained to me, “once a bruise is set, like, leeches do ye no good. But where ye ha’ a swellin’ like this, as is still comin’ up, that means the blood is flowin’ under the skin, and leeches can pull it out.”

I watched, fascinated and disgusted. “Doesn’t that hurt?” I asked Jamie. He shook his head, making the leeches bounce obscenely.

Here's a very interesting NOVA video about the medicinal use of leeches. (Warning: Not for the squeamish!)

Leeches were officially approved by the FDA in 2004. I discovered while researching them that there is a leech therapy center in Scottsdale, AZ, where Diana Gabaldon lives. <g> 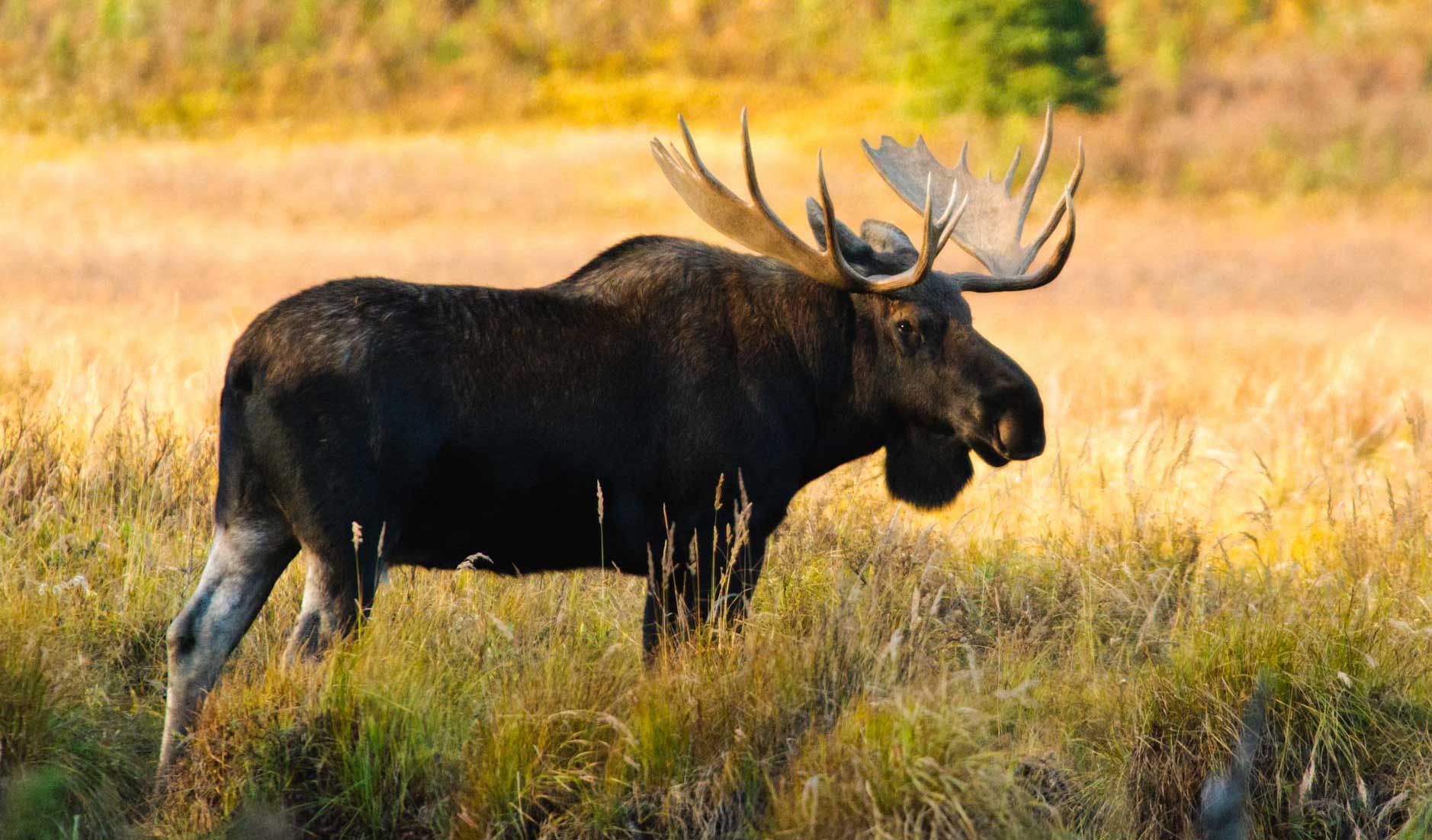 The photo above shows a moose (Alces americanus), the largest species in the deer family.  Click on the photo for a bigger view.


It was more than a week later that Roger went out with a hunting party. The weather was cold but clear, and they traveled far, eventually finding and killing a moose. Roger was stunned, not only by the size of the thing but by its stupidity. He could understand the attitude of the hunters: There was no honor in killing such a thing; it was only meat.

It was a lot of meat. He was burdened like a pack mule, and the extra weight bore hard on his lame foot; by the time they returned to the village, he was limping so badly that he couldn’t keep up with the hunting party, but lagged far behind, desperately trying to keep them in view lest he be lost in the forest.

According to Wikipedia, an adult bull moose can weigh from 840–1,500 lbs (380–700 kg). If you want to get a sense of the sheer size of these animals, take a look at this video, filmed in northern Ontario in 2007. (It's labeled as "Moose Hunting", but in fact the moose on the video was not harmed at all.)

Loved the Moose. The sheer size of them is awe-inspiring. Once,when I was a kid, a spooked elk (the Norwegian version of moose) came thundering down our little lane and down into the river. We were in the kitchen when it went by and it just about filled the window. The poor thin ended up getting caught in the floating lumber tied along the river and it had to be shot. I'll never forget the sight of it , bigger than life.

Curiously moose are known as elk in Europe. They use the same name which we use for American elk (which aren't found in Europe.)

Karen, I had forgotten that Lord John still carried Jamie's sapphire in his pocket from Ardsmuir days, and he chose instead to give up Hector's ring. Wow. How did I miss that?

And leeches! Once introduced, they seem to find their way into the Outlander story again and again. I'd love to see a list of all the times/ways leeches are used in the books. Thanks for another great Friday! -- Martha J.

So interesting as usual. One big reason I look forward to Fridays! Thank you Karen for all the work you do to enlighten us

Kris - I've never seen a moose in real life, only in pictures and on TV. That must have been quite a shock, seeing one up close like that!

Martha - I think it's fascinating that Claire's attitude toward leeches changed over time, as she saw what they were capable of doing.

JKC - thanks so much! Glad you enjoyed this week's collection! :-)

I have read about writing in both directions to save paper before. It seems like it may have been in the 'Little House' books; although the comment above said it fell out favor before their time. Another bit of the wonderful thriftiness of those who came before us that I appreciate. I had never seen an example though, so this was fun. Thanks Karen.