Happy Father's Day to all the dads out there!  In honor of the day, I thought I'd post a selection of my favorite quotes about fathers and fatherhood from Diana Gabaldon's books.  Hope you enjoy them!

"I hadna realized until I saw him just how alone I’d felt there--or how scairt. The soldiers would not give us any time alone together, but at least they let me greet him.” He swallowed and went on.

“I told him I was sorry--about Jenny, I meant, and the whole sorry mess. He told me to hush, though, and hugged me tight to him. He asked me was I hurt badly--he knew about the flogging--and I said I’d be all right. The soldiers said I must go then, so he squeezed my arms tight, and told me to remember to pray. He said he would stand by me, no matter what happened, and I must just keep my head up and try not to worrit myself. He kissed my cheek and the soldiers took me away. That was the last time I ever saw him."

“I wondered a bit,” he said thoughtfully, “whether my father was the sort of father he was because of the way old Simon treated him. I didna realize it at the time, of course, but it’s no so common for a man to show his feelings for his sons.”

“You’ve thought about it a lot.” I offered him another flask of ale, and he took it with a smile that lingered on me, more warming than the feeble autumn sun.

“Aye, I did. I was wondering, ye see, what sort of father I’d be to my own bairns, and looking back a bit to see, my own father being the best example I had. Yet I knew, from the bits that he said, or that Murtagh told me, that his own father was nothing like him, so I thought as how he must have made up his mind to do it all differently, once he had the chance."

Willie knew how an earl should behave; he was making a masterful effort to subdue his tears, sniffing ferociously and swiping at his face with a sleeve.

“Allow me, my lord.” Jamie did kneel then, and wiped the little boy’s face gently with his own coarse handkerchief. Willie’s eyes looked at him over the cotton folds, red-rimmed and woeful.

“Have you really got to go, Mac?” he asked, in a very small voice.

“Aye, I have.” He looked into the dark blue eyes, so heartbreakingly like his own, and suddenly didn’t give a damn what was right or who saw. He pulled the boy roughly to him, hugging him tight against his heart, holding the boy’s face close to his shoulder, that Willie might not see the quick tears that fell into his thick, soft hair.

“You can...call me Da,” he said. His voice was husky; he stopped and cleared his throat. “If--if ye want to, I mean,” he added diffidently.

“Da,” she said, and felt the smile bloom easily this time, unmarred by tears.

He smiled back, the corners of his mouth trembling slightly. “No. It’s only...simple.”

And suddenly it was all simple. He held out his arms to her. She stepped into them and found that she had been wrong; he was as big as she’d imagined--and his arms were as strong about her as she had ever dared to hope.

Roger had sworn an oath to take Jemmy as his own, no matter what the little boy’s true paternity might be; he was an honorable man, Roger, and he meant it. But the speech of the heart is louder than the words of any oath spoken by lips alone.

When I had gone back, pregnant, through the stones, Frank had sworn to me that he would keep me as his wife, would treat the coming child as his own--would love me as he had before. All three of those vows his lips and mind had done his best to keep, but his heart, in the end, had sworn only one. From the moment that he took Brianna in his arms, she was his daughter.

Jem was heavy in his arms, and groggy. He stirred, lifted his head, and blinked, blue eyes glassy with sleep.

Jem sighed like a punctured tire and dropped his head on Roger’s shoulder with the force of a spent cannonball. He seemed to inflate again for a moment, but then put his thumb in his mouth and subsided into that peculiarly boneless state common to sleeping children. His flesh seemed to melt comfortably into Roger’s own, his trust so complete that it was not necessary even to maintain the boundaries of his body--Daddy would do that.


"For a long time,” he said at last, “when I was small, I pretended to myself that I was the bastard of some great man. All orphans do this, I think,” he added dispassionately. “It makes life easier to bear, to pretend that it will not always be as it is, that someone will come and restore you to your rightful place in the world.”

“Then I grew older, and knew this was not true. No one would come to rescue me. But then--” He turned his head and gave Jamie a smile of surpassing sweetness.

“Then I grew older still, and discovered that, after all, it was true. I am the son of a great man.”

“I wish for nothing more." 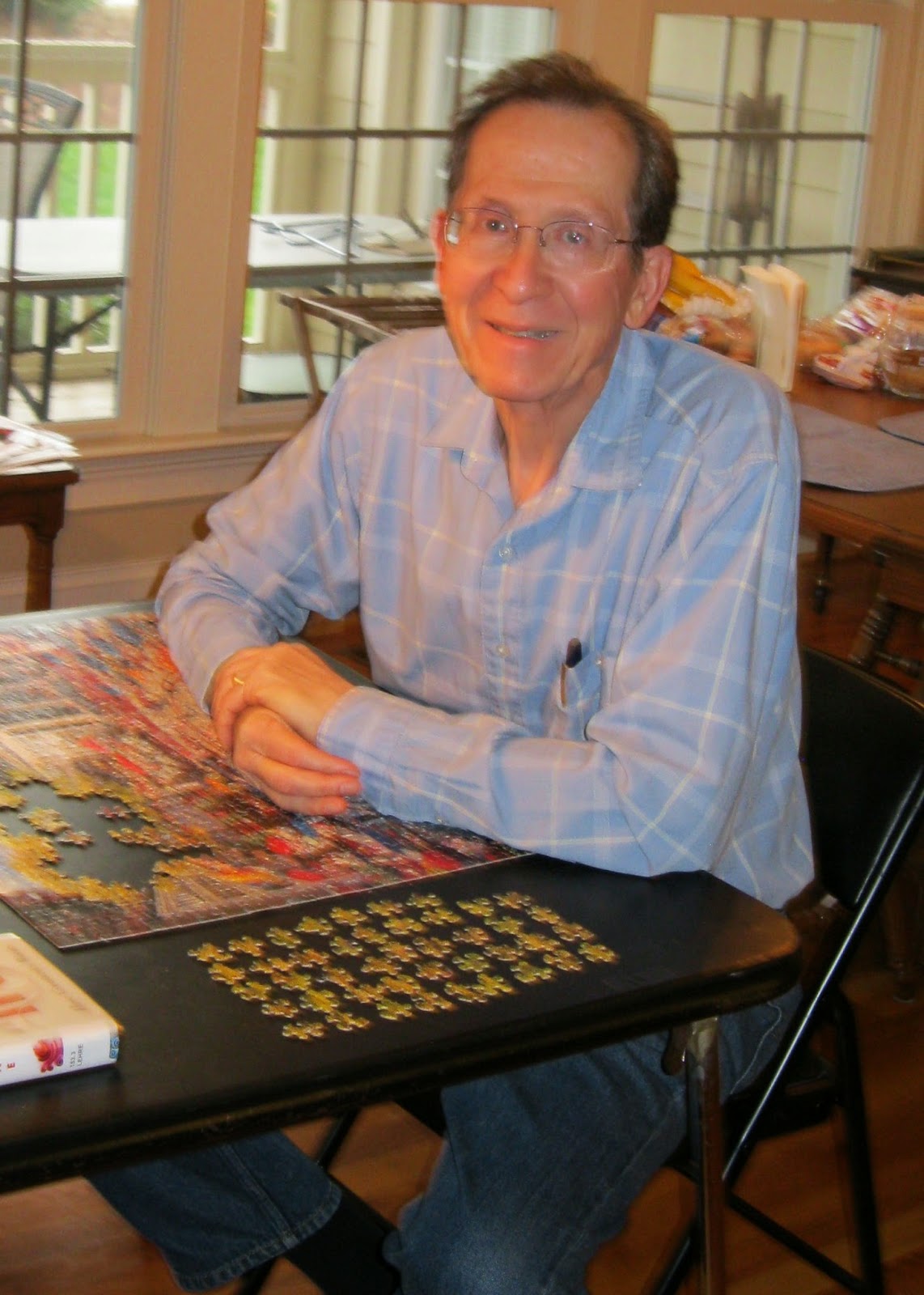 Finally, on a personal note:  My dad, Chuck Henry (pictured above in December, 2012), was diagnosed last week with a form of blood cancer called multiple myeloma.  (It's treatable with chemotherapy, but unfortunately not curable.) He's 77 years old and until very recently had been in excellent health all his adult life.  This has been quite a shock for our whole family, to put it mildly, but we're determined to give him the best possible quality of life, for as long as we can.  As the only one of my siblings who lives close by, I am doing my best to support both him and my mom as we try to get through this. All prayers and healing thoughts appreciated!

❤️ A "Multiple Tissue Alert". Should have come with this!
Thank you for all the time and effort you put in on behalf of all of us Outlander addicts. This one is especially poiniant for me this year.

Sending prayers and good wishes for your Dad and a reminder to take care of you and yours First! (The rest of us mutters will be ok if you need space!)🌹

Thank you Karen for your thoughtfulness to share these wonderful Father quotes. Also, thanks for sharing this piece of your life with us too. Your father and whole family are in my prayers.

God Bless your family and Prayers for your Dad

May your days with your father be blessed, and may his treatment be successful.

Aww... Some of my favourite passages in the whole series. Thank you!

Big hugs to you and your Dad! Thanks for all you do for DG's fans.

Thank you for the wonderful tear jerking post. And prayers for your dad. <3

I will bookmark your site and take the feeds additionally?
I am glad to seek out a lot of useful information here in the post, we'd like develop more
techniques on this regard, thanks for sharing. .
. . . .

My thoughts are with you and your family. You've done so much for all of us fans, I hope we can give back to you some small bit of strength and comfort to get through the difficult days ahead. Wishing for the best outcome for your father and your family.

This was a great post, Karen. Hope your dad is doing better. Thanks for making this a great and informative blog.

Thank you for your wonderful post. Sending reiki and prayers to your father.God bless!

Karen,Prayers and Love to you and your family.