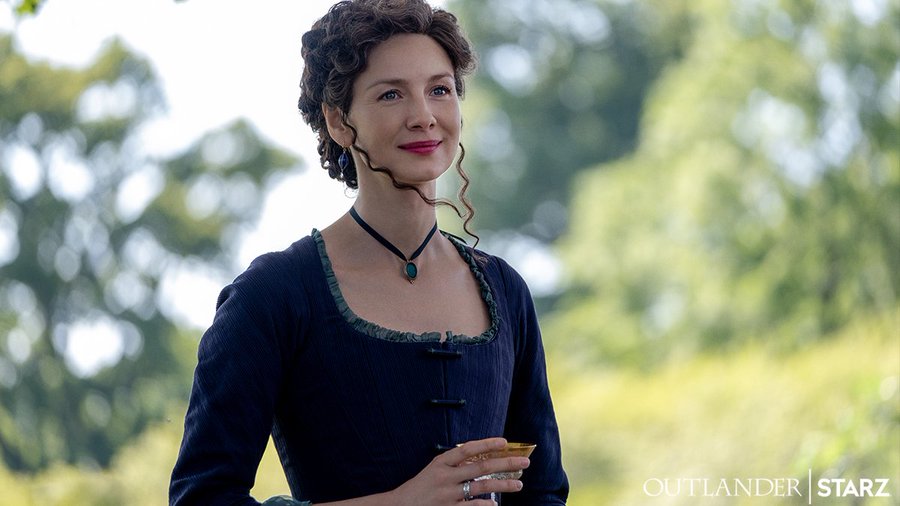 Wishing a very happy 103rd birthday (believe it or not!) to our favorite time-traveling Sassenach, Claire Elizabeth Beauchamp Randall Fraser!  She was born on October 20, 1918.

If you're on Twitter, please join fans worldwide in celebrating Claire's birthday with the hashtag #HappyBdaySassenach.

It took me completely by surprise and I just stared stupidly at him for a moment. “What?” I managed at last.

“I said ‘Happy Birthday.’ It’s the twentieth of October today."

In celebration of Claire's birthday, I'm reposting my "ABC's of Claire Fraser", which I first posted here in 2011. I got the idea from a writing exercise posted a few years ago on the Compuserve Books and Writers Community (now TheLitForum.com), which is the online forum where Diana Gabaldon hangs out. The idea is to list one word pertaining to the character for each letter of the alphabet, along with a brief explanation.

All quotes from the OUTLANDER books are copyright (c) Diana Gabaldon, of course.

If you have not read all of the OUTLANDER books, you will find SPOILERS below. Read at your own risk!

A - Adaptability.  This is one of Claire's greatest strengths, in my opinion.  Many of us would have a great deal of difficulty adjusting to life in the 18th century.  Claire adapts relatively quickly, and we rarely see her thinking about missing the conveniences of the 20th century.

B - Bravery. "Ye were always bolder than was safe; now ye're fierce as a wee badger." (A BREATH OF SNOW AND ASHES, Chapter 20, "Dangerous Gifts")  Whether it's killing a wolf with her bare hands in OUTLANDER, or surviving the ordeal of being abducted and raped in ABOSAA, Claire never, ever gives up, and I find much to admire in that.

C - Cat.  Adso, to be precise. <g>  Claire loves that wee cheetie, and the scene in ECHO where Claire says goodbye to Adso was just heartbreaking.

D - Diagnosis.  Joe Abernathy called her the "best diagnostician I ever saw".

E - Eyes.  One of Claire's most striking features.  "They're the color of verra fine whisky, wi' the sun shining through them from behind.  I thought this morning they looked like sherry, but I was wrong.  Not sherry. Not brandy.  It's whisky.  That's what it is." (DRAGONFLY IN AMBER, Chapter 6, "Making Waves")

F - Face.  Claire's "glass face" -- her inability to hide what she's thinking or feeling from other people -- often gets her into trouble.

G - Garden. "Daddy always used to say it, when he'd come home and find Mama puttering in her garden--he said she'd live out there if she could.  He used to joke that she--that she'd leave us someday, and go find a place where she could live by herself, with nothing but her plants." (DRUMS OF AUTUMN, Chapter 43, "Whisky in the Jar")

H - Hair.  Claire's wild, unruly hair could almost be considered a character in its own right.  It reflects her personality extremely well, and it's one of the things Jamie likes best about her.

I - Intelligence.  Claire has a quick mind, and doesn't suffer fools gladly.  (She's much like Diana Gabaldon in that respect, actually.)

K - Knitting.  One of the very few things that Claire does not do well with her hands.

L - Lallybroch.  Claire felt she'd found a home there, for the first time in her life.

M - Mother.  Not just to Bree, but also to Faith, her stillborn first child.  "You are my baby, and always will be.  You won't know what that means until you have a child of your own, but I tell you now, anyway--you'll always be as much a part of me as when you shared my body and I felt you move inside.  Always."  (VOYAGER, Chapter 42, "The Man in the Moon")

O - Outlander, or, as the Scots say, Sassenach.  "He liked the strangeness of her, the Englishness.  She was his Claire, his Sassenach." (FIERY CROSS, Chapter 18, "No Place Like Home")

P - Practicality.  Claire is perfectly willing to cast aside society's conventions of what is considered proper attire for a woman, in favor of something more practical.  "I am improvising a brassiere," I said with dignity.  "I don't mean to ride sidesaddle through the mountains wearing a dress, and if I'm not wearing stays, I don't mean my breasts to be joggling all the way, either.  Most uncomfortable, joggling."  (DRUMS OF AUTUMN, Chapter 13, "An Examination of Conscience")

Q - Quentin Lambert Beauchamp. Claire's beloved Uncle Lamb, who raised her from the age of five.

R - Ruthlessness.  I think this is one of the qualities that makes Claire a good surgeon:  "[The] detachment of mind in which I could balance on that knife-edge between ruthlessness and compassion, at once engaged in utmost intimacy with the body under my hands and capable of destroying what I touched in the name of healing." (AN ECHO IN THE BONE, Chapter 62, "One Just Man")

S - Stubbornness.  Claire is at least a match for Jamie in this respect, and gives as good as she gets.

T - Time-travel.  The catalyst for this whole amazing adventure. <g>

U - Unladylike language.  Claire's use of expressions like "Jesus H. Roosevelt Christ" and "bloody f*cking hell" frequently scandalizes the 18th-century people around her, but to me, this is an integral part of her character.

V - Vitamins.  "Well-nourished, is what I am," I retorted.  "Half the people on your estate are suffering from mild scurvy, and from what I've seen on the road, it's even worse elsewhere.  It's vitamin C that prevents scurvy, and apples are full of it."  (DRAGONFLY IN AMBER, Chapter 36, "Prestonpans")

W - White.  Claire's Indian name is White Raven, and she's been called many similar things over the years, including the White Witch and La Dame Blanche ("White Lady").  I'm intrigued by Nayawenne's prediction that Claire will come into her full power when her hair turns white, but I guess we'll just have to wait and see about that. <g>

X - eXperiments.  From home-grown penicillin to gallberry ointment for the treatment of malaria, Claire is always experimenting with new ways to help her patients.

Y - Youthful.  Claire looks much younger than other women her age in the 18th century, owing to the influence of genes, hygiene, and good nutrition.

Z - Zero.  The number of times Book Claire has traveled though the stones using gemstones for protection.

As you can see just from these brief examples, Claire Elizabeth Beauchamp Randall Fraser is a remarkably complex, multifaceted character.  Many thanks to Diana Gabaldon for creating such an unforgettable character, and also to Caitriona Balfe, who is doing an AMAZING job bringing Claire to life on TV!

Here are the other posts in my ABC's series. Hope you enjoy them!