My other Scottish addiction 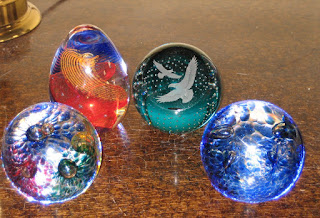 About two years ago, I started collecting Caithness paperweights. I just love the look of them, and it wasn't until after I bought the first one that I realized they were made in Scotland.

The picture above shows my current collection. The one on the far left was the first one I bought. The green one, "Eagles in Flight", was the second. I got the red-and-purple one last fall. And the latest addition, the blue one on the right, is one I just bought yesterday, on an impromptu visit to the local store (Replacements, near Greensboro, NC) that sells them.

Aren't they beautiful? I find them very soothing and peaceful to look at.

They are lovely, Karen. :D

I have no idea why Firefox won't let you post comments. I'm using it right now (though on a PC, not a Mac).

I love the blue one on the right. It looks like oceans in another world.

I love them all. Very nice collection.

Karen, if you get to Scotland, be sure to visit the Caithness factory for their glassblowing demonstration and factory shop. The one we went to in 1996 was in Oban on the west coast, but it does not seem to be open any more, as it is not shown online, only the main one in Crieff in Perthshire. Their paperweights are really lovely to collect. In the past they also made millefiori jewelry just like tiny paperweights. They are my favorites but very difficult to find these days.

Cally - Thanks for the information! I've never been to Scotland, still hoping to visit some day.