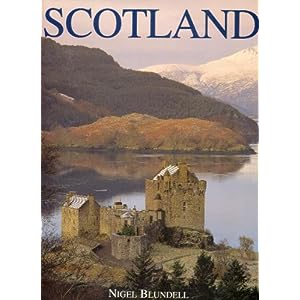 I happened to see Nigel Blundell's SCOTLAND in the Bargain Books section of Barnes & Noble last week. Naturally I couldn't pass it up. <g>

It's priced VERY cheap for its size -- this is a coffee-table book, but it cost me only about $13.00. I suspect it's about to go out of print, because it was originally published in 1998 and there are hardly any reviews of it in places like Amazon.com.

The book includes many, many gorgeous photographs of Scotland's scenery, castles, lochs, mountains, etc. No mention anywhere in it of Diana Gabaldon's books, though. <g>

The first section gives an overview of Scottish geography (useful for someone like me who has never visited the country). Interesting bit of trivia: the man who invented "Munro bagging" (mentioned by Roger in DRUMS, chapter 3, "The Minister's Cat") was named Sir Hugh Munro. I'd like to think that Diana named her character, Jamie's friend Hugh Munro, after the historical figure. <g>

The second section, by far the largest part of the book, is devoted to Scotland's history, going back at least 1000 years, lavishly illustrated with paintings, etc., depicting the various historical events, and many photographs of the places involved. I learned a lot from reading this section of the book, though it was a bit too long.

I really enjoyed seeing the pictures of the standing stones of Callanish in Chapter 4. Would love to see them some day!

I was particularly struck by the story of the Glencoe Massacre of 1692, the details of which I had not heard before. It was much more horrific than I had realized!

There is a picture in the book of the Leanach farmhouse near Culloden, mentioned in VOYAGER as the place where Jamie and the others hid after the battle. According to the book, "They [Cumberland's troops] found more than 30 officers and men in a barn on Old Leanach farm, barricaded it and set it alight." (Sounds very much like what the English soldiers threatened to do to Claire and Jamie and Dougal and the others, after Falkirk, doesn't it?)

The last two sections of the book are devoted to arts and culture -- Scottish literature, Highland Games, whisky-making, and so on. (There's a detailed description of the various types of single-malt whisky.)

My biggest complaint is that the book has more than its share of typos and editing errors. But the pictures are wonderful, and as I said, you can't beat the price, so if you're interested, you can order the book on the Barnes & Noble site, here. It's listed as a "Clearance Sale" item at the moment, but I don't know how long that will last.

If you have any other recommendations for good general books about Scotland (with pictures!), please post them here.
book review diana gabaldon nigel blundell outlander scotland

I bought this fabulous book the same way...from the discount rack at Barnes and Noble and it was just what I was looking for! Beautiful photos, history, customs, etc.