THE EXILE preview in ECHO paperback 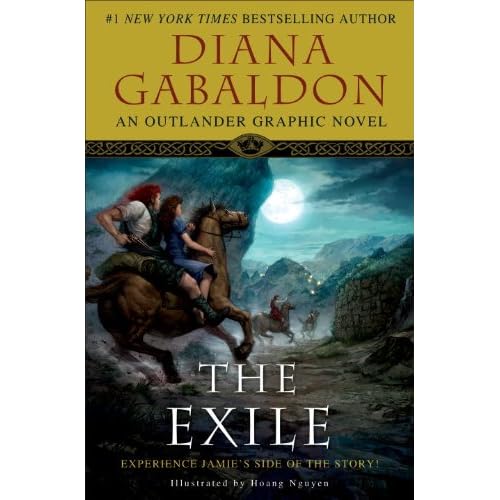 I picked up my copy of the new ECHO trade-paperback (for those of you who don't know, that's the larger size paperback) at Borders yesterday. Yes, the cover is VERY, um, green. <g> (Diana refers to it jokingly as the Green Slime, and the nickname is sort of catching on.) No question, if the intent was to make the book easy to spot on a table, it worked. The color actually looked much better when I got it home (more subdued, once it was out of the bright lighting in the bookstore).

As promised, the ECHO paperback contains an eight-page preview of the upcoming OUTLANDER graphic novel, THE EXILE. (Well, actually, it's the cover picture plus seven pages of the actual story, but who's counting? <g>)

EXILE SPOILERS below.....don't look if you don't want to know yet!

That was a lot of fun! <g> I'm not going to nitpick, just note a few things that jumped out at me as I looked at these pages:

First, a general comment. The lettering (of the dialogue, etc.) is quite beautiful, and I liked the "ribbon" effect used for the occasional bits of narration. For someone like me, who's not familiar with graphic novels, that was a pleasant surprise. I guess I was expecting comic-book-style lettering, in all caps, that sort of thing. This is much better than what I had been picturing.

Cover picture - Claire is most definitely wearing shoes on the cover now. <g> (For those of you who don't know, this was something that sharp-eyed readers on Compuserve -- no, not me, but several other people -- pointed out to Diana several months ago, and it has, fortunately, been corrected.)

Page 1: I love that shot of Jamie in the third frame. The face is just right. Still very much a youthful face -- he's 22, after all -- but IMHO he looks older than his years in this picture, more mature, somehow, which feels right. (For anyone who thinks his hair is not red enough in that frame -- in my opinion, that's an effect of the way the light falls in that scene, nothing more. You can trust me on this <g>, because my hair is a very similar color to the way Jamie's is described in the books, and it does indeed vary in color a great deal depending on the lighting conditions.)

Page 2: "Bang" made me giggle, from the comic-book feel of it....but again, I'm not used to graphic novels. (It wasn't immediately clear to me if the soldier firing the shot in the second panel was supposed to be BJR or not, but from Diana's comments on Compuserve, evidently that is indeed BJR. Just in case you're wondering.)

I love the panel at the bottom where Jamie falls off the horse, because of that view of the backs of his legs. <g> I know he's in horrible pain and all that, but I couldn't help smiling anyway. (And his hair is just the right color in that shot, in my opinion, as well as on the following pages.)

Page 3: BJR is unmistakable, at the bottom of the page. My instant reaction was, "He looks mean!" And then a moment later I realized who he was. I love the detail on the dragoons' helmets. All of them are just slightly different, which surprises me a bit. Very realistic-looking, though.

Page 4: I like the way the Gaelic expression is footnoted at the bottom of the panel. You don't really have to take your attention away from the action in the scene in order to read it. (I had thought the footnotes might appear at the very bottom of the page; this is better, I think.) And I also like the way this scene explains why and how they came to be at the cottage in the first place. I liked that view of the inside of the cottage very much (the next to last panel).

Page 5: Seeing Craigh na Dun from a distance like that really reinforces the idea (visually, I mean) that the circle is located high up atop a hill. I'm very curious about Murtagh's reference to an "evil dream" in the third frame. (Wait and see, I guess....) Just a wild speculation here....but Jamie has been known to have premonitions, dreams about the future, etc. Is it possible that he dreamed about Claire before he met her?

I think Murtagh looks suitably scruffy-looking in these pictures, which is good. And Diana had this to say, when I asked whether he actually saw Claire come through the stones:

Murtagh _does_ see her come through. <g>

How's that for a bombshell?!? Murtagh saw Claire come through the stones. No wonder he's suspicious of her from the very beginning! I will save my speculations on this point for later, when I've had time to think through all the implications -- but it's very intriguing!

Page 6: I loved Claire's line "Where the bloody hell did I leave the car?" That made me laugh. Her personality comes through loud and clear from the moment we see her here. <g> And BJR does look handsome in this shot, which seems right.

Page 7: For all the talk about Claire's hair over the last couple of years (on Diana's blog, and in this thread from 2008 on Compuserve), it looks right to me on this page. The fourth panel, especially, looks like what I imagined. Curls erupting in all directions <g>, and the color seems right. I love the way her eyes bulge with shock and outrage when he kisses her.

And I am wondering now about Murtagh. He thinks Claire is "the faery's mate" (whatever that means) and then he hears her telling BJR that her husband is nearby....no wonder he got curious enough to investigate. Here's what Diana said about that:

His response--and the reference to "the faery's mate" will all be perfectly clear when you see what happened on the pages prior to this one.

Overall, I'm really impressed with the way these pages turned out. Much better than I imagined at first. I am really looking forward to September! (For those of you who don't know, the release date for THE EXILE is September 21, 2010.)

I've pre-ordered a signed copy of THE EXILE from the Poisoned Pen bookstore, and I would encourage any of you who are interested to do likewise. The link is here. They ship anywhere in the world.

The discussion about the EXILE preview on Compuserve is here, if you'd like to tell Diana what you think. She's always very interested in hearing from her readers and fans.

I was really glad to see the author's ideas of what Claire and Jamie should look like. The images are BEAUTIFUL and I cannot wait to read the entire graphic novel.

just wondering about Claire's hair. Isn't this the late 1940's. When a women's hair is not "up" does is it historically accurate to look the way it does in the rendering. I think I was expecting her eye's to be more honey colored.

Good point about Claire's hair. Not only that; it was shorter when she went through the stones. I assumed she had one of those typical 40s styles that just touched the shoulder... because someone even mentioned the length (Jamie?) and asked why she wore it short. And Jamie's hair is longer than I expected because they had shaved his head in France at the abbey, right?

Carol - yes, you're right on both counts. So what did you think of the infamous Murtagh spoiler? :-) You've seen it by now, I take it?