My reactions to the SCOTTISH PRISONER audiobook 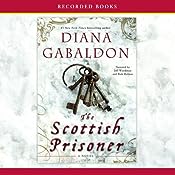 I finished listening to the audiobook of THE SCOTTISH PRISONER for the first time last night.  For those of you who don't know, this audiobook has two narrators: Jeff Woodman, who reads the parts from Lord John's point of view, and Rick Holmes, who reads the parts from Jamie's point of view.  (Jeff Woodman is the narrator for the other Lord John books.)

Here are some of my reactions:

Overall, I thought it was quite enjoyable.  I think they were right to go with dual narrators for a two-person book like this, and it was interesting to see how they switched back and forth.

Jeff Woodman did an excellent job, as usual.  Such a pleasure hearing him do Lord John, Tom, Hal, Harry, and Stephan von Namtzen's voices again. <g>

Woodman's co-narrator, Rick Holmes, did reasonably well.  His Jamie-voice is too high-pitched (I think of Jamie as having a deep voice) and at times it was difficult to distinguish Holmes' narrative voice from the voices of the other characters, but I'm not really complaining.  I thought his narrative voice was rather soothing, especially in the beginning of the book.

My favorite scene from John's half was Jamie's outburst in Chapter 31:  "You dare to speak to me of honor?"  I thought that was extremely well done.  And my favorite John-and-Jamie scene was the one in chapter 35 where they discuss Twelvetrees' death.

I loved the "Amplexus" chapter.  Somehow it's easier for me to picture the scene when I can close my eyes as it's being read, envisioning the two men walking through the woods at night, with the sound of frogs all around them.  That was fun.  And spooky!

I was pleased to hear Rick pronounce "Keren" exactly the way I say my own name. <g>  That made me giggle.  (For those of you who haven't seen Diana's explanation in the Acknowledgements to SCOTTISH PRISONER:  the "Keren-happuch" character is named after me.)

A couple of nits:  At the very beginning of the book, Rick says the title of Section I incorrectly as "The Fate of the Fuses", where it should be just "The Fate of Fuses".  And I was disappointed to find that John's line on p. 337 ("the boy has a little small fever but, with the blessing, all will be well in a day or two") was not, in fact, spoken with an imitation of an Irish accent, as I hear it in my head.  (Oh, well.  That could just be me, though.)

I liked Jeff's take on Quinn better than Rick's -- more emotion in his voice, or something.  On the other hand, I liked Rick's Lord Dunsany much better than the high-pitched old-man's voice Jeff used for him.

By the end, I found that I liked Jeff's attempt at a Scottish accent better than Rick's.  (Though neither of them sound much like the Jamie I hear in my head. <g>)  I also thought Jeff did a better job at conveying a range of emotions than Rick did.

I enjoyed the audiobook quite a bit, and I would certainly recommend it to anyone who liked SCOTTISH PRISONER.  You can download it from audible.com here.
audible.com audio books diana gabaldon jeff woodman rick holmes the scottish prisoner

To be perfectly honest, I'm having a really difficult time getting into Scottish Prisoner. It's just not pulling me in, perhaps I will give it another try. It is a snowy day and I don't plan on going out.

I'm always surprised to hear Geneva pronounced like the city. I've always heard it as "GEN-e-vah" in my head.

I'm only a few chapters into the audiobook, but I'm enjoying it a lot so far.