1) St. Hildegard von Bingen (1098-1179) was "a German writer, composer, philosopher, Christian mystic, Benedictine abbess, visionary, and polymath."  The image of Hildegard von Bingen shown above comes from an illuminated manuscript called the Rupertsberg SCIVIAS-Codex, dated 1175.  (Click on the photo to enlarge it.)

Here's Diana Gabaldon's explanation, from the OUTLANDISH COMPANION, of how she came up with the name of Mother Hildegarde in DRAGONFLY IN AMBER:


Mother Hildegarde was another who named herself. Having decided upon her profession and avocation, I set out to write her, and found the name “Hildegarde” being insistently shoved under my nose. Nonsense, I said, I don’t think Hildegarde is even a French name. Surely she ought to be Berthe or Matilde or something. But no, it was “Hildegarde” and nothing else.

Fine, I said, already used to argumentative characters. Have it your way, Hildegarde. We can always change it later, if the copy editor tells me it isn’t French.

A year or two later, I found myself in London, in a store called Past Times, which specializes in the reproduction of art and artifacts from...er...past times. They had a rack of musical recordings, compositions dating from the tenth century to the twentieth, performed on period instruments and according to the performance conditions appropriate to the time of the composition. Finding this interesting, I thumbed through the rack, only to find a tape of songs composed by...one Mother Hildegarde.

Hildegarde von Bingen, to be exact (as I recall, my actual exclamation at the time was, “Ha! So it isn’t French!“). A mystic, a composer--and an abbess--from the twelfth century. But Mother Hildegarde, nonetheless.

St. Hildegard has been in the news very recently, in fact.  On October 7, 2012, Pope Benedict XVI named Hildegard von Bingen a "Doctor of the Church" -- one of only 35 people ever to be given this title. According to this article from the Catholic News Agency,


The title of Doctor of the Church is bestowed upon a saint whose writings are deemed to be of universal importance to the Church. The Pope must also declare the individual to be of “eminent learning” and “great sanctity.” Other Doctors of the Church include St. Augustine, St. John Chrysostom, St. Francis de Sales, and St. Catherine of Siena.

She sounds like a remarkable woman, doesn't she?  It seems very fitting that Diana's Mother Hildegarde should share her name. 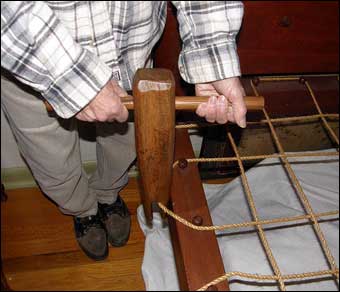 2) I had never heard of a rope bed before I read A BREATH OF SNOW AND ASHES. This article explains how to make your own rope bed, and how to use a wooden "bed key" (like the one shown in the photo above) to tighten the ropes.


I piled up the pillows at the head of the bed--pausing to remove the dirk--then began to climb onto it. I paused again, though, and instead bent to wind the bedkey, tightening the ropes that supported the mattress until the bedstead groaned and the ropes gave a creaking twang.

“Experience,” I informed him, clambering over the newly tautened bed on hands and knees. “I’ve waked up often enough after a night with you, with the mattress folded up round my ears and my arse no more than an inch off the ground.”

“Oh, I expect your arse will end up somewhat higher than that,” he assured me. 3) Comfrey (shown above) is one of Claire's most useful herbs.  It can be used to treat sprains, bruises, and even broken bones.  Claire often uses comfrey as an ingredient in poultices and salves, but the very first time it's mentioned in the series, just after her arrival at Castle Leoch, we see her brewing a tea with it:


I threw several cloves of peeled garlic into the boiling water with some of the witch hazel, then added the cloth strips to the mixture.  The boneset, comfrey, and cherry bark were steeping in a small pan of hot water set by the fire.  The preparations had steadied me a bit.  If I didn't know for certain where I was, or why I was there, at least I knew what to do for the next quarter of an hour.

Here's an article that explains the medicinal uses of comfrey, including instructions on how to make your own comfrey poultice. 4) The photo above shows the title page from the 1773 edition of Harris's List of Covent Garden Ladies.  Click here to see a bigger version, along with a couple of sample pages.  (It's easier to read the 18th-century text if you remember that "s" looks like "f".)  I think it's pretty funny, myself, but see what you think.

This may not be precisely the same edition of Harris's List that William had in ECHO, but it's clearly very simlar:


A general cry of “What book? What book? Let us see this famous book!” resulting, he was obliged to produce the prize of his collection of gifts--a copy of Mr. Harris’s famous List of Covent Garden Ladies, this being a lavishly descriptive catalog of the charms, specialities, price, and availability of the best whores to be found in London.

Its appearance was greeted with cries of rapture, and following a brief  struggle over possession of the volume, William rescued it before it should be torn to pieces, but allowed himself to be induced to read some of the passages aloud, his dramatic rendering being greeted by wolflike howls of enthusiasm and hails of olive pits.

Reading is of course dry work, and further refreshment was called for and consumed. He could not have said who first suggested that the party should constitute itself an expeditionary force for the purpose of compiling a similar list for New York.

If you want to read Harris's List for yourselves, you can look for a copy of this book, published in 2005 by Hallie Rubenhold.  I haven't read it myself, but from the description, it appears to be a sort of greatest-hits collection <g>, featuring "the funniest, ruddiest, and most surreal entries penned by Jack Harris, 'Pimp-General-of-All-England'." 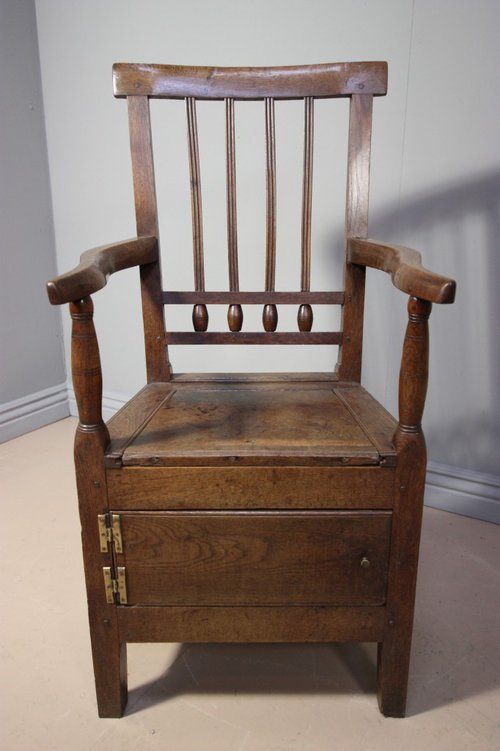 5) Here's an example of an 18th-century commode chair similar to the one Brianna used at River Run while she was pregnant in DRUMS.  The seat cover lifts up or slides forward, and the chamber pot is discreetly hidden in the cupboard underneath.  You can see more photos here.


The commode was magnificent, a beautiful piece of smooth carved walnut that mingled appeal with convenience. Particularly convenient on a rainy, cold night like this. She fumbled sleepily with the lid in the dark, lit by lightning flashes from the window, then sat down, sighing with relief as the pressure on her bladder eased.

Evidently pleased with the additional internal space thus provided, Osbert performed a series of lazy somersaults, making her belly undulate in ghostly waves beneath her white flannel nightgown. She stood up slowly--she did almost everything slowly these days--feeling pleasantly drugged with sleep.

Here's another style of commode chair from the 18th century, designed to fit into a corner.  It's more elegant in design, made to blend in with the decor of the room as much as possible.  Note the side flaps that lift up to allow easy access to the chamber pot underneath.

Wondering what it looks like on the inside? My sister took a photo of a 19th-century example of one of these commodes when we visited Castle Fraser in Scotland in July.

I suppose if you can't have indoor plumbing (something that I would most definitely miss if I traveled back to the 18th century!), these commodes are about as close as you can get, in terms of comfort and convenience. <g>

Hi, Karen, I'm a huge fan of your FFFs! I love that you posted the info about Hildegarde. Hildegarde von Bingen's music is sublime. I hope you get a chance sometime to listen to her work. Also, there are a couple of movies about her life. One is called "Hildegarde," which is a British production and very well done. Another is called "Vision" and is a German production. Both are available on Netflix, as far as I know.

I'm not sure if this is true or not but I heard that the children's night time chant: "Good night, sleep tight . . ." referred to making sure the ropes on the bed were tight so one wouldn't sag.