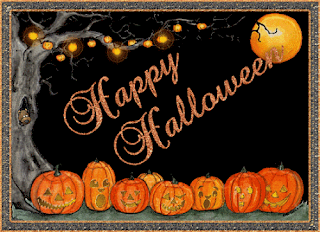 Here are some of my favorite Halloween-themed quotes from Diana Gabaldon's books and stories.  I first posted a version of this collection in 2009, and it's become an annual holiday tradition. <g> Hope you enjoy them!

3) Claire and Roger on Halloween night, 1968.  If you're not familiar with the story Roger is referring to, look here.

6) Here's one of the creepiest moments in the whole series, in my opinion:

8) I don't care how many times I've read this, it still sends a chill up my spine, every time.

9) Lord John's encounter with a zombie:

And last but not least, here's Bri's Pumpkin Homage to THE EXILE.  I think this is truly hilarious (particularly if you've seen page 5 of THE EXILE), not to mention extremely creative.  Can you imagine the amount of time and effort it took to do that?  Amazing!

Happy Halloween / Samhain / All Hallows' Eve to all of you!
diana gabaldon halloween quotes outlander

Good morning Karen and thanks once more for the wonderful job ! I wrote down some of the Halloween-themed quotes for reference when re-reading the books (currently re-reading "Voyager"); the one I love best indeed is from the FC-chapt.29, really creepy ! greetings from Paris

I would also add Jamie's encounter with the Wild Hunt in Lord John and the Scottish Prisoner - very creepy.

And the best one (if actually about the Feast of All Hallows rather than the Eve of...) from ECHO IN THE BONE, Chapter 72:

"The nuns had always told them - and she'd told him. By saying an Our Father, a Hail Mary, and a Glory Be on the Feast of All Saints, you can obtain the release of a soul from Purgatory."

Thank you Karen loved these and the pumkin pic