1) The portraist above shows King Louis XV of France, as he looked in 1748, only four years after Jamie and Claire met him.  Louis XV inherited the throne at the age of five, in 1715, upon the death of his great-grandfather, the "Sun-King", Louis XIV. King Louis had a mistress by the name of Marie-Anne de Mailly-Nesle de la Tournelle, duchesse de Châteauroux.  The portrait above is from 1740.  (Click on the image for a bigger view.)  It's not difficult at all to imagine them at the ball at Versailles where Claire met them:


I had forgotten the red dress; His Majesty halted directly in front of me and bowed extravagantly, hand over his waist.

"Chère Madame!" he said. "We are enchanted!"

I heard a deep intake of breath from Jamie, and then he stepped forward and bowed to the King.

"May I present my wife, Your Majesty--my lady Broch Tuarach." He rose and stepped back. Attracted by a quick flutter of Jamie's fingers, I stared at him for a moment of incomprehension, before suddenly realizing that he was signaling me to curtsy.

I dipped automatically, struggling to keep my eyes on the floor and wondering where I would look when I bobbed up again. Madame Nesle de la Tourelle was standing just behind Louis, watching the introduction with a slightly bored look on her face. Gossip said that "Nesle" was Louis's current favorite. She was, in current vogue, wearing a gown cut below both breasts, with a bit of supercedent gauze which was clearly meant for the sake of fashion, as it couldn't possibly function for either warmth or concealment.

The spelling of the real Madame Nesle's name is slightly different, but she does appear to be the same person mentioned in DRAGONFLY. 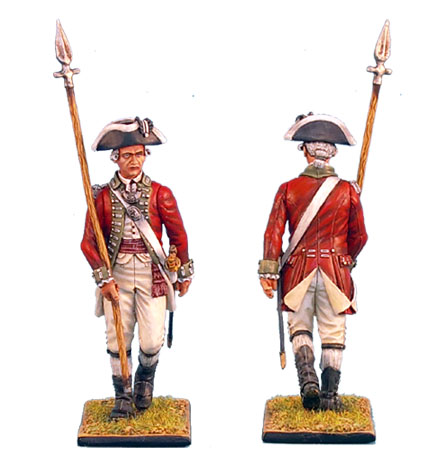 2) As an officer in the British Army, William carried a spontoon in battle.


"Sir, sir!” He looked down to see a short private soldier, perhaps no older than William himself, plump-cheeked and anxious.

“Your spontoon, sir. And your horse has come,” the private added, gesturing at the rangy light bay gelding whose reins he held. “Captain Griswold’s compliments, sir.”

William took the spontoon, seven feet long, its burnished steel head gleaming dully even under the clouded sky, and felt the weight of it thrill through his arm.

The photo above shows a hand-painted miniature depicting an officer in the British 5th Regiment of Foot, at the time of the American Revolution.  I've included it here because it gives you some idea of the size of the spontoon.  Look here for some close-up photos of an actual 18th-century English spontoon. 3) Jamie's dirk had a moonstone in the hilt:


He held the dirk by the blade, upright so that the rising sun caught the moonstone in the hilt and made it glow. Holding the dagger like a crucifix, he recited something in Gaelic. I recognized it from the oath-taking ceremony in Colum's hall, but he followed it with the English translation for my benefit:

"I swear on the cross of my lord Jesus, and by the holy iron which I hold, that I give ye my fealty and pledge ye my loyalty. If ever my hand is raised against you in rebellion or in anger, then I ask that this holy iron may pierce my heart."

According to this article about moonstones,


The moonstone symbolises our being in its entirety. With its soft shimmer, it strengthens our emotional and subconscious aspects. The associations connected with that make it a "lovers' stone", evoking tender feelings and safeguarding the true joys of love. It is also said that wearing a moonstone strengthens our intuition and our capacity to understand. 4) Jocasta's husband, Hector Cameron, died of the "morbid sore throat", as we learned in DRUMS:


Once arrived in the New World, Hector had purchased a large tract of land, cleared the forest, built a house and a sawmill, bought slaves to work the place, planted his land in tobacco and indigo, and--no doubt worn out by so much industry--succumbed to the morbid sore throat at the ripe old age of seventy-three.

Diana Gabaldon has said that the "morbid sore throat" was the 18th-century term for the disease we now call diphtheria.  Diphtheria is caused by a bacterium called Corynebacterium diphtheriae (pictured above).


Diphtheria usually begins with a sore throat, slight fever, and swollen neck. Most commonly, bacteria multiply in the throat, where a grayish membrane forms. This membrane can choke the person. Sometimes, the membrane forms in the nose, on the skin, or other parts of the body. The bacteria can release a toxin that spreads through the bloodstream and may cause muscle paralysis, heart and kidney failure, and death.

The disease is highly contagious, and can spread via airborne droplets, such as when an infected person coughs or sneezes. Today, children are routinely immunized against it (as part of the DTaP vaccine), but in the 18th century it was often fatal. 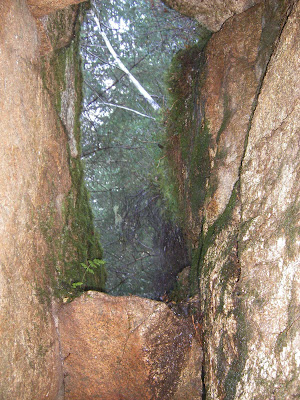 5) The legend of the Dunbonnet in VOYAGER is based on a real historical figure, a laird named James Fraser. <g>


James Fraser, 9th of Foyers, was on very friendly terms with Simon, 13th Lord Lovat, later to be executed for his part in the 1745 Rising, and on that account, Foyers joined Lovat in supporting Prince Charles during his short reign in Edinburgh as King James VIII.

Foyers was excluded from the Act of Parliament pardoning treasonable offences committed in the rebellion, and was forced to live in hiding for seven years after the rebellion. One of his favourite haunts was a cave, a mile to the west of the Falls of Foyers. One day, on looking out of the cave, the laird saw a Red Coat secretly following a girl bringing food for him and, as to avoid capture was a matter of life and death to him, the laird shot the soldier who was buried where he fell. So Foyers's whereabouts could be kept secret, the inhabitants used to speak of him by the nickname "Bonaid Odhair" (Dun Coloured Bonnet).

The photo above comes from Alastair Cunningham's Living with Clans and Castles blog. This is the view from the inside of a cave near Foyers that Cunningham visited in 2007. It seems to match the description of Jamie's cave pretty well.


It was barely eight feet long, but the far end was lost in shadow. She lifted her chin, seeing the soft black stains that coated the rock to one side by the entrance.

“That’s where my fire was—when I dared have one.” His voice sounded strange, small and muffled, and he cleared his throat.

“Where was your bed?”

“Just there by your left foot.”

“Did you sleep with your head at this end?” She tapped her foot on the graveled dirt of the floor.

“Aye. I could see the stars, if the night was clear. I turned the other way if it rained.” She heard the smile in his voice and put her hand along his thigh, squeezing.

“I hoped that,” she said, her own voice a little choked. “When we learned about the Dunbonnet, and the cave… I thought about you, alone here--and I hoped you could see the stars at night."

As always, well done. I'd always meant to look up morbid sore throat. I love history if medicine (one if a gazillion reasons I love these books!) and was always curious about that. I don't think it's the only case of morbid sore throat mentioned so now we know :) Thanks Karen!

I'm re-listening to Dragonfly in Amber. Haven't yet gotten to the French court, but that dress below the nipples is crazy. Those were truly Girls Gone Wild.

I don't think this kind of dress really existed in the french court. Didn't find any mention of this.

I don't know about at court (I'm thinking that Madame de Tourelle is being depicted here as one of the Greek goddesses, though I'm at a loss as to which.), but there are fashion plates from that time of gowns that end both just above and just below the areola. In a few I saw, the bodice seems to stop a bit below the areola and roughly the middle third of the breasts are swathed in a loose rapping of twisted gauze of some kind. Even if the majority of the breast was covered when the lady was being dressed, throughout a day or at a party the gauze sometimes began to droop or slip, revealing her areolae and nipples and maybe even a bit more of her breasts below them. And as far as I've read, in the upper crust of French society this happening was hardly noticed. At the very least it wasn't commented on.

Now, the way the series brought this to life, with the bodice ending under the entire breast, much where the underwire of a modern bra would rest, no, there doesn't seem to be much, if any, record of that, but of having the nipple and areolae visible in a very similar way as in that portrait, yes, that happened and those gowns existed.
Though, given the art of the period I'd reckon her breast is bared in it as much, if not so more for aesthetic than for the fashion of the gown. The same artist did a portrait of Madame Pompadour as Artemis, the goddess of the hunt, where her breasts aren't quite as bare as Madame de la Tourelle's but nearly so.
So, even though some gowns did exist that bared the breasts to some considerable degree, I think her breast is bared so completely in this painting in order to bring the aesthetic of the Ancient Greek marble statues, sculpted friezes, and other surviving pieces.

Of course, I am no expert on the history of fashion or of art history (though both are immensely fascinating to me, and if money and time were no object, I would have majored in Art History in college, and given the opportunity would enroll again and do it now.) so if anyone stumbles across my post and wishes to correct me, please do.