1) I was surprised to learn in THE SCOTTISH PRISONER that Jamie was familiar with Punch and Judy.


He’d seen things like this in Paris, often. Wee puppets posturing and squeaking. These were long-nosed, ugly ones, shouting in shrill insult and hitting one another with sticks.

He was breathing easier now, dizziness and fear leaving him as the sheer ordinariness of the day closed round him like warm water. Punchinello—that was the man-puppet’s name—and his wife was Judy. She had a stick, Judy did, and tried to strike Punch on the head with it, but he seized the stick. She whipped it up, and Punch, clinging to it, sailed across the tiny stage with a long drawn-out “Shiiiiiit!” to crash against the wall. The crowd shrieked with delight.

Here is a short video of a modern Punch and Judy show.

Here's some information on the history of Punch and Judy shows.  Bonus fun fact: Punch's distinctive squawking voice -- Wikipedia describes it as "a vocal quality as though he were speaking through a kazoo" -- is produced by means of a device known as a swazzle. 2) The photo above shows a silkworm (Bombyx mori) on a mulberry leaf, along with a cocoon made of silk.  (Photo credit: Eeva47 on Flickr.)  I didn't know anything about the connection between mulberry trees and silkworms until I read DRUMS OF AUTUMN.


"Where does this silk come from?” I asked. “It isn’t China silk; is it French?”

The sempstress looked up, her crossness temporarily relieved by interest.

“No, indeed it’s not. That’s made in South Carolina, that is. There’s a lady, Mrs. Pinckney by name, has gone and put half her land to mulberry trees, and went to raising silkworms on ’em. The cloth’s maybe not quite so fine as the China,” she acknowledged reluctantly, “but ’tisn’t but half the cost, either."

The sempstress was referring to Eliza Lucas Pinckney.  Here's an excerpt from a letter written by her husband, Charles Pinckney, on April 1, 1755:


Can any thing then more strongly point out that Nature intend these Climates to be Silk Countries, in which She has so liberally provided the only proper food for the Silkworms - And we have our own Experience to demonstrate the little Silk hitherto made in these Countries is as good as is made in any part of the World. The piece that I had the honour to present to her Royal Highness the Princes of Wales for a suit of Cloaths the last winter was of Mrs Pinckneys own making on my Plantation near Charles Town in South Carolina, and was as good in the Judgment of the Manufactures & Mercers, as any ever made of the Sort.

3) You may recall that Jamie had a copy of John Brickell's THE NATURAL HISTORY OF NORTH CAROLINA.  As you can see from the cover photo above, this is a real book, published in 1737.


"That’s a fine wee book, Uncle Jamie,” Ian said, with approval. “Does it say more about the snakes?” He looked hungrily over the expanse of table, in search of more food. Without comment, I reached into the hutch and brought out a plate of spoonbread, which I set before him. He sighed happily and waded in, as Jamie turned the page.

“Well, here’s a bit about how the rattlesnakes charm squirrels and rabbits.” Jamie touched his plate, but encountered nothing save bare surface. I pushed the muffins toward him.

“ ‘It is surprizing to observe how these Snakes will allure and charm Squirrels, Hedge-Conneys, Partridges and many other small Beasts and Birds to them, which they quickly devour. The Sympathy is so strong between these, that you shall see the Squirrel or Partridge (as they have espied this Snake) leap or fly from Bough to Bough, until at last they run or leap directly into its Mouth, not having power to avoid their Enemy, who never stirs out of the Posture or Quoil until he obtains his Prey.’ ”

His hand, blindly groping after sustenance, encountered the muffins. He picked one up and glanced up at me. “Damned if I’ve ever seen that, myself. D’ye think it likely?"

If you want to read this book for yourself, it's available online here in various electronic formats.  The bit Jamie is reading in the scene quoted above comes from pp. 144-145 of Brickell's book. The photo above shows some of the illustrations of flora and fauna from the book.  If some of them look familiar to you, that may be because Diana included a number of these drawings in the OUTLANDISH COMPANION. 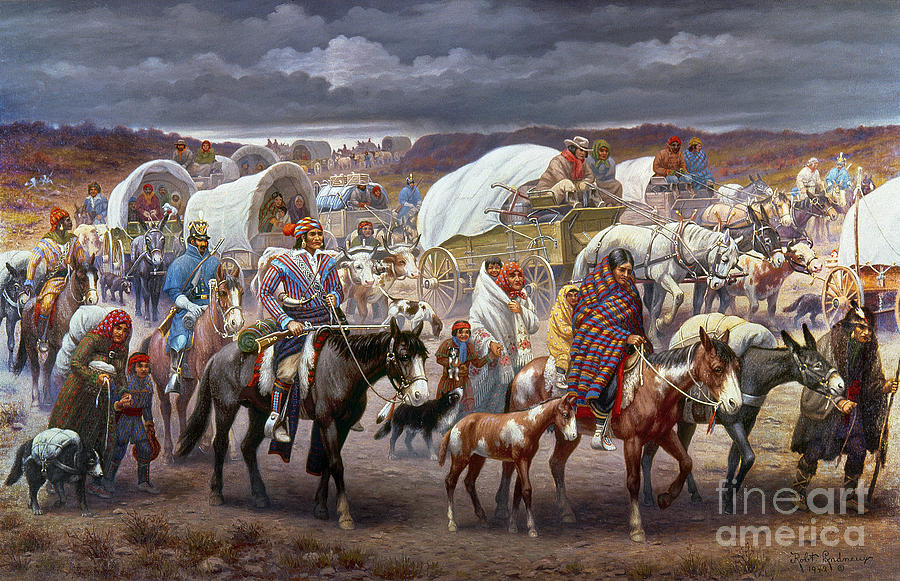 4) The painting shown above, by Robert Lindneux (1942), commemorates the suffering of the Cherokee people on the "Trail of Tears" in the 1830s.  Click on the picture for a bigger view.


"About sixty years from now,” she said at last, eyes on the ground, “the American government will take the Cherokee from their land and move them. A long way--to a place called Oklahoma. It’s a thousand miles, at least, and hundreds and hundreds of them will starve and die on the way. That’s why they called it--will call it--the Trail of Tears.”

He was impressed to hear that there should be a government capable of doing such a thing, and said so. She shot him an angry glance.

“They’ll do it by cheating. They’ll talk some of the Cherokee leaders into agreeing by promising them things and not keeping their bargain.”

He shrugged. “That’s how most governments behave,” he observed mildly. “Why are ye telling me this, lass? I will--thank God--be safely dead before any of it happens.”

He saw a flicker cross her face at mention of his death, and was sorry to have caused her distress by his levity. Before he could apologize, though, she squared her shoulders and went on.

“I’m telling you because I thought you should know,” she said. “Not all of the Cherokee went--some of them went farther up into the mountains and hid; the army didn’t find them."

Here is a brief history of the forced relocation of the Cherokee. The Cherokee phrase is "nu na hi du na tlo hi lu i", or "The Trail Where They Cried".

5) The photo above shows a pair of manatees (Trichechus manatus), like the ones Jamie and Claire saw in Jamaica.

There was a small herd of manatees in the lagoon, big gray bodies gliding under the dark crystal water, rising gleaming like smooth, wet rocks. Birds were beginning to call in the trees near the house; besides this, the only sound was the frequent whoosh of the manatees’ breath as they rose for air, and now and then an eerie sound like a hollow, distant wail, as they called to each other.

We watched them in silence, side by side. The lagoon began to turn green as the first rays of sun touched its surface. In that state of extreme fatigue where every sense is preternaturally heightened, I was as aware of Jamie as though I were touching him.

Did you know manatees are related to elephants?  Look here for more information about manatees.

Excellent FFF today, Karen. All of these are poignant to me. ; )

Great post as usual. What strikes me is how much research goes into one statement in the books. For instance using your silk worms section. How long did it take Diana to research silkworm farming just to make that wee paragraph. That's why I can appreciate how long it takes for her books to be written and why I dont pester her asking when they are going to be finished.
I appreciate the accuracy. Fabulous!