1) Here are a couple of photos of Percheron horses. This is the same breed that Jamie and Claire went to see in DRAGONFLY IN AMBER:


Percherons are very large horses. A big one stands over five feet at the shoulder, and the rump of a well-fed mare is almost a yard across, a pale, dappled gray or shining black, adorned with a waterfall of black hair, thick as my arm at the root of it.

The stallion burst from his stall toward the tethered mare with a suddenness that made everyone fall back from the fence. Puffs of dust flew up in clouds as the huge hooves struck the packed dirt of the pen, and drops of saliva flew from his open mouth. The groom who had opened his stall door jumped aside, tiny and insignificant next to the magnicent fury let loose in the pen.

The mare curvetted and squealed in alarm, but then he was on her, and his teeth closed on the sturdy arch of her neck, forcing her head down into submission. The great swathe of her tail swept high, leaving her naked, exposed to his lust.

For more about Percherons, visit the Percheron Horse Association of America website, or look here for some photos from a family-run farm in Hampshire, England, that specializes in breeding Percherons. 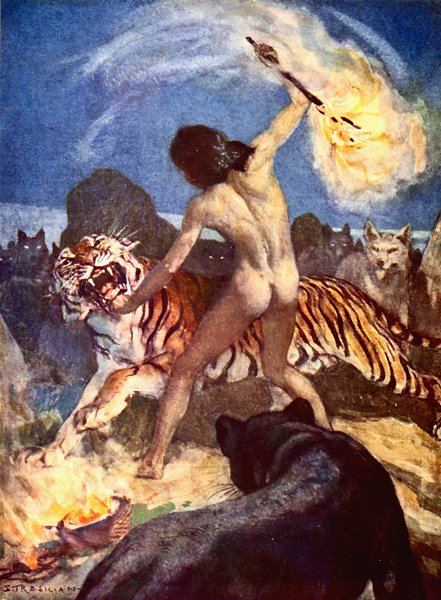 2) Claire is apparently very familiar with the story of Mowgli and the Red Flower, from THE JUNGLE BOOK by Rudyard Kipling.


"I have it!" said Bagheera, leaping up. “Go thou down quickly to the men’s huts in the valley, and take some of the Red Flower which they grow there, so that when the time comes thou mayest have even a stronger friend than I or Baloo or those of the Pack that love thee. Get the Red Flower.”

By Red Flower Bagheera meant fire, only no creature in the  jungle will call fire by its proper name. Every beast lives in deadly fear of it, and invents a hundred ways of describing it.

“The Red Flower?” said Mowgli. “That grows outside their huts in the twilight. I will get some.”

“There speaks the man’s cub,” said Bagheera proudly. “Remember that it grows in little pots. Get one swiftly, and keep it by thee for time of need.”

The illustration above shows Mowgli attacking Shere Khan with a blazing torch.  Seeing Jamie struggling with the bear, Claire remembered the Kipling story, but lacking a suitable branch to use as a torch, her response was somewhat different:


With vague thoughts of Mowgli and the Red Flower, I scrabbled madly over the damp earth in the clearing, finding nothing but small pieces of charred stick and glowing embers that blistered my fingers but were too small to grip.

My hand fell on something cold and clammy; the fish, tossed aside at the edge of the fire clearing.

“To hell with the Red Flower,” I muttered. I seized one of the trout by the tail, ran forward, and belted the bear across the nose with it as hard as I could.

3) The photo above shows what a nannyberry bush (Viburnum lentago) looks like in the autumn, around the time of year that the Gathering in THE FIERY CROSS took place.


"Is there a difficulty, Mr. Wemyss?”

Mr. Wemyss was delayed in answering, having become inextricably entangled with the nannyberry bush, and I was obliged to go and help release him. A onetime bookkeeper who had been obliged to sell himself as an indentured servant, Mr. Wemyss was highly unsuited to life in the wilderness.

“I do apologize for troubling ye, sir,” he said, rather red in the face. He picked nervously at a spiny twig that had caught in his fair, flyaway hair.

Every article I could find about the Viburnum lentago mentions the suckers that form at its base.  Evidently those are what trapped poor Mr. Wemyss. <g>


4) Here is a short two-part video by Australian Keith H. Burgess, showing how to make lead musket balls using a bullet mold, exactly as Jamie did in ABOSAA.  (If you have trouble viewing the videos, you can see them on YouTube: Part 1 and Part 2.)  The close-up view of the bullet mold and ladle starts at about 2:40 into the first video.


The militant smell of hot lead began to permeate the room, competing with the Major’s pipe smoke, and quite overpowering the pleasantly domestic atmosphere of rising bread, cooking, dried herbs, scouring rushes, and lye soap that normally filled the kitchen.

Lead melts suddenly; one instant, a deformed bullet or a bent button sits in the ladle, whole and distinct; the next, it’s gone, a tiny puddle of metal shimmering dully in its place. Jamie poured the molten lead carefully into the mold, averting his face from the fumes.

The photo above shows a bullet mold and several lead balls that belonged to Robert Burns, circa 1790.

5) The photo above, from Wikipedia, shows a plant called Aconitum variegatum.  Aconitum is "the queen of poisons", known by a variety of names such as aconite, monkshood, wolf's bane, leopard's bane, women's bane, and Devil's helmet.  Claire used aconite poison to end the life of the slave impaled on the hook in DRUMS OF AUTUMN:


Numbness. Tingling. A sensation of the skin crawling, as though affected by insects. Nausea, epigastric pain. Labored breathing, skin cold and clammy, features bloodless. Pulse feeble and irregular, yet the mind remains clear.

None of the visible symptoms were discernible from those he already showed. Epigastric pain, forsooth.

One-fiftieth grain will kill a sparrow in a few seconds. One-tenth grain, a rabbit in five minutes. Aconite was said to be the poison in the cup Medea prepared for Theseus.

I tried to hear nothing, feel nothing, know nothing but the jerky beat beneath my fingers. I tried with all my might to shut out the voices overhead, the murmur nearby, the heat and dust and stink of blood, to forget where I was, and what I was doing.

Here's more information about aconite.  According to WebMD,

It sounds like something that should be used only with extreme caution by people who know what they are doing!

Fascinating! You do such a good job, Karen, scrounging up these tidbits of information for us each week. Thank you.

Love to read your FFF Karen! And congratulations about the acknowledgements in ATF! I'm sure they are more than truly deserved.
Regards, Viviana

Your Friday posts are so interesting. I always enjoy them! Surprisingly, I recognize the aconite from last week's episode of Dexter. I hadn't realized or remembered that Claire used it in Drums of Autumn.

even bigger horses in northern France on the seaside near the city of Boulogne, the horses called " boulonnais "...huuuuge beasts !

thank you Karen ,I very much enjoy your FFF !
Camilla