1) Did you ever wonder why Stephen Bonnet's ship in A BREATH OF SNOW AND ASHES was called the Anemone? The term "anemone" can refer to a type of flower, or a marine animal, but I think Bonnet's ship is named for the latter. 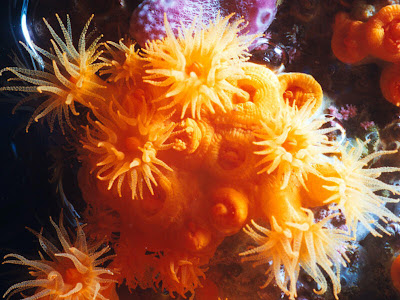 The pictures above show several different species of sea anemones (scientific name: Actiniaria).  Click on the photos to enlarge them.  According to Wikipedia, sea anemones are "a group of water-dwelling, predatory animals" that use venom to catch fish and crustaceans.


They had no trouble in finding persons familiar with Anemone and her captain. Stephen Bonnet was well-known on the Edenton docks, though his reputation varied, depending on his associations. An honest captain was the usual opinion, but hard in his dealings. A blockade runner, a smuggler, said others--and whether that was good or bad depended on the politics of the person saying it. He’d get you anything, they said--for a price.

Pirate, said a few. But those few spoke in low tones, looking frequently over their shoulders, and strongly desired not to be quoted.

Water-dwelling?  Yes, that certainly fits Stephen Bonnet, the infamous pirate.  Predatory?  Definitely!  Venomous?  I wouldn't argue with that, especially when you consider what he did not only to Brianna, but to Marsden, the man he blinded following a duel in FIERY CROSS.

Look here for more photos of sea anemones.  I think they're beautiful and exotic-looking -- but dangerous! 2) The photo above shows a small prehistoric stone carving known as the Venus of Willendorf.  It seems very similar to the small fertility charm Mrs. Bug gave to Claire in THE FIERY CROSS:


It was a small chunk of stone, pale pink in color, and veined with gray, badly weathered. It had been crudely carved into the shape of a pregnant woman, little more than a huge belly, with swollen breasts and buttocks above a pair of stubby legs that tapered to nothing.  I had seen such figures before--in museums. Had Johnnie Howlat made it himself? Or perhaps found it in his pokings through wood and moor, a remnant of much more ancient times?

According to Wikipedia, the Venus of Willendorf and similar carvings are more than 20,000 years old.

Here's a short video with more information about the Venus of Willendorf.

3) The practice of tarring-and-feathering people in America dates back to at least 1766, but it became increasingly popular during the 1770s. The Bostonians Paying the Excise-Man (pictured above) is a British propaganda print from 1774 that depicts the tarring and feathering of Boston Commissioner of Customs John Malcolm.


"I wouldna have a lawyer up my backside at all,” Jamie was shouting happily, poking at Forbes with his broom. “He’d steal your shite and charge ye for a clyster!”

Forbes’s mouth opened, and his face went purple. He backed up a step, and seemed to be shouting back, but no one could hear his response, drowned as it was by the roar of laughter from the crowd.

“And then he’d sell it back to ye for night soil!” Jamie bellowed, the instant he could be heard. Neatly reversing his broom, he jabbed Forbes in the belly with the handle.

The crowd whooped in glee, and Forbes, no kind of a fighter, lost his head and charged Jamie, his own broom held like a shovel. Jamie, who had quite obviously been waiting for some such injudicious move, stepped aside like a dancer, tripped Forbes, and smacked him across the shoulders with the tar-smeared broom, sending him sprawling into the cooling tar puddle, to the raucous delight of the whole street.

Here's an essay on the history of tar and feathers in America, by Benjamin H. Irvin of Brandeis University.

4) This is a Scottish deerhound, similar to Jamie's dog, Bran.

"If those are the qualifications, then you're right," I said, inspecting Bran. "If his tail joint were any further from his head, you could ride him."

Here's an article about deerhounds.  "Gentle and very friendly....good around the kids."  Yeah, that seems right, based on the way Jamie describes them. <g>

(Note to nitpickers: These dogs are referred to in OUTLANDER by the term "staghound", but perhaps that's an archaic name for the breed or something?  Everything I could find online indicates they're called Scottish deerhounds.)

You may remember this Scottish deerhound named Hickory, who won Best in Show at the 2011 Westminster Kennel Club Dog Show.

5) Here's the version of "Clementine" that I grew up listening to, performed by the Weavers.  This album was released in the 1950s, so I like to think that both Claire and Bree would be familiar with this version.


“Light she was, and like a fairy—” He groped for the words to the song.

“AND HER SHOES WERE NUMBER NINE!” Roger abruptly raised the volume, causing startled silence both inside the tent and outside, in the kitchen. He cleared his throat and lowered his voice back to lullaby level.

The singing seemed to be having an effect. Jemmy’s eyelids had dropped to half-mast. He put a thumb in his mouth and began to suck, but plainly couldn’t breathe through his clogged nose. Roger gently pulled the thumb away, and held the little fist enclosed in his own. It was wet and sticky, and very small, but felt reassuringly sturdy.

Listening to this bit in FIERY CROSS the other day, I had tears in my eyes, thinking how sad it was that this might have been one of the last times Roger ever sang to Jemmy before the hanging.

I hope you enjoyed these Friday Fun Facts! Look here to see all of my Friday Fun Facts blog posts. And please stop by next week for more!
clementine friday fun facts scottish deerhound sea anemone tar and feathers venus of willendorf

Thanks for another good selection Karen!
I had forgotten that scene with Jamie and Neil Forbes. It must be time for a re-read.
I am trying to remember which cartoon character used to sing Clementine. That is what I remember! sad, eh?

Great column as always! Thanks! And in response to Bev, I had to look that up because I wondered the same thing -- I think it was Huckleberry Hound who sang Clementine.

Though a little bit late, Thanks Karen for your FFF selection ! I remember the song "Darling Clementine"too.As for the tarred-and-feathered people then, the experience should have been awful!!Looking fwd to next Friday !