Here are this week's Friday Fun Facts about Diana Gabaldon's books. This is a special "All Things Scottish" edition, in honor of Tartan Day on Saturday, April 6. 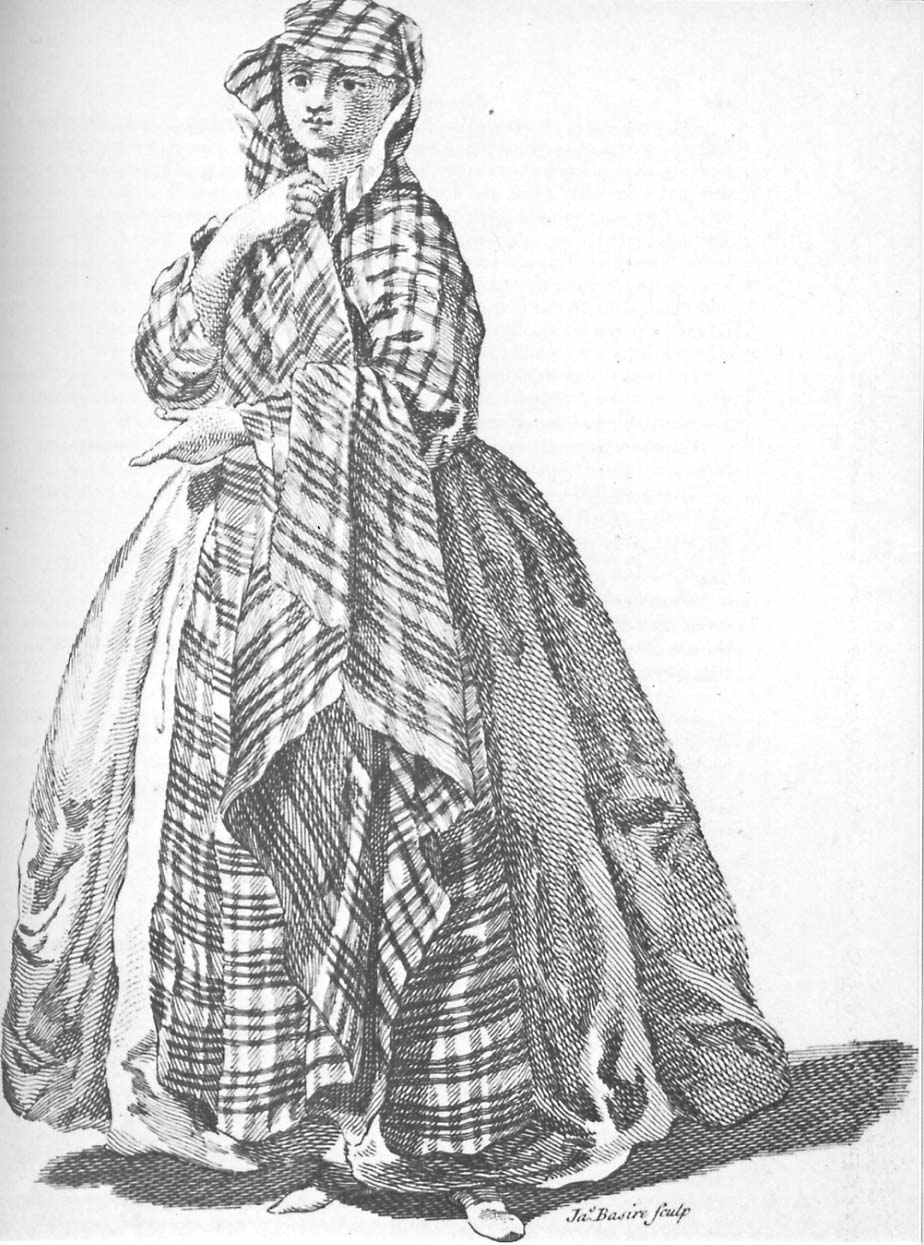 1) This illustration by James Basire (1745) shows a woman wearing an arisaid draped over her head as a shawl. Click on the picture for a bigger view.


I pulled my arisaid, a warm tartan shawl, tighter around my own shoulders, in response to the rising breeze. I had thought this few days’ stretch of warm weather a good omen; I hoped it hadn’t been deceptive.

Here is a modern recreation of an arisaid.  Look here for more photos.

Here's a site that explains the history of the arisaid, and how it was typically worn.  I was particularly entertained by this bit:

Can't you just imagine Hiram Crombie or Tom Christie, frowning in disapproval at the women napping beneath their arisaids during Sunday services? <g> 2) This stylized white rose is a Jacobite symbol.  I think it must be the same one that Geillis Abernathy chose to brand her slaves with, in VOYAGER:


The mark was about three inches long and three wide; a flower, surmounting the initial “A,” burned into the skin a few inches below the point of the shoulder. It was the right size, and in the right place, to match the scar on the man Ishmael. It wasn’t, however, a fleur-de-lys; that had been the mistake of a careless transcriber. It was a sixteen-petaled rose--the Jacobite emblem of Charles Stuart. I blinked at it in amazement; what patriotic exile had chosen this bizarre method of maintaining allegiance to the vanquished Stuarts?

Many of the Jacobite supporters during the Rising wore a white rose, or a white cockade (a bundle of ribbons) as a symbol of it, as Charles Stuart is wearing in the portrait shown above.  According to this site:


The White Cockade, as a Jacobite symbol, was born in Fassifern, Scotland. History recounts that Prince Charles Edward stayed overnight en route from Glenfinnan to Invergarry Castle on August 23rd 1745 at Fassfern House on the shore of Loch Eil, then home to John Cameron, younger brother of Lochiel....As he departed Fassifern House, “Bonnie Prince Charlie” plucked a white rose from a nearby bush and attached it to his blue bonnet thus becoming the famous White Cockade, the emblem of the Jacobites of the ‘45. It's not known how many of his followers also took a bloom, but the white rose immediately became the symbol of Jacobite support and continues thus to this day.

If you want to make your own cockade, you'll find step-by-step instructions here.

3) This is what bracken (Pteridium aquilinum) looks like.  Click on the photo for a bigger view.  (Photo credit: Photoseverywhere)


No, Jem had turned the other way. Where the devil could he be going? The dirt lane that led to the main road in one direction led absolutely nowhere in the other--it petered out where the land rose into steep, rocky hills.

And that, evidently, was where Jem was headed--for the hills. He turned out of the lane and began climbing, his small form almost obscured by the luxuriant growth of bracken and the drooping branches of rowan trees on the lower slopes. Evidently he was taking to the heather, in the time-honored manner of Highland outlaws.

In modern times, bracken is considered a very invasive plant that people go to great lengths to control and/or eradicate.  From Wikipedia:


Bracken is a characteristic moorland plant in the UK which over the last decades has increasingly out-competed characteristic ground-cover plants such as moor grasses, cowberry, bilberry and heathers and now covers a considerable part of upland moorland. Once valued and gathered for use as animal bedding, tanning, soap and glass making and as a fertiliser, bracken is now seen as a pernicious, invasive and opportunistic plant, taking over from the plants traditionally associated with open moorland and reducing easy access by humans.

4) This photo of a "Hieland coo" was taken at the Loch Lomond and Trossachs National Park, Scotland.  Click on the photo for a bigger view.  (Photo credit: Grant Glendinning, on Flickr.)


"On the other hand”--the guide’s crinkled eyes crinkled a bit more-- “’twas a family here from Lancashire a few years ago, cam’ rushin’ to the police station in Invermoriston, screamin’ as they’d seen the monster come out o’ the water and hide in the bracken. Said ’twas a terrible creature, covered wi’ red hair and fearsome horns, and chewin’ something, wi’ the blood all dripping from its mouth.” He held up a hand, stemming my horrified exclamation.

“The constable they sent to see cam’ back and said, weel, bar the drippin’ blood, ’twas a verra accurate description”--he paused for effect--“of a nice Highland cow, chewin’ her cud in the bracken."

Highland cattle are, of course, native to Scotland. According to Wikipedia,


Their hair provides protection during the cold winters and their skill in browsing for food enables them to survive in steep mountain areas. They both graze and browse and eat plants which many other cattle avoid. The meat tends to be leaner than most beef because Highlands get most of their insulation from their thick shaggy hair rather than subcutaneous fat. The coat makes them a good breed for cold northern climates and they are able to thrive in outdoor conditions that would defeat most other breeds of domestic beef cattle. As such, Highland cattle are able to produce beef at a reasonable gross margin from inhospitable land that would otherwise normally be incapable of rendering a profit agriculturally.

I bought a little plush "Hieland coo", like the one shown here, in the Edinburgh airport on the way home from Scotland last July.  I think she's pretty cute! <g> (You can see more about my trip to Scotland here.)

5) One of the most famous objects associated with Scottish Highlanders in the 18th century is the basket-hilted broadsword.  You may remember the swordmaker John Simpson and his son, whom we met in DRAGONFLY IN AMBER:


At one side of the Gallery, I caught sight of two stocky figures, almost identical in uncomfortable and unaccustomed formal dress. It was John Simpson, Master of the Swordmakers Guild of Glasgow, and his son, also John Simpson. Arrived earlier in the week to present His Highness with one of the magnificent basket-hilted broadswords for which they were famed throughout Scotland, the two artisans had plainly been invited tonight to show Don Francisco the depth of support that the Stuarts enjoyed.

The Simpsons were real historical figures.  The photo above shows a sword made by John Simpson the Younger, who died in 1749.

Check out this video showing what the broadsword can do. No question, it's a formidable weapon!  (I got to hold one once, at the Grandfather Mountain Highland Games in 2010.  That was fun. <g>)

***PLEASE NOTE***  There will NOT be a Friday Fun Facts post next week, as I will be traveling to Virginia on April 12th to attend Diana Gabaldon's book-signing.  The FFFs will resume on April 19.
all things scottish arisaid basket-hilted broadsword bracken diana gabaldon friday fun facts highland cow jacobites tartan day white rose

Loved the fff today. I'm very jealous(and not ashamed to say it) that you will be seeing herself next week. I'm still on the waiting list with not much hope(as of last week over two hundred in front of me). But I might just drive up on the off chance some don't show up?

Hi Karen, Great FFF! I am curious...was the broadsword very heavy? It looks like it is when those burly men swing it!

Great FFF! Was the broadsword you held very heavy? Looks like it is from the video.

Dear Karen, love your today's FFF, such a good job, thankyou. Wish you a good trip to Virginia next week ! that'll be great to meet Diana... Please, convey our love to her, thanks (we'll be looking fwd to reading about yr time over there !).A good w.e. to you.

You've had some great FFFs and I think this is one of the better ones. You have great graphics for all five of them!

Thanks, everybody! And no, the broadsword wasn't all that heavy. But I only got to hold it for a short time.