1) Diana Gabaldon has said that the Devil's Tramping Ground in rural Chatham County, North Carolina, was the inspiration for the barren spot inside the rhododendron hell that Roger discovered in DRUMS OF AUTUMN.


His head and shoulders protruded into a clear space. Not merely clear, but empty. Eagerly, he wriggled forward, out of the claustrophobic grip of the rhododendrons.

He was standing in an open space, facing a cliff wall that rose on the far side of a small clearing. It really was a clearing, too; nothing at all grew in the soft dirt beneath his feet. Astonished, he turned slowly round, gulping great lungfuls of cold, sharp air.

“My God in heaven,” he said softly, aloud. The clearing was roughly oval in shape, ringed by standing stones, with one end of the oval closed by the cliff face. The stones were evenly spaced around the ring, a few of them fallen, a couple more dislodged from their places by the press of roots and stems behind them. He could see the dense black mass of the rhododendrons, showing between and above the stones--but not one plant grew within the perimeter of the ring. Here's another view. (Photo credit: opus2008, on Flickr.) According to this site,


The Devil's Tramping Ground is a mysterious, perfectly round and absolutely barren circle about forty feet in diameter in the pine woods of Chatham County. Not a tree, not flower, no lowly weed or even a single blade of grass will grow in the limits of the circle. Seed sowed there refuse to sprout. Any vegetation transplanted there will wither and die.

And, what's even more strange, any object left in the circle at dusk will have been violently moved outside its bounds by dawn.


He'd been out by the barn, shoveling well-rotted manure into a wheelbarrow to spread on the kailyard, Jem assisting with his own small spade.

“Sixteen tons and what do you get?” Roger had sung--if the sort of hoarse croaking he produced could be called that.

“Another day older and deeper in shit!” Jem bellowed, doing his best to pitch his voice down into Tennessee Ernie Ford range, but then losing control in a glissando of giggles.

You can see the song lyrics here.  I can easily imagine Roger and Jem listening to this record together, perhaps in their time in Boston or at Lallybroch.

3) Gorse is the common name for a genus of flowering plants found throughout the UK.  This photo shows some gorse bushes at Culloden.  (Photo credit: Danie van der Merwe, on Flickr.)

Considering that gorse bushes are full of spines, it wouldn't be a very comfortable spot to get tossed into, but Claire was in no position to be picky about it!


Suddenly reining up next to a large gorse bush, Jamie grabbed me round the waist and unceremoniously dumped me into it.

The rock surfaces were cratered with shadow; I could hear shouts and occasional musket shots, but couldn’t tell if the movements I saw were those of men, or only the shades of the stunted oaks that sprouted from cracks in the rock.

I extricated myself from the bush with some difficulty, picking bits of prickly gorse from my skirt and hair. I licked a scratch on my hand, wondering what on earth I was to do now.

Look here for more information about gorse.  I was surprised to learn that it is considered an invasive species on the West Coast of the US.

4) Seasickness is a form of kinetosis, or motion sickness.  According to Wikipedia, this is


a condition in which a disagreement exists between visually perceived movement and the vestibular system's sense of movement. Depending on the cause, it can also be referred to as seasickness, car sickness, simulation sickness or airsickness.

The vestibular system, which is part of the inner ear, monitors movement and helps control balance. In other words, the inner ear tells your brain that you're moving, but your eyes tell you that you're not (or vice versa).

Poor Jamie!  I always feel so sorry for him whenever he gets on a boat.


Jamie was lying on his side, wedged into one of these [berths] like a snail into its shell; one of which beasts he strongly resembled at the moment, being a pale and viscid gray in color, with streaks of green and yellow that contrasted nastily with his red hair. He opened one eye when he heard me come in, regarded me dimly for a moment, and closed it again.

"Not so good, hm?” I said sympathetically.

The eye opened again, and he seemed to be preparing to say something. He opened his mouth, changed his mind, and closed it again.

I tentatively smoothed his hair, but he seemed too sunk in misery to notice.

“Captain Raines says it will likely be calmer by tomorrow,” I offered. The sea wasn’t terribly rough as it was, but there was a noticeable rise and fall.

“It doesna matter,” he said, not opening his eyes. “I shall be dead by then--or at least I hope so.”

“Afraid not,” I said, shaking my head. “Nobody dies of seasickness; though I must say it seems a wonder that they don’t, looking at you."

Here are some tips for avoiding seasickness on a cruise (or a transatlantic voyage by sailing ship, as the case may be....)  I was particularly struck by item number 2 on this list:


STAY ON DECK.  When you’re feeling drowsy and nauseous, the first thing you feel like doing is going back to your room and laying down; however, this is the worst possible thing you could do. Stay on deck as much as possible to allow your eyes to confirm the movement that your body is feeling, this way your body can expect the movements before they occur and allow you to better prepare yourself.

Apparently Claire didn't know about that.  Too bad.  It might have eased Jamie's suffering somewhat.

5) Here's an example of an Iroquois cradleboard, circa 1800-1830, from the collection of the McCord Museum in Quebec, Canada.


She had been going to the forest with some other girls, one day in late summer. They carried baskets for gathering; Wakyo’teyehsnonhsa had an ax through her belt. One of the other girls had asked her whether she meant to find wood for another bowl like the one she had made for her mother; Works With Her Hands had said--with a quick, warm look toward Ian, who lounged nearby with the other young men--that no, she wished to find a good red cedar, for wood to make a cradleboard.

The girls had giggled and embraced Wakyo’teyehsnonhsa; the young men had grinned and prodded Ian knowingly in the ribs. And Ian had caught a glimpse of Sun Elk’s face, hot eyes fixed on Emily’s straight back as she walked away. 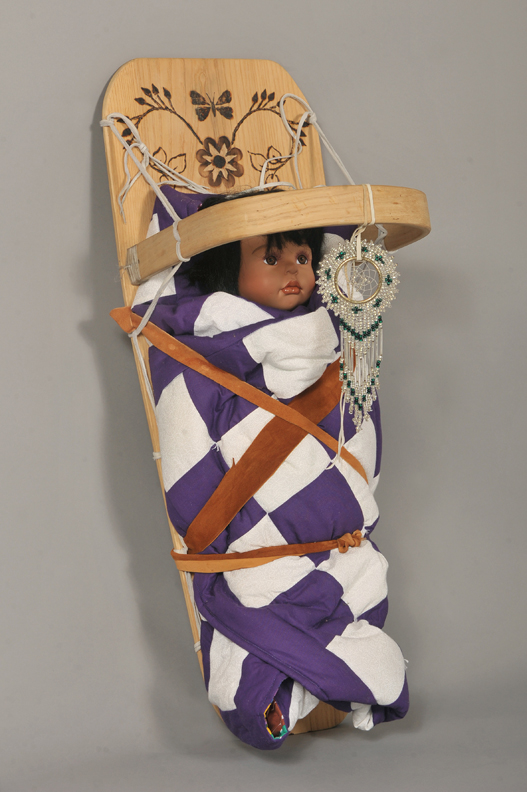 This is a modern replica of a Mohawk cradleboard, showing how the baby would be placed in it.  (Photo credit: Bill Loran)  The wooden piece in front of the baby's head is intended to protect the child if the cradleboard falls.

Dear Karen,
After just re-reading DOA, the Devil's Tramping Ground and the Mohawk cradle (where the baptized baby Alexandra was) were really interesting.

Also that Jemmy swapped the debt word to sh!t in the song.

I went to the Devil's Tramping Ground several years ago. Neat to know that it inspired Diana. :-)