1) Roger's mother's locket had garnets on it, like the ones shown above. (Photo credit: Gemological Institute of America.)  That locket may well have saved his life, on his first attempt to go through the stones.


He rubbed violently at his chest, trying to ease the irritation, and felt the small round weight of his mother’s locket, taken for luck and for its garnets. He had his doubts about Geillis’s speculations--he wasn’t about to try blood, though Fiona seemed to be supplying fire--but after all, the gems could do no harm, and if they helped...Christ, would Fiona not hurry? He twisted and strained inside his clothes, trying to get out of not only his clothing but his skin.

Garnets come in a variety of different colors.  According to this site,


Red garnet is one of the most common and widespread of gems, found in metamorphic rocks (which are rocks altered by heat and pressure) on every continent. But not all garnets are as abundant as the red ones. A green garnet, tsavorite, also occurs in metamorphic rocks, but it’s rarer because it needs unusual rock chemistries and special conditions to form.

Here are some interesting facts about garnets.  Garnet happens to be the birthstone for people born in January, including Diana Gabaldon, whose birthday is January 11.


Brianna felt a sudden prickle at the roots of her hair that had nothing to do with singer or crowd, but with the song itself.

“When Charlie looked the letter upon,
He drew his sword the scabbard from,
Come, follow me, my merry men
And we’ll meet Johnnie Cope in the morning!”

"No,” she whispered, her fingers cold on the smooth brown envelope. Come follow me, my merry men...They’d been there--both her parents. It was her father who had charged the field at Preston, his broadsword and his targe in his hands.

"Hey Johnnie Cope" was written in 1745 by Adam Skirving, and many different versions have been recorded over the years.  Here's Alex Beaton's version, which I like very much.

3) The illustration above shows where the right subclavian artery is located.  Named for their location near the clavicle (collarbone), the subclavian arteries carry blood to the arms.


"Is this all your blood?” I asked, puzzled, lifting the discarded shirt.

“You know quite well what I mean,” I said severely.

“Aye, it’s mine.” He drained his cup and reached for the bottle.

“But from such a small… oh, dear God.” I felt slightly faint. I could see the tender blue line of his subclavian vein, passing just under the collarbone and running directly above the clotted gape of the wound.

“Aye, I was surprised,” he said casually, cradling the delicate china in both big hands. “When he jerked the blade out, the blood sprayed out like a fountain and soaked us both. I’ve never seen it do like that before.”

“You have probably not had anyone nick your subclavian artery before,” I said, with what attempt at calm I could muster. 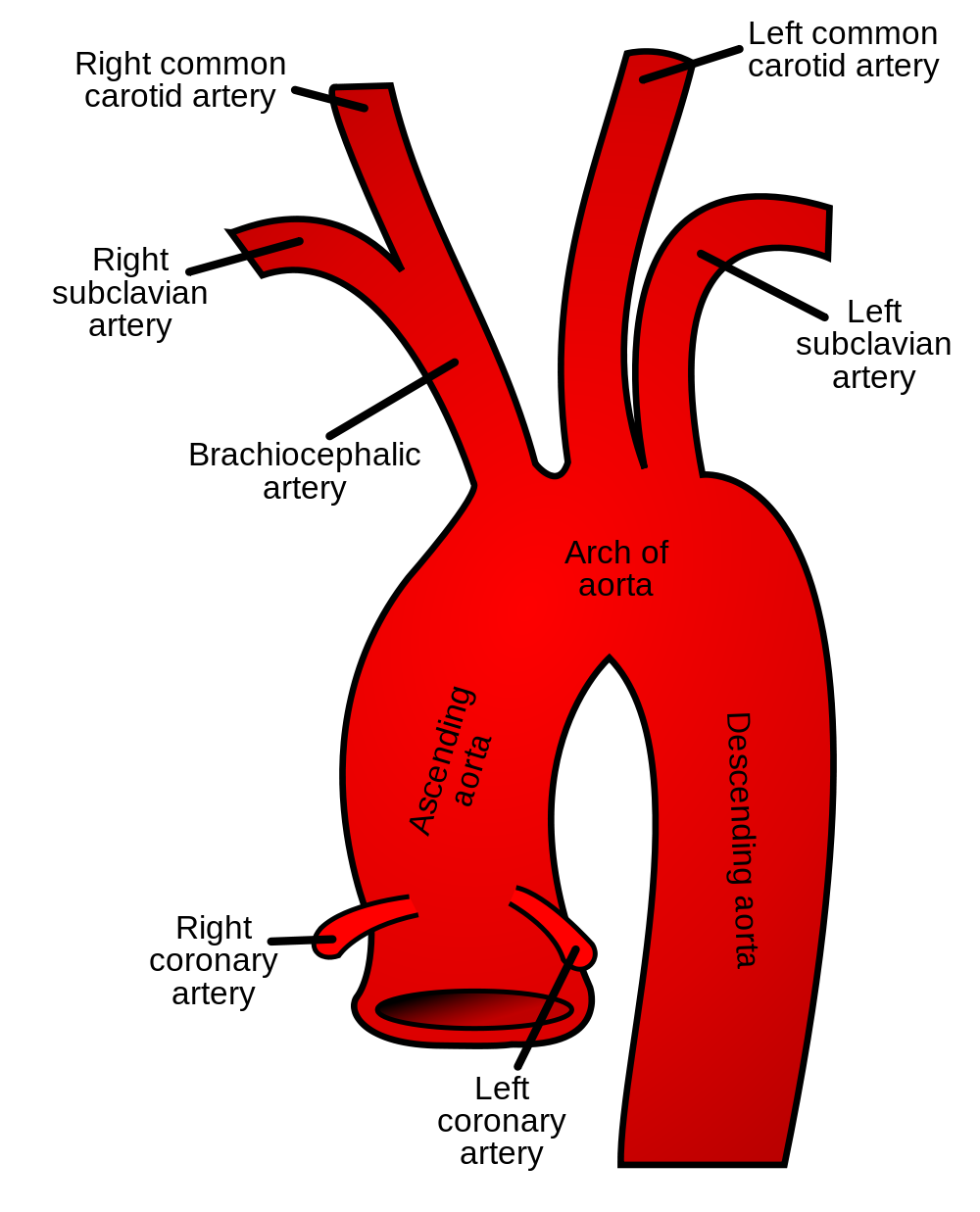 This is a close-up view, showing where the right subclavian artery comes out of the arch of the aorta.  No wonder Claire was unnerved by Jamie's injury!

For a non-technical explanation of what the subclavian artery does, look here. 4) Remember the statue of Perseus and the head of Medusa at River Run, which Claire first noticed in THE FIERY CROSS?


Examining the statue myself, I discovered that it was not an anonymous Greek after all, but rather Perseus. From this new angle, I could see that what I had assumed to be a rock resting beside the shield was in fact the severed head of a Gorgon, half its snakes standing on end in shocked dismay.

The evident artistry of these reptiles was affording an excuse for close examination of the statue by a number of ladies, who were brazening it out, pursing their lips knowingly and making sounds of admiration about the sculptor’s skillfulness in rendering every scale, just so. Every so often one would allow her eyes to dart upward for a split second, before jerking her gaze back to the Gorgon, cheeks reddened--by the morning air and the mulled wine being served, no doubt.

The photo above shows Antonio Canova's statue of Perseus with the head of Medusa, at the Metropolitan Museum of Art in New York. (Photo credit: Matt Beebe, on Flickr.)  Another version of this statue is located at the Vatican.

Here's a close-up view, from Wikipedia. If you click on the photo to enlarge it, you'll see that the snakes are amazingly detailed.  But be careful! Looking at the head of Medusa might turn you to stone. <g>


From the Hesperides [Perseus] received a knapsack (kibisis) to safely contain Medusa's head. Zeus gave him an adamantine sword and Hades' helm of darkness to hide. Hermes lent Perseus winged sandals to fly, while Athena gave him a polished shield. Perseus then proceeded to the Gorgons' cave. In the cave he came upon the sleeping Medusa. By viewing Medusa's reflection in his polished shield, he safely approached and cut off her head.

You can see another version of the story of Perseus and Medusa here.

5) This photo, from Britannica.com, shows the courtship coloration of a male mandrill (scientific name, Mandrillus sphinx).  Mandrills are the largest species of monkey, and certainly the most colorful!


"What’s the strangest thing you’ve ever seen? An animal, I mean. A non-human animal,” I added, thinking of Dr. Fentiman’s ghastly collection of pickled deformities and “natural curiosities.”

“Strange by itself? Not deformed, I mean, but as God meant it to be?” He squinted into the sea, thinking, then grinned. “The mandrill in Louis of France’s zoo."

Here's a short video from the BBC's "Planet Wild" about mandrills.

For more about mandrills, look here and here.

I hope you enjoyed these Friday Fun Facts! Look here to see all of my Friday Fun Facts blog posts, and please come back next week for more.
an echo in the bone diana gabaldon friday fun facts garnets hey johnnie cope mandrill outlander perseus and medusa subclavian artery

Your video isn't showing up. FYI. I enjoy your FFF greatly!

I'm glad you're enjoying the FFF!

I just checked and both of the videos work fine for me. If they won't play when embedded in the blog post, you can try clicking the links below to go directly to YouTube.