I love the scene in DRUMS OF AUTUMN where Jamie and Ian learn the difference between a polecat and a skunk:


"Ian,” I said, taking refuge behind Jamie. “Call off your dog. Skunks are dangerous.”

“They are?” Jamie turned a look of puzzlement on me. “But what--”

“Polecats only stink,” I explained. “Skunks--Ian, no! Let it alone, and come inside!” Ian, curious, had reached out and prodded the skunk with his poker. The skunk, offended at this unwarranted intimacy, stamped its feet and elevated its tail.


In the British Isles, the polecat historically has had a negative reputation. References to the polecat in early English literature are often vilifying, usually being synonymous with prostitutes and generally immoral people, as is the case in Shakespeare's The Merry Wives of Windsor: "Out of my door, you witch, you hag, you baggage, you polecat, you runyon!" In some rural areas, the belief persists that the polecat chews off the ears of sleeping sheep and can paralyse or kill men by jumping on them from behind and biting their necks.

For more about polecats, look here and here. 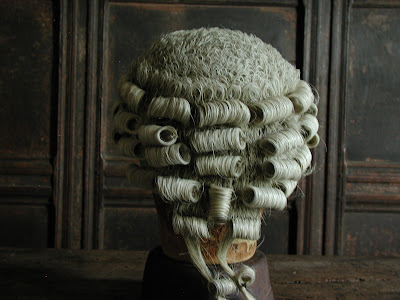 
MacDonald’s red coat was spread over the back of a chair to dry, steaming in the heat. His wig, damp and disheveled from Rollo’s attack, hung on the cloak peg above it. I got up hastily and possessed myself of the wig, receiving a look of puzzlement from the Major, and one of green-eyed hostility from Adso, who plainly considered it low of me to hog this desirable prey for myself.

“Er...I’ll just...um...put it somewhere safe, shall I?” Clutching the damp mass of horsehair to my bosom, I sidled outside and round to the pantry, where I tucked the wig safely away behind the cheese with the phosphorus.

Why did men in the 18th century wear wigs?  According to this site, the custom dates to 1655:


Louis XIV was only 17 when his mop started thinning. Worried that baldness would hurt his reputation, Louis hired 48 wigmakers to save his image. Five years later, the King of England--Louis’s cousin, Charles II--did the same thing when his hair started to gray (both men likely had syphilis). Courtiers and other aristocrats immediately copied the two kings. They sported wigs, and the style trickled down to the upper-middle class. Europe’s newest fad was born.

This illustration from Denis Diderot's Encyclopédie (published in the 1750s) shows a number of different styles of men's wigs.

For more examples, see this page from the Colonial Williamsburg site. 3) This is Tryon Palace in New Bern, NC. (Photos by Marcus Orr, on Flickr.)


They’d finished the place, and very nicely, too. William Tryon, the previous governor, had built the Governor’s Palace, but had been sent to New York before construction had been finished. Now the enormous brick edifice with its graceful spreading wings was complete, even to the lawns and ivy beds that lined the drive, though the stately trees that would eventually surround it were mere saplings. The carriage pulled up on the drive, but we did not--of course--enter by the imposing front entrance, but rather scuttled round the back and down the stairs to the servants’ quarters in the basement.

Built in the late 1760s for then-Governor William Tryon, the palace served as the official residence for North Carolina's governors.  According to Wikipedia:


In May 1775, when the American Revolution began, Governor Josiah Martin fled the mansion. Patriots seized the Palace and converted it into the State capitol building. The first general assemblies were held there and many of the furnishings were auctioned by the newly-formed state government....After Raleigh was founded as the capitol in 1794, the Palace was used for many different purposes, including a school, boarding house, and a Masonic lodge. A cellar fire started in 1798, consuming the Palace proper. Only the Kitchen and Stable Offices were saved.

Tryon Palace was completely restored in the 1950's.  I've never been there myself, although I've been meaning to visit for some time. Have any of you been there?

4) Have you ever wondered exactly what a hogshead is? The photo above shows some hogshead barrels in Joppatowne, Maryland, which was a major colonial seaport.  (Photo credit: Josh Rubin)

According to this site, a hogshead was a standard unit of measurement, equivalent to 64 gallons of liquid.  A tobacco hogshead was even larger.  From Wikipedia:

This illustration from Jamestown, Virginia, shows the size of a hogshead of tobacco.


Sitting down on a keg of tar, I leaned back against a big hogshead of tobacco, yawning and wondering idly why it was called that. It did not appear to be shaped like a hog’s head, certainly not like the head of any hog I knew.

So where did they get the name "hogshead"?  This article offers one explanation:


Most sources agree that the word hogshead dates to the Late Middle English period (1350–1469). Reasons behind the construction of the word remain less clear. One common theory focuses on the shape of the barrel, which resembles a hog’s snout. Another theory revolves around the word’s development and progression through different languages. Names for casks in several Teutonic, or Germanic, languages include oxhooft, oxehoved, and oxhufvod. It is, therefore, possible that the word originated as “oxhead.” The current word might have come from mispronunciations of the original. 5) This photo, from Wikipedia, shows a child rolling her tongue.  Until I read THE FIERY CROSS, I had no idea that some people can do this.  (Everyone in my family is flat-tongued. <g>)


[Jamie] stuck out a rolled tongue and wiggled it, demonstrating, then pulled it back. “Everyone can do that, surely? Ian?”

“Oh, aye, of course.” Ian obligingly demonstrated. “Anyone can.”

“I can’t,” said Brianna. Jamie stared at her, taken aback.

“Bleah.” She stuck out a flat tongue and waggled it from side to side. “I can’t.”

“Of course ye can.” Jamie frowned. “Here, it’s simple, lass--anyone can do it!” He stuck out his own tongue again, rolling and unrolling it like a paternal anteater, anxiously encouraging its offspring toward an appetizing mass of insects.


We must conclude that most of the variance in these traits arises from the specific environmental influences and chances that affect the individual.

You can read the full article here.  (It's worth noting that Claire is not a geneticist, and her medical knowledge is limited to what was known in 1968, so she wouldn't have seen that particular study in any case.)

What about the rest of you?  Can you roll your tongue, or are you like Bree and Roger and me, unable to do it?

Wigs like those are still worn today in courts in the United Kingdom and some Commonwealth countries. All because of a King's vanity a few centuries ago!

As many times as I've read Drums, I had no idea that a Polecat was basically a ferret! Love this site Karen. :) Ya learn something new every week. ;)

Love these Fun Facts, as always. I'm a fellow Tar Heel and have walked the grounds at Tryon Palace. I was in New Bern for work and didn't have time to go in. Maybe another time.

Yes, I can roll my tongue, and wiggle my ears as well - though I don't know if that's a genetic trait or not.
I love your Friday Fun Facts!

Yes, I can roll my tongue (like Jamie!) Another terrific post, Karen! I always look forward to your Friday Fun Facts!

Love your Friday Fun Facts! The polecat looks just like a ferret, doesn't it?

I can roll my tongue, as can my father and (I believe) both of my sisters. My mother can't make the "taco tongue," as we called it, not could everyone in her family.
.
I will say I thought that was not the best way to indicate possible paternity for Jemmie, though. Based mostly on his age, as I am fairly sure my nephews couldn't do it at that age.

I can roll my tongue and laughed at that particular moment at the conversation between Jaime, Brianna, Ian and all.

Yes, I have been to Tryon Palace. Took the family on a whirlwind trip around NC a few years ago. I only planned one day in New Bern and would have liked to stay longer.

I can NOT roll my tongue, although my dad, 2 brothers, husband and 2 sons CAN. My mom can't either.