8/07/2013 07:41:00 AM
Some people were talking about quaichs yesterday on Compuserve.  A quaich is a two-handed drinking bowl, used in Scotland for centuries.


"We are honored by your offer of friendship and goodwill,” said Colum clearly. “We accept your obedience and hold you in good faith as an ally of the clan MacKenzie.”

There was a lessening of the tension over the hall, and almost an audible sigh of relief in the gallery as Colum drank from the quaich and offered it to Jamie. The young man accepted it with a smile. Instead of the customary ceremonial sip, however, he carefully raised the nearly full vessel, tilted it and drank. And kept on drinking. There was a gasp of mingled respect and amusement from the spectators, as the powerful throat muscles kept moving. Surely he’d have to breathe soon, I thought, but no. He drained the heavy cup to the last drop, lowered it with an explosive gasp for air, and handed it back to Colum.

“The honor is mine,” he said, a little hoarsely, “to be allied with a clan whose taste in whisky is so fine."

Quaichs come in a variety of different sizes and styles, and I thought you might like to see mine. 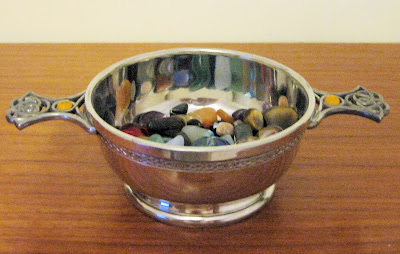 This is the quaich I bought in Inverness last summer.  (I spent a week in Scotland on the Celtic Journeys OUTLANDER Tour.  You can see my blog posts about the trip here.)  It's about four inches in diameter.  The clerk in the shop said the yellow stones in the handles are probably colored glass, but they remind me a bit of topaz, which is my birthstone.

My quaich is filled with an assortment of small colored stones.  I like to pretend it's my own small cache of gemstones, ready in case I need to time-travel on short notice. <g>  But really, I just like the way they look.

Do any of you have quaichs?
celtic journeys outlander tour diana gabaldon outlander quaich scotland