One more week to send in photos!

I've received 65 entries so far in the 2nd Annual OUTLANDER Photo Contest!  Thanks very much to everyone who's sent in photos so far.  It's going to be a great collection, and I promise you'll love it. <g>

If you're thinking about participating but you haven't yet sent in a photo, time is running out!  The deadline for entries is midnight Eastern Time on Saturday, September 7.  (One week from today!)

All you have to do is send a photo containing one or more of Diana Gabaldon's books, along with a brief description, to contest@outlandishobservations.com. Please use the subject line "OUTLANDER Photo Contest", and be sure to let me know if it's OK to share your photo online, after the contest is over.

If your photo is chosen in the random drawing, you'll win your choice of one of the following books in hardcover, signed by Diana Gabaldon:
Here are a few photos of my own that might give some of you a little inspiration. 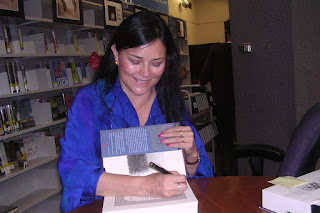 Here's Diana signing my OUTLANDISH COMPANION, at an appearance in Columbia, MD, in September, 2009.  This was the first time we met in person. 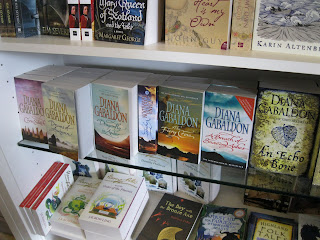 I took this photo in the gift shop at Glenfinnan Monument, in Scotland, in July, 2012.  (For more about my trip to Scotland, look here.)  I was impressed that such a relatively small shop had all seven of the OUTLANDER books on display.  Someone who works there must be a fan! <g> 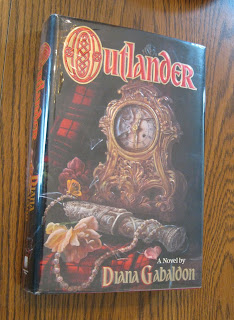 This is my OUTLANDER first edition hardcover, that I found on Amazon.com in February, 2013. 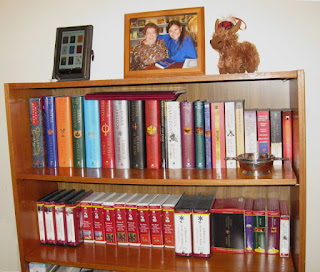 And finally, here's a photo of my OUTLANDER bookshelves that I took last year.