12/29/2013 08:16:00 AM
This has been a very exciting and eventful year for OUTLANDER fans, and for me in particular.  I've seen my Outlandish Observations Facebook page grow from just under 1000 followers at the beginning of 2013, to more than 4600 today (!)  That's just phenomenal!  Many thanks to all of you who take the time to read and comment on what I post here. I really appreciate it. <g>

Here are some of my favorite OUTLANDER moments from 2013. 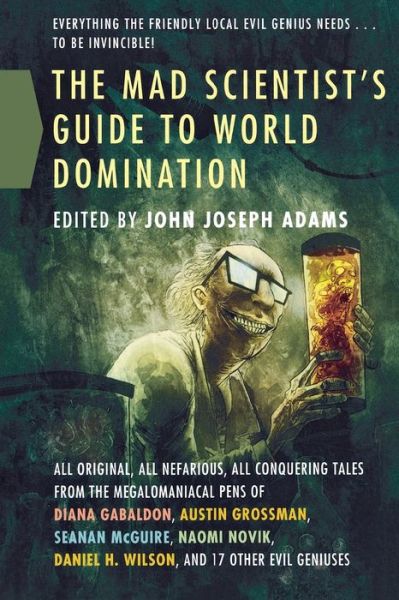 February 19: THE MAD SCIENTIST'S GUIDE TO WORLD DOMINATION (the anthology that contains Diana Gabaldon's story, "The Space Between") was published in the US.  If you haven't yet read "The Space Between", I highly recommend it!  It's a very entertaining story, with lots of potential for speculation.  See the FAQ page here for more information. 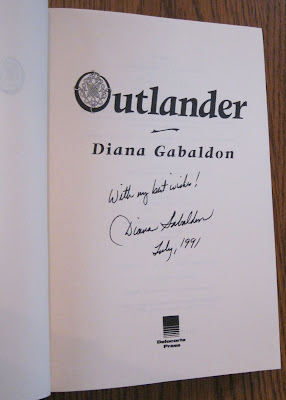 Late February: I found a first edition hardcover of OUTLANDER for sale on Amazon.com for only $220.  It's in "like new" condition, and I was thrilled to find it.  Notice the very careful, very legible signature! <g>  Diana confirmed that this was one of the very first ones she ever signed. April 5: The US cover art for Diana Gabaldon's upcoming novel, WRITTEN IN MY OWN HEART'S BLOOD (aka MOHB, MOBY, or Book 8), was officially unveiled.  I love the octothorpe design, with its interlocking infinity symbols.  For more about this cover and what it might mean, look here. April 12: I went to see Diana Gabaldon at her appearance in Annandale, VA.  The crowd was immense -- about 1200 fans -- but it was great to meet so many people in person that I'd known for a long time online.  Here I am with Carol and Tracey from My Outlander Purgatory. 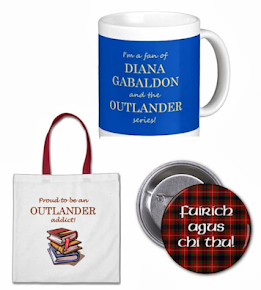 May 1: I opened my Outlandish Observations store on Zazzle.com!  Thanks so much to all of you who've purchased products from my Zazzle store. I'm really pleased with the way it turned out.

June 1: Speaking to fans at Book Expo America in New York, Diana Gabaldon made a very exciting announcement:  she's signed a contract with STARZ and Sony Pictures to make OUTLANDER into a 16-episode TV series! (And within minutes, pandemonium broke out on OUTLANDER fan-sites all over the world....)  You can see Diana's original announcement at about 1 hour 3 minutes into this video. 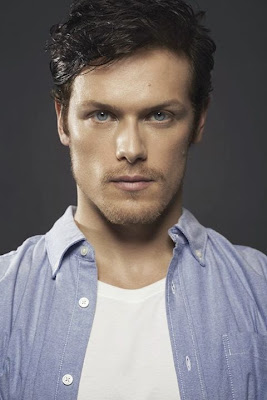 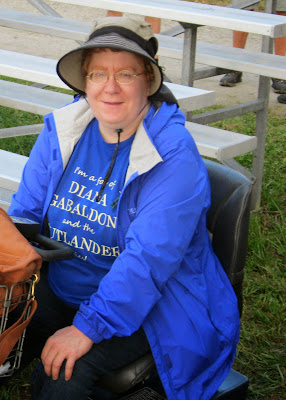 July 12: I attended the Grandfather Mountain Highland Games in Linville, NC, along with my parents. We had a wonderful time!  You can see more photos here. 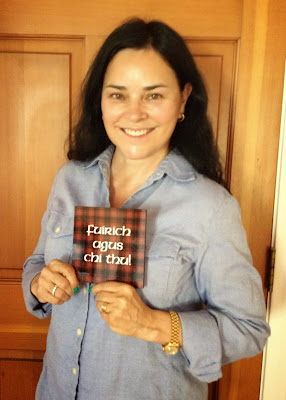 August 11: Here's Diana Gabaldon holding a wee giftie I sent her: a plaque that says "Fuirich agus chi thu!"  (That's "wait and see" in Gaelic, one of Diana's favorite phrases.)  Many thanks to Diana's husband Doug for taking the photo, and to Diana for sending it to me!

August-September: The 2nd Annual OUTLANDER Photo Contest!  This was a lot of fun, and I received photos from fans all over the world.  Thanks again to everyone who participated! You can see the slideshow of photos here.

September 11: Caitriona Balfe was cast as Claire in the OUTLANDER TV series! 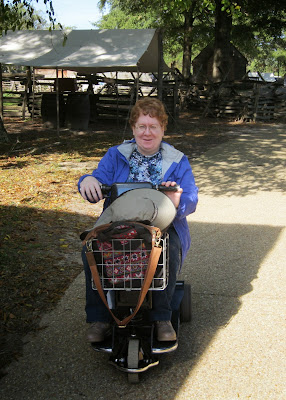 October 16-18: I had a wonderful trip to Colonial Williamsburg and the Yorktown Victory Center in Virginia.  It was a great opportunity to indulge my obsession with all things 18th-century.  <g> You can see more photos here. 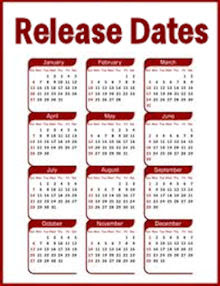 November 15: Diana Gabaldon announced that the new publication date for WRITTEN IN MY OWN HEART'S BLOOD will be June 10, 2014!  Look here for the full announcement. 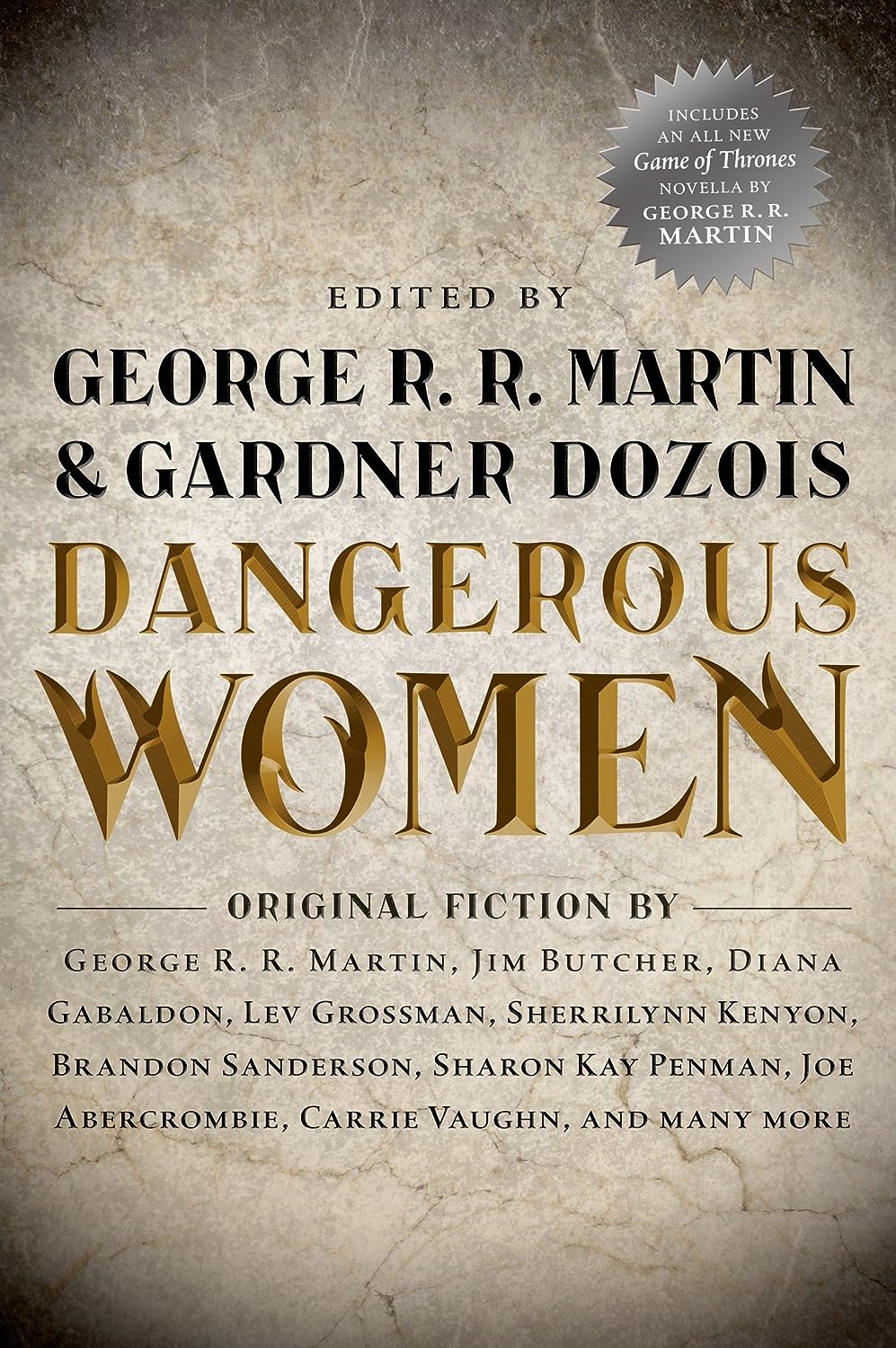 December 3: Diana Gabaldon's latest story, "Virgins", was published in the DANGEROUS WOMEN anthology, edited by George R.R. Martin and Gardner Dozois.  It's a great story, a fascinating glimpse of Jamie and Ian as young men, and I enjoyed it very much.  For more information about "Virgins", see my FAQ page here. 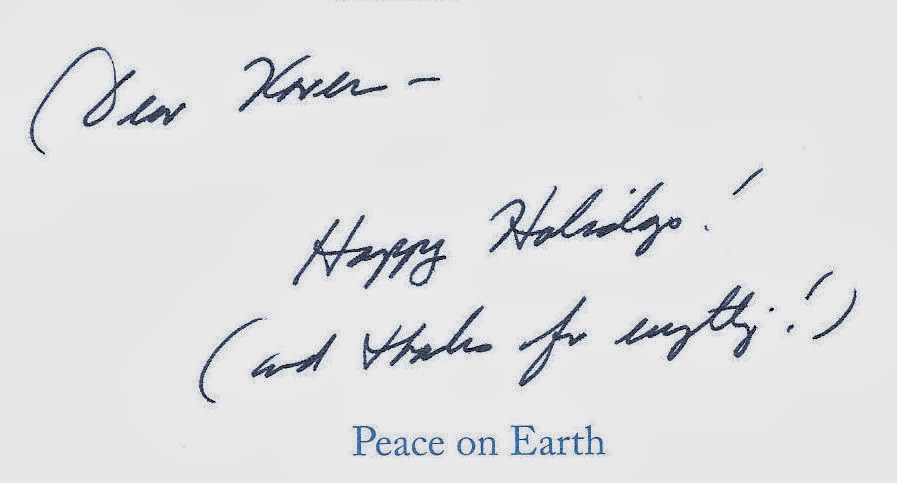 December 20: Diana sent me a lovely gift basket of dates.  The card reads, "Dear Karen, Happy Holidays! (And thanks for everything!)"

Finally, I want to take this opportunity, once again, to thank all of you who've commented on my Friday Fun Facts posts throughout the past year!  It's really gratifying to know that the effort I put into researching the FFF each week is appreciated. <g>

Wishing you all a wonderful 2014!
2013 year in review diana gabaldon outlander outlandish observations

Thank you for this site. I look forward to your fun facts!

I just found your site a month or so ago. Have enjoyed your observations and your dedication to all things Outlander.

Love your blog. Is the video the one that starts with Tom Brokaw? The page is full of videos. I don't want to waste time watching the wrong one(s).

Well done, Karen, and a very " bliadhna mhath ùr" to you! Thank you for maintaining such an INFORMATIVE site!