Here are this week's Friday Fun Facts about Diana Gabaldon's books.  This is a collection of some of my favorite items from previous FFF posts.  All of these were originally posted between April, 2012, and March, 2013.  I hope you enjoy them! 1) The gentleman shown above is wearing a banyan -- a loose dressing-gown.  Lord John Grey often wears a banyan in the evenings at home. (Portrait of Nicholas Boylston, painted by John Singleton Copley, 1767) 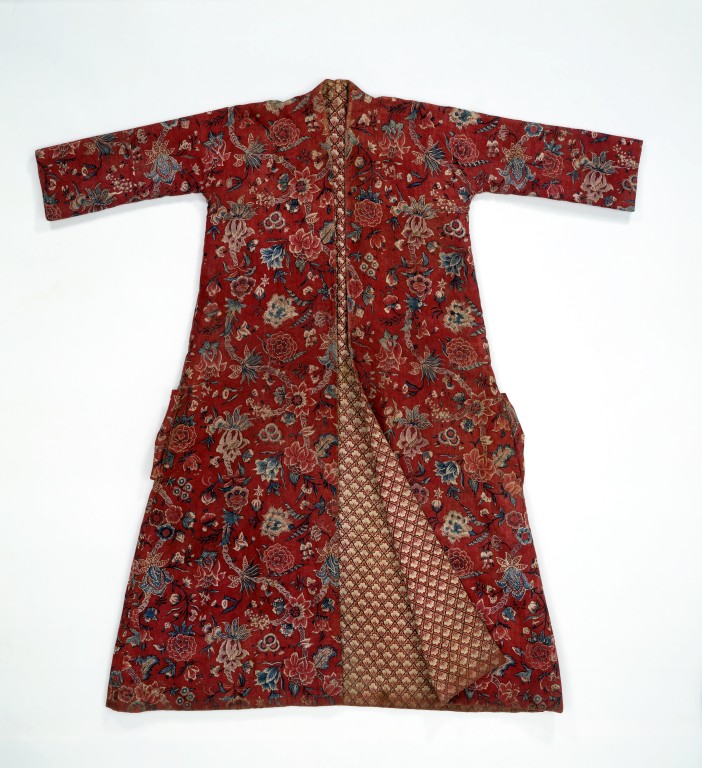 Here's another example of a banyan, circa 1750-1775, from the collection of the Victoria and Albert Museum in London.  Click on the photo for a larger view.


Having briskly stripped his master and draped him in a clean nightshirt, he went to retrieve Grey’s banyan, which had been hung to warm on the fire screen. He held this ready, peering closely at Grey in concern.

“You look like…” he said, and trailed off, shaking his head as though the prospect before him was too frightful for words. This matched Grey’s own impression of the situation, but he was too exhausted to say so, and merely nodded, turning to thrust his arms into the comforting sleeves.

Here's more about the history of banyans.  I must say, they certainly look comfortable! 2) The photos above show what a Great White Pelican (Pelecanus onocratalus) looks like.  Diana confirmed, when I asked, that this is the same kind of pelican we saw in VOYAGER.  It certainly seems to fit Ping An's description very well: 3) I had never heard the term "blue vitriol" before I read "The Space Between", and I was surprised to learn that it's an archaic term for copper (II) sulfate (CuSO4) -- a chemical that you may remember from chemistry classes in school.  Isn't that a gorgeous color? I thought the Comte's use of it in the story was fascinating.


He found the blue vitriol by smell, and wrapped the cloth tightly around the head of one torch, then--whistling under his breath--did three more, impregnated with different salts.   He loved this part.  It was so simple, and so astonishingly beautiful.

He paused for a minute to listen, but it was well past dark and the only sounds were those of the night itself--frogs chirping and bellowing in the distant marshes by the cemetery, wind stirring the leaves of spring.   A few hovels a half-mile away, only one with fire-light glowing dully from a smoke-hole in the roof.

Almost a pity there’s no one but me to see this. He took the little clay firepot from its wrappings and touched a coal to the cloth-wrapped torch. A tiny green flame flickered like a serpent’s tongue, then burst into life in a brilliant globe of ghostly color.

Here's a short video showing how you can make your own green flames using common household chemicals.

(If you haven't yet read "The Space Between", I highly recommend it!  It's available in THE MAD SCIENTIST'S GUIDE TO WORLD DOMINATION or A TRAIL OF FIRE.) 4) "Munro bagging" has been a popular pastime among Scottish hikers for decades, as Roger explained to Bree:


"If you come back to Scotland ever, I’ll take ye Munro bagging.”

He laughed, and she had a sudden memory of him, brushing back the thick black hair that he didn’t cut often enough, moss-green eyes creased half-shut by his smile. She found she was rubbing the tip of her thumb slowly across her lower lip, and stopped herself. He’d kissed her when they parted.

“A Munro is any Scottish peak more than three thousand feet. There are so many of them, it’s a sport to see how many you can climb. Folk collect them, like stamps, or matchbooks." I have always suspected that the character of Hugh Munro -- Jamie's beggar friend in OUTLANDER, who gave Claire the bit of amber with a dragonfly inside it -- was named after Sir Hugh Munro (1856–1919), the Scottish mountaineer who first compiled a list of nearly 300 Scottish peaks. (You can see a modern version of the list here.)

5) One of the many 20th-century pop culture references in the books is the Yogi Bear theme song. I am old enough to remember watching Yogi Bear cartoons on TV as a child, so the references in THE FIERY CROSS make me laugh.

For those of you who may be unfamiliar with the Yogi Bear TV series, look here.

Oh I love how you give us all this behind the scenes history. I wonder how Diana finds these facts in the first place. I can understand the modern ones but things like that blue vitriol, Oh yeah, lol she's a scientist. Fabulous post!