7/11/2015 08:27:00 PM
Thanks very much to the live-tweeting efforts of @OutlanderPod and others who shared the news from today's OUTLANDER panel discussion at SDCC (San Diego Comic Con)!

Here's the official video of the panel discussion.

Here's the Season 1 gag reel mentioned in the video.

We didn't get any new information about Season 2 casting at today's event, but we did get a few intriguing bits of news:

b) Diana Gabaldon will be writing a script for Season 2!  She mentioned on Facebook that it will be Episode 211. (I have no further details at this time, but I'll post more information as it becomes available.)


The next book probably is not the last book, but I won't know 'til I finish the one I'm writing.

So it sounds like she is not ruling out the possibility of a Book 10 (!!), but please keep in mind that Diana is still in the early stages of writing Book 9, so nothing is set in stone at this point. 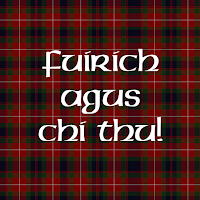 Karen, the gag reel worked fine for me and I'm outside the USA. Yea!

Ten seems like such a tidy number of books for the series. Or nine- three trios? I will just keep reading so twenty sounds fine to me!