SEVEN STONES TO STAND OR FALL 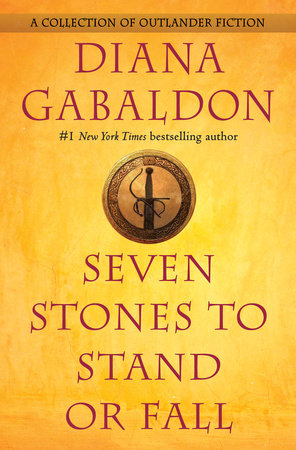 SEVEN STONES TO STAND OR FALL will be a collection of seven novellas. Some of these stories have been previously published in anthologies or as standalone e-books, but two of the stories are brand new.

The collection will include:

For more details about all of these stories, see Diana's announcement here.

SEVEN STONES TO STAND OR FALL will be available in hardcover and e-book format. You can pre-order from Amazon or Barnes & Noble.

In case you're wondering about the title, I asked Diana about it on Compuserve, and here is part of her response:

I'm looking forward to adding this book to my collection in June!

(In case you're wondering, yes, of course Diana is still working on GO TELL THE BEES THAT I AM GONE, Book 9 of the OUTLANDER series. She often says that she likes to work on multiple projects at once, because it keeps her from getting writer's block.)
diana gabaldon outlander seven stones to stand or fall story collection

Hi Karen , I just saw the photos in the Droughlander contest , love them especially the ones with shelves and bedroom they look a lot like mine , I love the ones wit the bears and plaids , very cozy , I plan on creating a special Outlander Christmas tree , this year, I hope Diana takes all the time she wants with Book 9 , meanwhile I'll be reading this collection, please post more soon. Love Your Blog, Sincerely.

Hi Karen , this sounds great and will keep me entertained until Book #9 comes out, saw the results of your photo contest and loved it , I especially loved the ones with books shelves and fans different collection , they look a lot like mine and its good to know that there are a lot of Outlander fans out there, please post more soon. Love your Blog, Sincerely.

Is there a way to buy just the new stories if we own the others already?