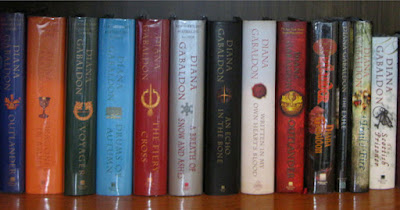 I finished listening to the audiobook of Diana Gabaldon's WRITTEN IN MY OWN HEART'S BLOOD last night, wrapping up my latest "re-listen" of the OUTLANDER series.

This is approximately my 20th time through the OUTLANDER books since November 2006.  I mostly listen to the audiobooks rather than reading print or e-book editions, because the audio versions force you to really slow down and pay attention to the details. I pick up new little details on every re-listen.  And besides, Davina Porter is a wonderful narrator! She does a terrific job with all the voices and accents.

It takes me a long time to get through the whole series, but this last re-listen took much longer than usual.  Looking through my iTunes library, I see that I started listening to OUTLANDER on August 4, 2016, so it's taken me almost exactly two years.

I took a long break from late August-November 2016 (my dad passed away in September of that year), and again in the fall of 2017 while Season 3 was in progress, but otherwise I maintained my habit of listening for 30 minutes to an hour most days.

In between the Big Books, I also listened to THE SCOTTISH PRISONER and all of the stories in SEVEN STONES TO STAND OR FALL.

That's at least 400 hours of listening, spread over two years.

I will probably take another break from the audiobooks before I start over again with OUTLANDER. I always need some time to decompress after I finish the series.

What about the rest of you?  Any other audiobook-addicts or compulsive re-readers of the OUTLANDER books out there?

In June I decided to reread Outlander because it had been awhile, at least a year. Of course I couldn't stop there, so immediately read DIA and Voyager. Finished Voyager last week and am taking a short break to read a few other books that I need to review for NetGalley, then will read DIA. Will probably read a book or two in between each of the books from here on out, just to keep my reviewing up to date! But yes, I keep them in my reading rotation! My husband just finished reading them for his first time through...next for him is The Scottish Prisoner!

Hi Karen yes I love the audio books on CD and just finished listening to "Outlander ' for the 100th time , I live them because when you can't read the entire book it audio CDS fill up the time you are missing reading and plus I love the fact you can listen to them anywhere , in the car , while cooking , or gardening , walking or on a comfortable chair when then tv is boring , The Winter season is when I mostly listen to them , and I think Davina Porter does an amazing job with the narration and so will be a fan of the Outlander books on Audio CD for a very long time . Ps , PBS has selected Outlander as one of its Great American Reads Program and am thrilled at this so have been voting for Outlander to win , I hope you can vote also , please post more soon. Happy Week. Sincerely ,

I've listened to all of the books at least twice and will probably start over again before the next book comes out. I agree with all of you; Davina Porter does a wonderful job narrating.

I listen to audio books on CD all the time--I get them from my local library. I have CD players in the kitchen, bedroom, a portable one to take to volunteer jobs, and there is a CD player in my car. I am just now finishing The Word is Murder by Anthony Horowitz. I usually listen to mysteries and thrillers--anything that I would be tempted to read the last page first! I can't really do that with the CDs.

I have read the complete series twice, and listened to every audio book (including the Lord John) last year. I just finished reading/rereading the short stories. I am now watching the series, I'm on season 2 right now, to prepare for the return of the series in November.

couldnt find them on youtube. i have read tem a few times, but would love trying to listen, thanks

Yeah, I re-read the Outlander books, and usually include Scottish Prisoner & any of the other novellas. On my last re-read I added whichever Lord John book (BOTB?) that has Percy in it since he has now shown up in MOHB.... Besides Outlander, the only books I ever re-read are Brandon Sanderson's books in the Cosmere, which is what I'm currently going back through right now. As soon as a date for BEES is announced, I'll probably take a Cosmere break and do another Outlander re-read. I too only do the audiobooks, but have a paperback of MOHB by my bed that I like to pick up and read at random places.