Hurricane quotes from the OUTLANDER books

9/12/2018 06:13:00 AM
Most of you have probably heard that Hurricane Florence is heading for the Carolinas this week, a very powerful storm that is expected to do major damage.  As those of us in the path of the storm (I live in Raleigh, NC) complete our preparations and hunker down in anticipation of Florence's arrival, I couldn't resist a few hurricane-related quotes from the OUTLANDER books.

1) This first quote comes from the final scene in VOYAGER, in which Jamie and Claire learn where they've ended up after the storm.


"Of course, you were cast away by the storm. My husband was saying last night that he’d never seen such a dreadful blow at this time of year. What a mercy it is that you were saved! But you came from the islands to the south, then?”

The south. This couldn’t be Cuba. Might we have come as far as St. Thomas, or even Florida? We exchanged a quick glance, and I squeezed Jamie’s hand. I could feel the pulse beating in his wrist.

Mrs. Olivier smiled indulgently. “You are not on an island at all. You are on the mainland; in the Colony of Georgia.”

“Georgia,” Jamie said. “America?” He sounded slightly stunned, and no wonder. We had been blown at least six hundred miles by the storm.

Imagine being carried six hundred miles by a very powerful hurricane (say a Category 4 or 5, in today's terms), in a tiny, fragile wooden sailing ship. It really is a miracle that they survived.

2) I like this bit, and I was glad to see they included it in Episode 313 ("Eye of the Storm"). To me, Jamie's last line just proves how terrified and desperate he was. And the way he says it always makes me laugh a little, even in the midst of this life-and-death situation.


A sense of lassitude and utter peace stole gradually over me. I couldn’t feel my feet or legs, and only Jamie’s crushing grip on my hands reminded me of their existence. My head went under water, and I had to remind myself to hold my breath.

The wave subsided and the wood rose slightly, bringing my nose above water. I breathed, and my vision cleared slightly. A foot away was the face of Jamie Fraser, hair plastered to his head, wet features contorted against the spray.

I smiled gently, barely hearing him. The sense of great peace was lifting me, carrying me beyond the noise and chaos. There was no more pain. Nothing mattered. Another wave washed over me, and this time I forgot to hold my breath.

The choking sensation roused me briefly, long enough to see the flash of terror in Jamie’s eyes. Then my vision went dark again.

“Damn you, Sassenach!” his voice said, from a very great distance. His voice was choked with passion. “Damn you! I swear if ye die on me, I’ll kill you!"

3) This is one of my favorite bits linking parts of the story together:


Then a bolt crashed down beside the ship, lightning and thunder together, close enough to hear the hiss of boiling water in the ringing aftermath of the thunderclap. The sharp reek of ozone flooded the air. Innes turned from the light, his tall, thin figure so sharply cut against the flash that he looked momentarily like a skeleton, black bones against the sky.

The momentary dazzle and his movement made it seem for an instant that he stood whole once more, two arms swinging, as though his missing limb had emerged from the ghost world to join him, here on the brink of eternity.

Oh, de headbone connected to de … neckbone. Joe Abernathy’s voice sang softly in memory. And de neckbone connected to de … backbone … I had a sudden hideous vision of the scattered limbs I had seen on the beach by the corpse of the Bruja, animated by the lightning, squirming and wriggling to reunite.

Another clap of thunder and I screamed, not at the sound, but at the lightning bolt of memory. A skull in my hands, with empty eyes that had once been the green of the hurricane sky.

I was on about my fifth re-read of the series before someone pointed out this connection to me: Claire, in a moment of stunned horror, realizing all at once that the skull she'd held in Joe Abernathy's office in 1968 was in fact the skull of the green-eyed Geillis -- whom Claire herself had killed in the cave at Abandawe. I think I would have screamed, too. 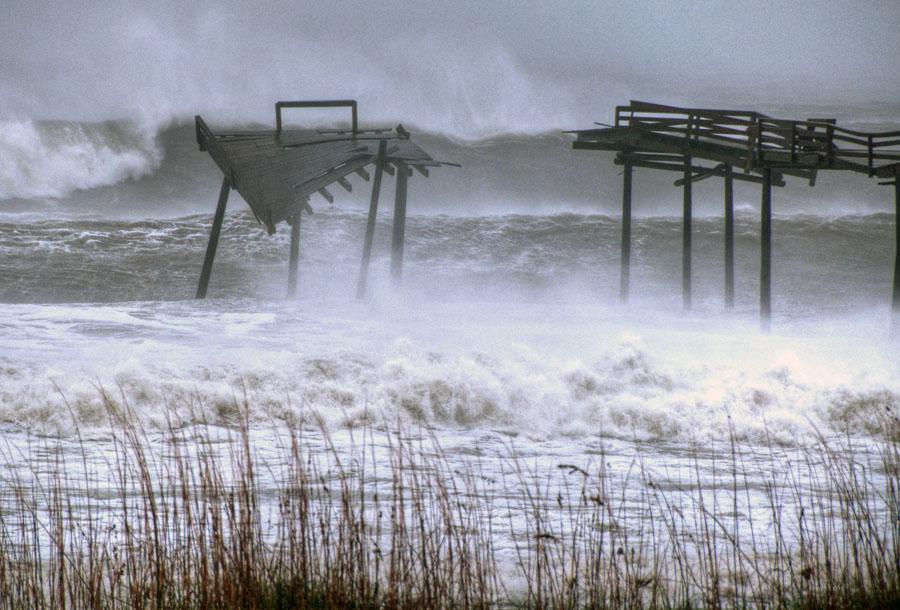 4) And here's a little taste of what it must be like on Ocracoke Island, on the Outer Banks of North Carolina, during one of these storms. (This photo from wral.com shows Cape Hatteras, near Ocracoke, during Hurricane Sandy in 2012.)


It had been raining for days, and the footing was uncertain, slippery and boggy by turns.  The wind was high, and the storm surge pounded the beaches; they could hear it, even in the secluded spot where the portal lay.

"We were all scared--maybe all but Rob--but it was way exciting, man," he said, beginning to show a glimmer of enthusiasm.  "The trees were just about layin' down flat, and the sky, it was green.  The wind was so bad, you could taste salt, all the time, because little bits of ocean were flying through the air, mixed with the rain.  We were, like, soaked through to our choners."

Hi Karen I hope you stay safe during Hurricane Florence and I lived through Superstorm Sandy and know that they are no joke and can do real damage and went with out power and lights for a week and had to cook over the fireplace and it was a real joy when everything went back to normal and so I know what Hurricanes can do , I have relatives near Willimgton and will be keeping posted with them during the storm so I hope all of you in NC stay safe . please post more soon . Happy Week. Loving Outlander.

Thank you for taking the time to put this together. I hope you are prepared for the storm and/or getting out its path.

Hope u are in a safe place. You are ahead of me I have only read the series twice and wish she would hurry get the next done.

Thank you for putting this together. I hope you are able to stay safe!!!

Thanks for doing this and I hope you are staying safe. I have family in the Smithfield and Kenly areas as well as Camp LaJeune in NC, so I am trying to keep tabs on everyone.

Hi Karen I hope you are doing ok with Hurricnane Florence and its dumping a lot of rain and flooding and power outages around the state so I hope you are safe where you are , saw Diana throw out the first ball at Yankee stadium , last night she did such a wonderful job and hope she had a lot of fun and am re-reading Drums of Autumn this month . please post more soon. Happy Weekend. Sincerely .

Thanks to all for the good wishes! We were lucky with this storm, as it didn't impact the area where I live very much. We've had a few inches of rain, but the winds were not bad, and there's no storm damage in this area.

Best wishes to everyone who's still being affected by Florence!