My trip to Yorktown and Jamestown 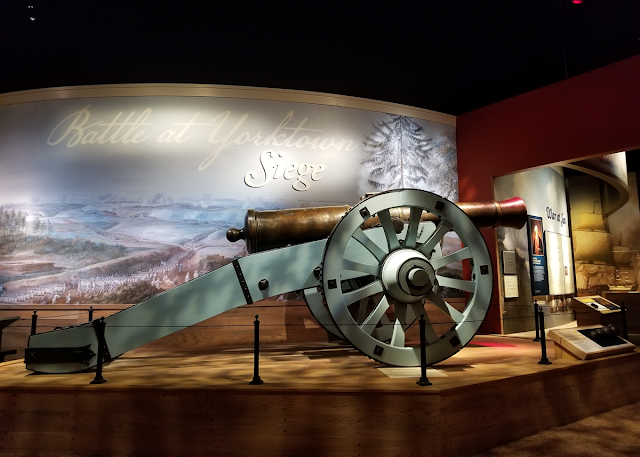 My mom and I just returned from a trip to Yorktown and Jamestown, Virginia. The weather was great the whole time, much to our relief. It felt good to be out in the sun after all that rain with Florence!

We stayed in the same hotel as on our last visit in the spring of 2017, literally across the street from a small beachfront along the York River (more about that below), and ten minutes down the road from the American Revolution Museum (formerly known as the Yorktown Victory Center).

On Thursday we spent the day touring the American Revolution Museum, which was very interesting. They had a special exhibit on 18th century artillery (cannons, mostly), which I found absolutely fascinating! 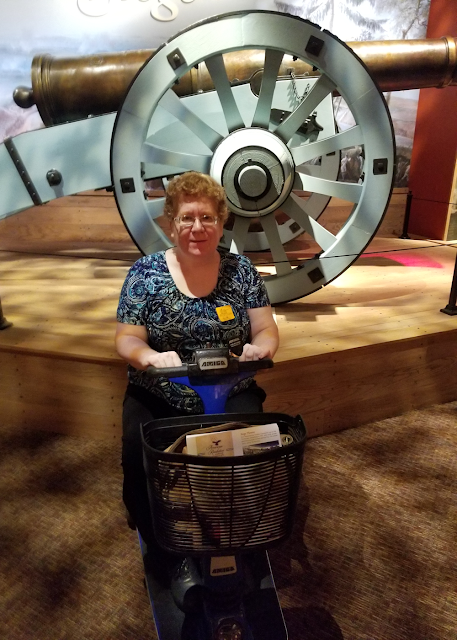 I've been interested in 18th century weaponry since I first read OUTLANDER, and this was my first chance to really get a close look at how a cannon operates and what makes it so powerful.  And now I finally understand what, exactly, Lord John and the gun crew were doing during the Battle of Crefeld in BROTHERHOOD OF THE BLADE:


"Load!” he barked, and snatched the linstock from the bombardier, motioning the soldier to replace the man who had fled. Sponger and rammer fell to their work at once, with no more than a hasty glance at Grey, blood-soaked and vicious. The erstwhile bombardier was clumsy, but willing. Grey barked them through the maneuver, once, again, forcing them, guiding them, and then felt them begin to drop back into the accustomed rhythm of the work and pick up speed, gradually losing their terror in the encompassing labor of serving the gun.

His throat was raw. The wind whipped away half his words and what was left was barely intelligible--but he saw the crew respond to the lash of his voice, and kept shouting.

Cannon were firing close at hand but he couldn’t tell whether they were friend or foe; clouds of black powder smoke rolled over them, obscuring everything.

His soaked clothes had gone cold again, and it was raining. He had taken the coil of smoking slow-match from the bombardier and tied it in its bag to his own belt. His fingers were stiff, clumsy; he had difficulty forcing the lighted fuse into the linstock, but forced himself to keep the rhythm, shouting orders in a voice that cracked like broken iron. Sponge. Vent. Load cartridge. Ram. Load wadding. Ram. Check vent. Powder. Fall back! And the hissing small flame at the end of the linstock coming down toward the touchhole, sure and graceful, with no sense at all that his own hand guided it.

That moment of suspended animation and the crash and buck of the gun. The first one left him deafened; he knew he was still shouting only because his throat hurt. 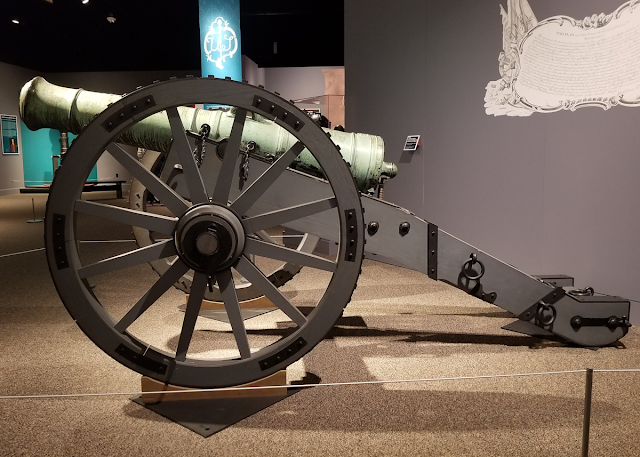 If I'm not mistaken, the cannon that exploded during that battle and seriously injured Lord John was a 24-pounder, which is a very large cannon.  According to the information I saw in the museum exhibit, a cannonball shot from a 24-pound "siege cannon" like the ones used at Yorktown during the Revolutionary War would have the same amount of energy (1.3 million joules) as a truck going 75 mph.  So whatever it smashed into, it would do a lot of damage! 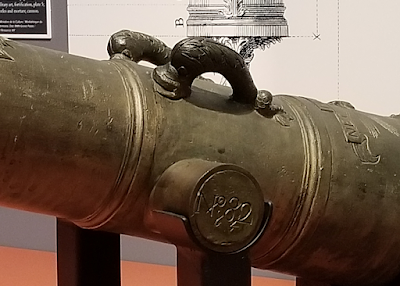 The ornately-carved handles on the large cannon shown above are called "dolphins". If you've read "Lord John and the Haunted Soldier", you may remember the piece of the dolphin that Lord John took from the remains of the destroyed cannon, part of the evidence of the cannon explosion.

The rest of the exhibits were interesting, too, but our favorite was the "immersive" theater showing a recreation of the Battle of Yorktown, complete with realistic sound effects and "cannon smoke" rising knee-deep inside the theater! (The smoke took us totally by surprise. Very effective!) 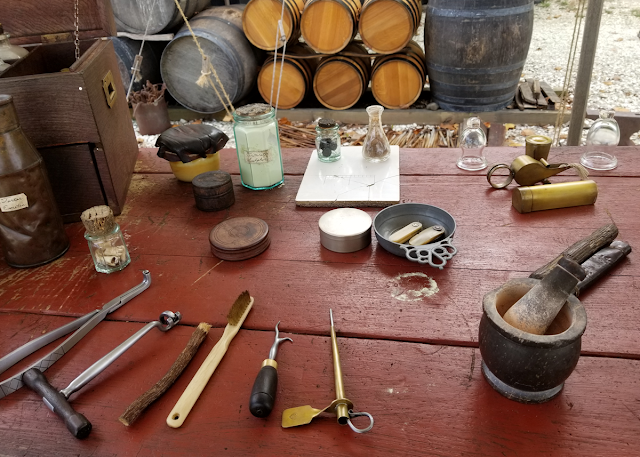 After lunch, we went to see the outdoor "living history" part of the museum: a Continental Army encampment (including a musket-firing demonstration) and a small 18th-century farming community. I had fun examining everything, from the cooking equipment to the surgeon's supplies. I asked to see the bayonet affixed to the musket the re-enactor used for the demonstration, and was disappointed to find that the blade wasn't sharp. I assume the real ones would be, though! (Lethally so, if the bayonet wound Jamie suffered at Culloden is any indication.)

The next morning (Friday) we drove to Jamestown Settlement, and spent the morning exploring the museum there. It was well done, but not as interesting as Yorktown, in my opinion. Still, I learned a few things.  Example: one reason the original colonists had such a hard time that first year was that the water sources nearby were brackish (too salty to drink), and they didn't have good access to fresh water. 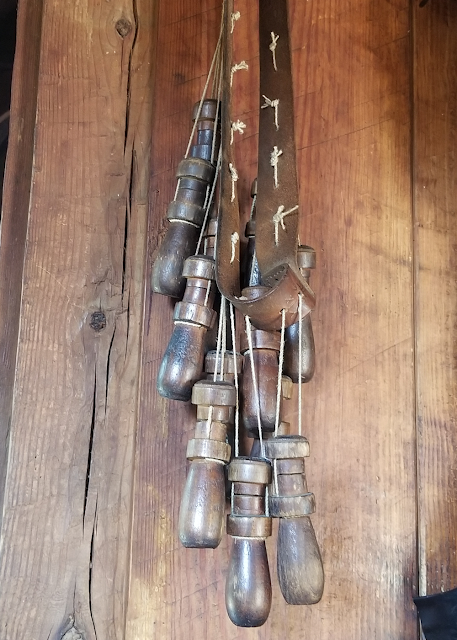 The most interesting artifact I saw at Jamestown was this 17th-century bandolier, or ammunition belt. The little bottles all have individual corks. Each of the vials would have been filled with enough powder and shot to fire a musket.

Again, there was an outdoor "living history" area, which probably would have been more interesting if I hadn't seen the one at Yorktown just the day before. Also, we didn't have a lot of time to explore the outdoor areas in detail, since we wanted to get back to the hotel in time for our boat ride at 2pm. 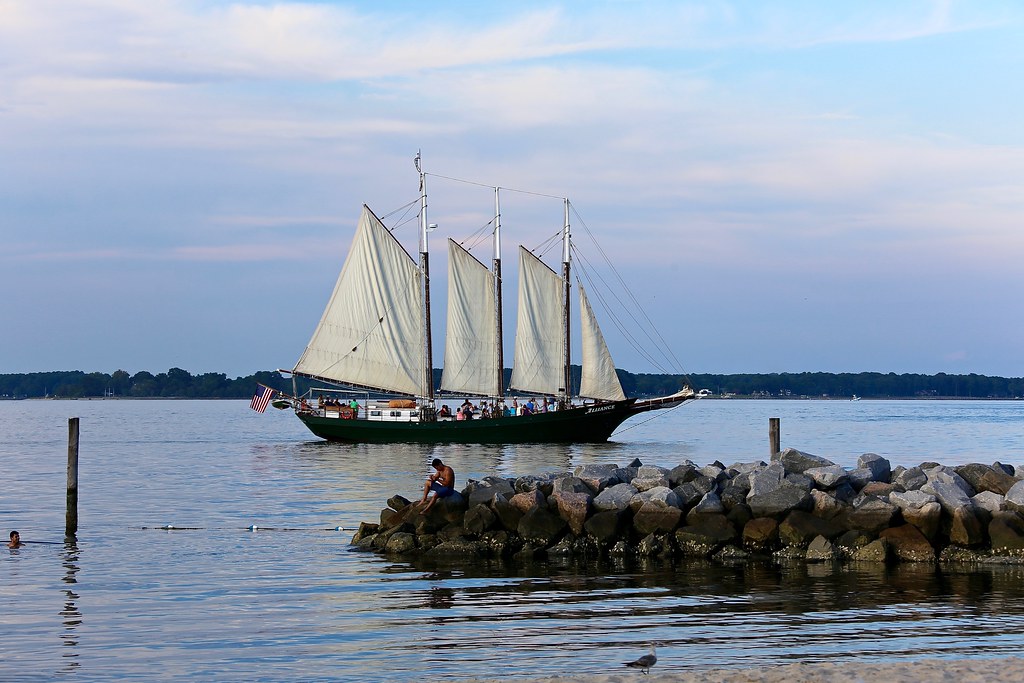 We headed back to Yorktown, arriving just in time to make our way over to the dock (literally a 5 minute walk from our hotel!) where the schooner Alliance (pictured above) was waiting. They do sightseeing cruises three times a day through November. We had seen the ship the  last time we were there, in the spring of 2017, but didn't realize it was an actual cruise until we were leaving, so this is something we really wanted to try the next time we visited.

It was worth the wait.  This was definitely the highlight of our trip! The 2-hour cruise up the York River was a lot of fun.  The Alliance is a 105-foot, 3-masted sailing ship (the tallest mast is 64 feet), built in the style of ships used during the Age of Sail in the 18th century.   It was an unforgettable experience, watching at close range as the crew (two young guys who apparently live on board the ship) raised the huge sails, and carefully adjusted the ropes as needed to turn the ship as the wind changed.  The sails are raised and lowered sort of like ENORMOUS window-blinds, fifty or sixty feet tall. <g>

It was a gorgeous day to go sailing, sunny with just enough of a breeze to fill the sails.  Very peaceful and relaxing.  There were only about 15 or 20 people on board.  I used a folding manual wheelchair to get from the hotel to the dock, and they stowed the chair on board with no problem at all.  All in all, a lovely experience that was well worth doing!

You can see more of my trip photos in my public Facebook album here. (I think the link should work even if you're not on Facebook.) Most of the photos are of things that would be of interest to anyone who enjoys the historical details in the OUTLANDER books. <g>

Hi Karen wow ! what a wonderful trip you must have felt like you were seeing part of Jamie & Claire 's world up close and felt like you were a part of it and it must have made the scenes in Outlander that more real , just in time for season 4 this Fall I will be taking a vacation in New England this Fall and will be seeing places like this too , thanks for so much for sharing , please post more soon. Happy Week. Sincerely .