OUTLANDER quotes to cool you off

7/18/2019 07:36:00 PM
Considering that many parts of the US are suffering a brutal heat wave this week, I thought it might be a good time to share a few winter pictures that remind me of the OUTLANDER books, in an attempt to help us stay cool.

If you haven't read all of the OUTLANDER books, you will find spoilers below! Read at your own risk. 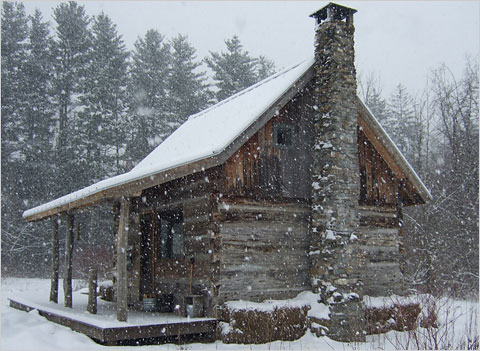 3) This picture shows a cabin built around 1820 near Grandfather Mountain, NC (very close to where Fraser's Ridge is supposed to be located).  This is very much the way I picture the original cabin on the Ridge. Just imagine trying to stay warm in a little cabin like that through the bitter winters of the 1770s, with a small child to care for:


[W]hen I got up this morning, the water in the basin was so cold I had to warm water in a pan on the fire before I washed Jemmy.

4) The photo above shows Corrimony Cairn, where General Simon Fraser of Balnain was buried. (Photo credit: Jock Watson on Trover)


It was a long walk from the farmhouse at Balnain. As it was early January in Scotland, it was also wet and cold. Very wet. And very cold. No snow--and I rather wished there had been, as it might have discouraged Hugh Fraser’s insane notion--but it had been raining for days, in that dismal way that makes hearths smoke, and even clothes that have not been outside grow damp, and drives the chill so far into your bones that you think you’ll never be warm again. 5) Icicles in Boone, NC, in the vicinity of Fraser's Ridge. (Photo credit: eightylbs, on Flickr.) Hope all of you in the US stay cool over the next few days!

P.S. to those of you in the Southern Hemisphere: No, I haven't forgotten about you! Here's my collection of OUTLANDER Quotes to Keep You Warm.
diana gabaldon heat wave outlander quotes to cool you off winter pictures

Hi Karen , thanks do much for posting this the photos of the winter scenes look very much like what we get here in NY , the weekend will be a very hot one near 100 degrees , so this will help a lot so will be doing my best to stay cool with watching a Starz season 3 marathon of season 3 , so thanks again for the fun winter quotes . please post more soon. Happy Weekend. Loving Outlander .sincerely .