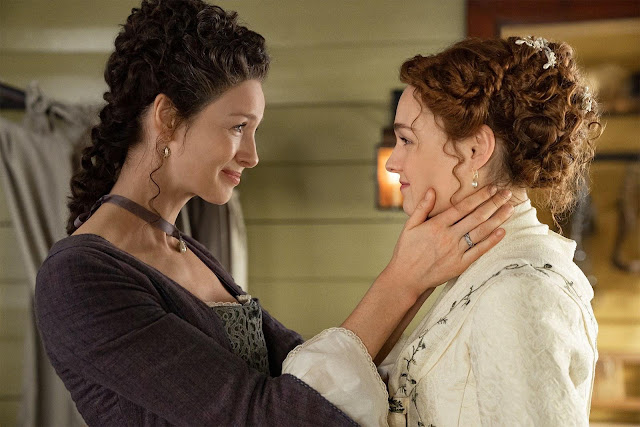 Happy Mother's Day to all the moms out there! Here are a few of my favorite quotes about motherhood from Diana Gabaldon's books. Hope you enjoy them!

1) Marsali, in an advanced state of pregnancy, and five-year-old Germain:


She leaned back a little and pushed a hand firmly into the side of her mound. Then she seized Germain's hand and put it on the spot. Even from where I stood, I could see the surge of flesh as the baby kicked vigorously in response to being poked.

Germain jerked his hand away, startled, then put it back, looking fascinated, and pushed.

"Hello!" he said loudly, putting his face close to his mother's belly. "Comment ça va in there, Monsieur L'Oeuf?"

"He's fine," his mother assured him. "Or she. But babies dinna talk right at first. Ye ken that much. Félicité doesna say anything but 'Mama' yet."

2) I like the realistic depictions of breastfeeding in these books, even though I've never had kids of my own. Here's Claire with Brianna, age three months:

"You can't be hungry again," I said to the top of her head. "I fed you not two hours ago." My breasts were beginning to leak in response to her rooting, though, and I was already sitting down and loosening the front of my gown.

"Mrs. Hinchcliffe said that a baby shouldn't be fed every time it cries," Frank observed. "They get spoilt if they aren't kept to a schedule."

It wasn't the first time I had heard Mrs. Hinchcliffe's opinions on child-rearing.

"Then she'll be spoilt, won't she?" I said coldly, not looking at him. The small pink mouth clamped down fiercely, and Brianna began to suck with mindless appetite. I was aware that Mrs. Hinchcliffe also thought breast-feeding both vulgar and insanitary. I, who had seen any number of eighteenth-century babies nursing contentedly at their mothers' breasts, didn't.

3) Jamie lost his mother at a very young age, but he hasn't forgotten her:


I had heard what he said to the plover he released. Though I had only a few words of Gaelic, I had heard the old salutation often enough to be familiar with it. “God go with ye, Mother," he had said.

A young mother, dead in childbirth. And a child left behind. I touched his arm and he looked down at me.

4) Bree's reaction on the night before Claire goes back through the stones, when she thinks she'll never see her mother again:


"It's like--there are all these things I don't even know!" she said, pacing with quick, angry steps. "Do you think I remember what I looked like, learning to walk, or what the first word I said was? No, but Mama does! And that's so stupid, because what difference does it make, it doesn't make any difference at all, but it's important, it matters because she thought it was, and ... oh, Roger, if she's gone, there won't be a soul left in the world who cares what I'm like, or thinks I'm special not because of anything, but just because I'm me! She's the only person in the world who really, really cares I was born, and if she's gone..." She stood still on the hearthrug, hands clenched at her sides, and mouth twisted with the effort to control herself, tears wet on her cheeks. Then her shoulders slumped and the tension went out of her tall figure.

"And that's just really dumb and selfish," she said, in a quietly reasonable tone. "And you don't understand, and you think I'm awful."

"No," Roger said quietly. "I think maybe not." He stood and came behind her, putting his arms around her waist, urging her to lean back against him. She resisted at first, stiff in his arms, but then yielded to the need for physical comfort and relaxed, his chin propped on her shoulder, head tilted to touch her own.


"I have noticed,” she said slowly, “that time does not really exist for mothers, with regard to their children. It does not matter greatly how old the child is--in the blink of an eye, the mother can see the child again as it was when it was born, when it learned to walk, as it was at any age--at any time, even when the child is fully grown and a parent itself.”

“Especially when they’re asleep,” I said, looking down again at the little white stone. “You can always see the baby then.”

6) Jenny, on being the mother of a two-year-old:


“Ah,” Jenny sighed contentedly, bending to inspect her appearance in the gold-framed mirror. She wet a finger and smoothed her brows, then finished doing up the buttons at her throat. “Nice to finish dressing wi’out someone clinging to your skirts or wrapped round your knees. Some days I can scarce go to the privy alone, or speak a single sentence wi’out being interrupted.”

7) Claire, in her farewell letter to Bree:


You are my baby, and always will be. You won’t know what that means until you have a child of your own, but I tell you now, anyway--you’ll always be as much a part of me as when you shared my body and I felt you move inside. Always.

I can look at you, asleep, and think of all the nights I tucked you in, coming in the dark to listen to your breathing, lay my hand on you and feel your chest rise and fall, knowing that no matter what happens, everything is right with the world because you are alive.

8) Roger's mother saved his life in the moments before she died in the Bethnal Green tube station collapse in March, 1943.


"She let go my hand,” he said. The words came more easily now; the tightness in his throat and chest was gone. “She let go my hand ... and then she picked me up. That small woman--she picked me up, and threw me over the wall. Down into the crowd of people on the platform below. I was knocked mostly out by the fall, I think--but I remember the roar as the roof went. No one on the stair survived."

9) This is one of my favorite quotes about motherhood from the whole series:


“Did I ever think to thank ye, Sassenach?" he said, his voice a little husky.

“For what?" I said, puzzled. He took my hand, and drew me gently toward him. He smelled of ale and damp wool, and very faintly of the brandied sweetness of fruitcake.

“For my bairns," he said softly. "For the children that ye bore me."

"Oh," I said. I leaned slowly forward, and rested my forehead against the solid warmth of his chest. I cupped my hands at the small of his back beneath his coat, and sighed. "It was ... my pleasure."

The last one is my favorite also!

Been reading Diana's books for over 25 years now.