Here are some of the more frequently asked questions about THE SCOTTISH PRISONER.  (Last updated March 18, 2012.) 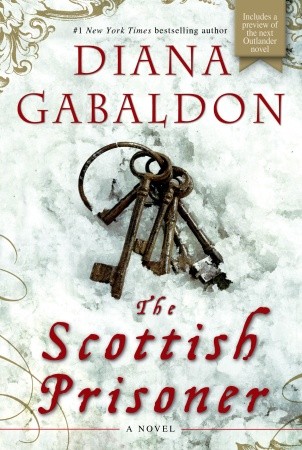 1) What is THE SCOTTISH PRISONER?

THE SCOTTISH PRISONER is Diana Gabaldon's latest novel, which she describes as a two-person book, told half from Jamie's point of view and half from Lord John's.  The story takes place in 1760, during the time when Jamie was living at Helwater (and therefore the title refers to Jamie).  THE SCOTTISH PRISONER was published in hardcover and e-book editions on November 29, 2011.

Here's a brief video where Diana explains in her own words what this book is all about.

Here's the official book trailer for THE SCOTTISH PRISONER, from Random House, Diana Gabaldon's US publisher.


3) When will it be published in paperback?

THE SCOTTISH PRISONER will be released in trade-paperback format (that's the large size) in the US and Canada on May 29, 2012. Click on the image below to go to the pre-order page on Amazon.com. 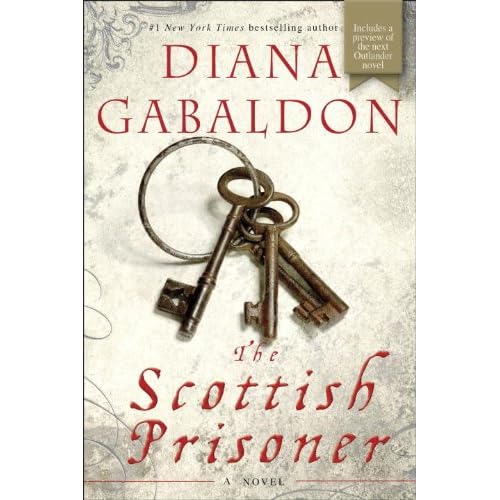 3) How can I get a signed copy of THE SCOTTISH PRISONER?

You can order autographed copies of all of Diana Gabaldon's books, including THE SCOTTISH PRISONER, from the Poisoned Pen bookstore, in Scottsdale, Arizona. This is Diana's local bookstore, and they ship all over the world. Their staff is very friendly and knowledgeable about Diana's books.

4) I thought this book was supposed to be titled LORD JOHN AND THE SCOTTISH PRISONER.  What happened?

That was Diana's working title, but she mentioned on Compuserve that it was changed to THE SCOTTISH PRISONER.  As Diana put it, "We decided that was better, as the book is half Jamie's."

5) Where can I find excerpts from THE SCOTTISH PRISONER?

Jari Backman, an OUTLANDER fan from Finland, has a list of all the SCOTTISH PRISONER excerpts on his web site, with links to the discussions on Compuserve.

6) Are there e-book editions of THE SCOTTISH PRISONER?

7) What about the audiobook?  Will Jeff Woodman be the narrator? 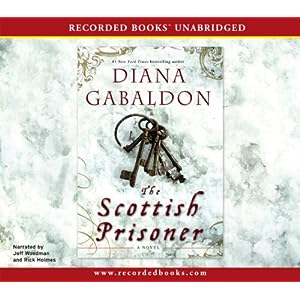 The audiobook is available for download from audible.com here.

8) Where does THE SCOTTISH PRISONER fit into the chronology of the Lord John books and stories?

THE SCOTTISH PRISONER comes after "The Custom of the Army", but before "Lord John and the Plague of Zombies".  Diana says the story takes place in 1760.  Look here for the complete list of the Lord John books and stories.

9) How many pages long is THE SCOTTISH PRISONER?

The story itself is 507 pages, not counting the Author's Notes section at the end, and the special preview of WRITTEN IN MY OWN HEART'S BLOOD (aka Book 8).  That's longer than BROTHERHOOD OF THE BLADE, though not by much. <g>

10) Where are the Gaelic audio files mentioned in the Author's Notes?

They haven't been posted yet, because Cathy MacGregor is still working on them.  Cathy posted this update on Compuserve on Feb. 22, 2012:


I have been in the wonderful position of organizing the Gaelic translations for Diana's books for a few years now.  It's great fun: I translate the REALLY simple stuff,  and I get my great friend Catherine-Ann MacPhee, who is a well-known Gaelic singer, actress, BBC tv presenter, etc. etc. etc., to do the more complex stuff . . . and I got our pal Kevin Dooley, an Irish singer and writer,  to do the Irish chunks for the latest book, The Scottish Prisoner.  I recorded them too, and that's what we'll have up on her website  as soon as we can.  You wouldn't believe how complicated it is to do the phonetic transcriptions!  I've been a learner, off and on, for over 10 years now (and I grew up hearing a smattering from my grandparents), and I still find them really difficult.  Also, the page refs from the book are different from the typescript I was working with, so that took a little work . . . and somewhere along the line I realized that Diana already had some stuff in Gaelic in there that we did not have to translate . . .so we hadn't recorded them, as we had only recorded what was on our "to-do" list. There's more, but I won't  bore you to death: my wee bit of work is richly rewarding, and  I'm looking forward to making the recordings and transcriptions available as soon as we can.