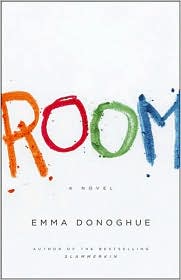 Jack is five years old, a lively, intelligent, curious little boy who lives with his mother in a place they call Room. He can count to 100, he knows how to read, and his favorite TV show is "Dora the Explorer".

At first Jack seems like a completely normal child, until you realize: he has never seen a car, or a tree, or a telephone, or a house, or a window, or a child his own age -- except on television. He has never felt the wind on his face, never jumped in a puddle of rainwater, never walked up a flight of stairs. Everything he has ever known in his entire life is right there in the eleven-foot-square confines of Room, where he and his Ma eat and sleep and bathe and play. This is Jack's reality. The world of Outside is so foreign to his experience that he doesn't even believe it actually exists.

ROOM is told entirely from five-year-old Jack's point of view. Seeing everything through his eyes, the horrific nature of their predicament is not apparent at first, but gradually the reader becomes aware of many small details that have added significance when viewed through adult eyes. There's no explicit sex and very little violence in this book, but it is still very chilling, even terrifying, in an understated sort of way.

I thoroughly enjoyed this book, and I would highly recommend it to anyone who likes the depiction of children in the OUTLANDER books. Emma Donoghue has created a very memorable character in Jack, and an unforgettable story.

If any of you have read ROOM, I would be interested to hear what you thought of it.
diana gabaldon methadone list outlander room by emma donoghue

It's next in my TBR pile!

I am just curious how you corrolate the way children are depicted in the Outlander books and the novel Room? Room is modern day.

Of course the stories take place in completely different time periods! But what I meant was, the way the children in the OUTLANDER books think and behave has always seemed very natural and believable to me -- with an undercurrent of humor (Jemmy, especially, makes me laugh in ABOSAA in almost every scene he appears in, just by the things he does and says). Jack, in ROOM, is portrayed just as realistically, in my opinion at least. (Keeping in mind that I don't have children myself.)

I'm also thinking about the chapter in ECHO titled "Firefly", which is told from Jem's point of view. The way he fights down his fear and tries to think calmly and figure out what's going on and what to do next, is very similar to the way that Jack thinks, in ROOM, when he's trying to calm himself down or make sense of what's going on around him.

I was intrigued by this book, but afraid I'd find it too depressing. Was I wrong?

I know you didn't like "Blackout" but I love Connie Willis and am thrilled that "All Clear" is coming out tomorrow! I even thanked Diana at ComicCon for introducing me to "The Doomsday Book" on her Methadone List.

Also I'd like to request that you put up one of your fun countdown calendars for "Songs of Love and Death". Thanks!

No, I didn't find ROOM depressing at all. The subject matter is serious, but the overall themes are about the relationship between the boy and his mother, the power of love, and the courage to take risks when necessary in order to protect the ones you love. Which is a pretty hopeful message, if you think about it.

You're right, I didn't care for BLACKOUT, and while I will probably skim through ALL CLEAR in the bookstore, I don't plan to buy it.

Good point about the countdown calendar for SONGS. I'll try to put something up this week!

This is so on my wish list. I have read 2 other of this author's books (Life Mask (highly recomended) and Slammerkin.