11/16/2010 06:55:00 AM
Congratulations to Diana Gabaldon on the publication of her latest story, "A Leaf on the Wind of All Hallows", in the SONGS OF LOVE AND DEATH anthology. 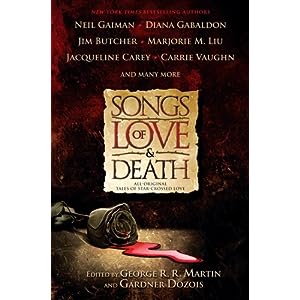 This is a wonderful story, and I would highly recommend it to OUTLANDER fans.

Feel free to post your comments and reactions to the story here.

Major spoilers below! Don't read below unless you've finished the story!

Here are a few of my reactions:

-- Jerry is a great character. I like the way he thinks. And his approach to dealing with balky machinery makes me laugh. <g>

-- I loved the scene with Marjorie and her mother and Frank. Heartbreakingly sad. It was great to get a glimpse of wee Roger, too. "He wouldn't throw a fit—he hardly ever did—but he wouldn't give up, either." (p. 450) I love the way Roger's temperament is evident here, even as a toddler.

-- Frank seems much more sympathetic in this story -- the first time we've seen him through impartial eyes, so to speak -- and I wonder if anyone's opinion of him will change as a result. "Most of them—of us—we're just…there, and we do our best. Most of the time." (p. 454) I love that line. Frank's not a hero, either, nor especially brave. But he did his best -- most of the time <g> -- after Claire came back. (IMHO, at least.)

-- It's awfully damn lucky for Jerry that he happened to be carrying a gemstone in his pocket when the plane went down!

-- The ending is a miracle. Tragic, heartbreaking, but at the same time....a miracle. (Well, there are two miracles, really. First, that Roger got the chance to say, "I love you" to his dad, and second, that Jerry was there to catch him.) And if Roger hadn't been there to send him back, Jerry wouldn't have been there in the tube station to catch him and thereby presumably save his life. (Thinking about time-travel paradoxes at this time of day just makes my head hurt <g>, but I'll be very interested in what the rest of you have to say about this.)

-- And now I really want to know two things: a) What the heck are they doing in Northumbria, and how did they get there? (Presumably it's a long way on foot or horseback from Craigh na Dun.) b) What year is it when Jerry arrives in the past?

I really enjoyed this story, and it definitely raises at least as many questions as it answers. We'll be speculating about what it all means for some time to come, I'm sure.
a leaf on the wind of all hallows diana gabaldon frank randall jerry mackenzie marjorie mackenzie reactions roger mackenzie songs of love and death anthology

songs of love and death anthology

I also loved the story and the questions it raises, but am I being completely dense and missing something when I ask who the 'fair man' with Roger was?

I just finished it and loved it! I cried at the end, I was so hoping it would be different, but it was still a great story. I have a spoiler question. Is it alright to ask?

That's William Buccleigh MacKenzie (aka "Buck"). Have you read ECHO?

Sure, go ahead and ask. There's already a spoiler warning on this message, so anyone who doesn't want to know should just skip this blog post and the comments.

I wondered why Roger sent his dad to the stones knowing he would not make it back, or so he said to Buck. It would seem he would keep Jerry with him, even it was dangerous (as it seems to have been).

Roger didn't know the role his father would play in his past, so I couldn't understand why he would not try and see if he could change his father's fate.

If the answer to this obvious, I have to plead Outlander overload. I think this it is a real condition and should be in a medical textbook somewhere.

Why do we think the 'fair' headed person with Roger is Buck? First I thought Buck was dark heided too.

It's definitely Buck. Remember, he and Roger left for Craigh na Dun together at the end of ECHO, with the intention of going back through the stones after Jem. And it seems they made it, though we don't know why they ended up in that time and place (Northumbria before 1752, rather than Craigh na Dun in the 1770s).

Buck does have fair hair. I can't remember if he's specifically described as blond or not, but he's not dark-haired, no.

I bet we'll see that question addressed in Book 8. Now I'm REALLY looking forward to Roger's storyline in that book!

Just finished. So much for my theory that Roger and Buck don't go back... ;-)

Need to read it again--I ran off to BN to read it quickly during lunch and probably missed a bunch of stuff.

Now I need to go back to the beginning of Outlander and reread the parts where Frank/Claire are meeting with the reverend--Frank DOES realize who the small boy in the room with them is, right? Or not? Hmmmm.....

karen in response to your comment to Lolly...Buck is described like this "tall fair-haired passenger, Morag MacKenzie's husband, green eyes dark and wild with fury"...page 529 Drums of Autumn.

I know I'm a bit late to the party here, but I just finished "leaf" & have some questions which I hope to get some insight or opinions on:

1. I have to agree with Jane above,Why would Roger send his father Jerry back through the stones if he doesn't think he'll make it and doesn't know his role in saving him. Why not tell him who you are (he knows he's traveled in time) and keep him with you?

3. There is a 200 year time jump and the two times run parallel, so the same amount of time passes btw the two time eras. If so, then why has two years passed for Roger and his mom after his father disappears, but only less that two weeks for his father in the 1700's? Diana explains the whole Samhain twice issue with the calendar change, but Jerry wasn't there for 2 years. WHY? Did I miss something?

Inconsistencies bug me. Any ideas? I hope they are explained in book 8!

And it seems they made it, though we don't know why they ended up in that time and place (Northumbria before 1752, rather than Craigh na Dun in the 1770s). past post

well if Roger's son is in a tunnel somewhere, and not in the past also, could that have screwed up Roger's journey.....

Anonymous - yes, that's exactly what Diana said on Compuserve -- that Roger went into the stones thinking of Jeremiah MacKenzie, but the one he was thinking of (Jemmy) was not there, so they ended up going to his "nearest genetic equivalent" (Diana's words) instead.

It will be really interesting to see how this is explained/resolved in Book 8!

I just found this site -- I'm a late comer to Outlander. I've read all the books and fascinated at everyone's attention to detail. I'm thinking I should re-read the entire series (aw, shucks!) to make sure I pick up on all the nuances....your observations are impressive! Do you keep flashcards or something like that on the characters?

I just finished this part in MOBY... and granted it may be addressed in the next couple of chapters but... I also have to ask, why does Roger send Jerry back through the stones when he is sure Jerry will not make it??? Roger is quick to manipulate time and travel in other circumstances, why not keep Jerry with him? Perplexed!