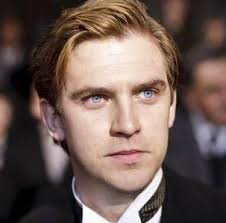 One of the characters in "Downton Abbey" is a young man named Matthew Crawley, played by Dan Stevens. IMDB says Dan Stevens was born in 1982, which makes him exactly the age that Lord John is in BOTB. He may be a little too tall for Lord John's 5'6", but otherwise I think he fits my mental image pretty well. And his voice is very much like what I think Lord John sounds like, too. If any of you have seen "Downton Abbey", I would be interested to know what you think about it. I'm really enjoying it so far!

He is certainly good looking! I can definitely see him in the earlier books.

Yep, pretty much fits my idea of John too. As long as they get the appropriately tall enough Jamie then his height shouldn't interfere. I always think of John as being very neat and precise so he'd need to emphasise those characteristics for me.

Karen, I think that is the Duke of Crowborough (Charlie Cox) in the scene with Thomas (Rob James-Collier), not our man Matthew Crawley (Dan Stevens).

I am really enjoying 'Downton Abbey' and think they've done a marvelous job depicting the lives and relationships of the aristocrats and their staff. The character I have my eye on (and have ever since seeing 'North & South') is John Bates, who is played by Brendan Coyle. Any ideas how he might be cast in the Outlander saga?

Oops, you're right! I deleted the video from my post above since it's not really relevant. Thanks for pointing that out.

I like Brendan Coyle; also Jim Carter (Mr. Carson), who was in "Cranford", another excellent PBS series that I saw last year.

Dear Karen,
for me, he´s more a Stephen Bonnett, but it´s certainly only my mind :-) I think, Lord John has a "warmer" glance (is that the right word?) - not so frosty...

I understand what you mean (and yes, that's exactly the right word), but from what I've seen so far, I think he could pull it off. Lord John is a kind man with a definite sense of humor, but he also is a career soldier who is capable of gouging a man's eye out (as he did to Adams at the end of BOTB). The ideal actor would need to be able to portray both sides of him.

Karen,
Great find! I agree...he's pretty close to how I picture Lord John as I'm reading. Someone else recently recommended "Downton Abbey" to me...I'll have to watch.

I am really enjoying Downton Abbey. I haven't seen Elizabeth McGovern in a while and she is wonderful. I really love the costuming and of course Maggie Smith great too.

Nice pick, Karen. I most definitely think that Dan Stevens could pull it off. Why, he even looks like a lord, or a duke, or something befitting royal origins. I would have to hear him speak to really be sure, but as for the look of him, I agree. He looks like Lord John.

Yes, I too am enjoying Downton Abbey. The Old Man's daughter is watching it with me and she totally agonizes when an episode ends and she has to wait another week to find out what will happen next! LOL It's great fun! Of course, I'll watch anything with Maggie Smith in it.

I agree with you about Maggie Smith. She's terrific in that role.

Oh MY! He's really good, Karen. You're not kidding; he's pretty much what is in my brain for LJG, too. Looking forward to checking him out on youtube!

I can totally see it! And if you haven't watched the new Masterpiece Sense and Sensibility, you must! He plays Edward Ferrars.