The site is well laid out, visually appealing, and easy to navigate. I like the fonts and colors. (I like the little DG "monogram" that shows up when it's in a tab, too. Very nice. <g>) The focus is back where it should be -- on Diana, her books, and topics of interest to readers and fans. That's a vast, vast improvement over the old site!

The best part, for me personally, was discovering my picture at the top of the Links page! 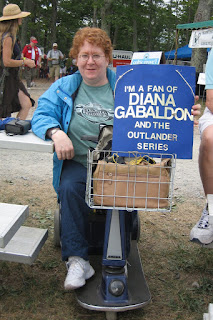 I had offered, at the last minute, to let Diana use this picture if she wanted to, and I'm just delighted to see it on the site! (My mom is pretty pleased, too. She's the one who took the photo, at the Grandfather Mountain Highland Games in July, 2010.)

As if that wasn't enough....it gets better. <g> Here's what Diana had to say about that picture.

The photo above is of Karen Henry, the irreplaceable "Czarina of Traffic," who manages all of the threads, topics, and general chaos in the Diana Gabaldon folder. This photo was taken at a Highland Games, where she was meeting a number of other Forumites who didn't know each other by sight.

That title, "Czarina of Traffic", always makes me laugh. As for "irreplaceable", well, what can I say? I'm flattered, of course! <g>

My homemade sign was extremely effective at the Highland Games, and Diana was kind enough to autograph it for me when I saw her in September in Winston-Salem, NC. 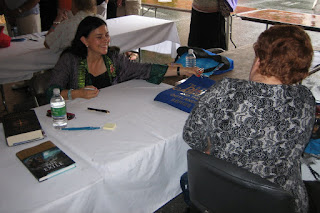 Every once in a while, people ask me if Diana reads my blog. My usual response is, "I have no idea, but she certainly knows it exists." Well, yesterday I got the answer to that question. I was thrilled to see that Diana mentioned Outlandish Observations on the Links page, calling it "a beautifully done, entertaining blog". Wow. Thank you so much, Diana! That means a lot to me.

Finally, I was glad to see that the new web site prominently features a link to the Compuserve Books and Writers Community. For those of you who don't know, that's the online community where Diana hangs out, and I am Section Leader of the Diana Gabaldon folder there. If you have a question or a comment about anything relating to the books, feel free to post on Compuserve. We're always happy to see new people on the forum, and Diana likes to hear from her readers.

Congratulations to Diana on the launch of the new web site! It looks terrific, and I'm having a lot of fun exploring it. I would really encourage the rest of you to do the same.

Congrats Karen! You do such a wonderful job on this site, and I'm sure on Compuserve too (though I don't get over there much.) I've loved DG's books since Outlander first was published, have listened to all (love Davina Porter!), and just ordered the musical CD. Have you listened to the LJ books? I did recently and so glad I did. I have a feeling he and Percy will play important parts in the next Outlander book, and getting to know LJ better was so much fun. Best wishes!

Thanks for the kind words! :-) It's always interesting to me to hear from someone who found Diana's books in the very beginning, because I only discovered the series myself a little over four years ago. And yes, I have indeed listened to Jeff Woodman's readings of the Lord John books. He's excellent, for the most part, though I do not care for his Jamie-voice at all.

Congratulations on your shout-out in Diana's new website! You knew your homemade sign would be useful, but little did you know it would become, shall we say, famous? Keep up the good work, on Compuserve and here. I always enjoy the interesting tidbits you come up with, adding to the educational value of the Outlander series. (And yes, depictions of Jamie's butt are, um, Art Appreciation...)

That sign was a last-minute inspiration, and it turned out to be a tremendous success. I will have no hesitation about using it at any future Gatherings or book-signings.