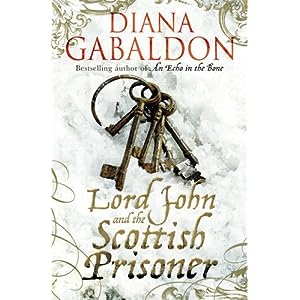 Some interesting news about SCOTTISH PRISONER this past week:

Diana continues to make progress on the writing, which she expects to finish in the next few days.  Here's what she said Thursday on Compuserve:


I counted up yesterday (gettin' down to it) and have 110,000 words, plus the few hundred I did in the midst of racing to and fro today....I do think it's going to come out pretty darn close to the 120,000 I was aiming for.  Three and a half (more or less) scenes to write, one messy one to corral and tidy up, and about a dozen little bridges for getting from point A to B, C, D, etc....and that's IT.  (Well, bar reading through and checking for water-tightness, which might take a couple of days.)

This is great news, and I'm so glad that the writing is going well.  (I don't know how many pages 120,000 words equates to, but if it ends up around the same length as BROTHERHOOD OF THE BLADE, I'll be happy.)

It is looking more and more likely that SCOTTISH PRISONER may be out on November 29, 2011.  This is NOT official, I hasten to add!  Diana has been making references to a late-November release date, but when I asked last week if they'd settled on a definite date, she said,


Not totally official yet-- I think they're waiting to see if I _really_ deliver the manuscript this month <g>--but there's a rapprochement between US and UK, at least.

If you're wondering what her UK and US publishers have been arguing about, look here for the details. I think it's great that they managed to come to an agreement, even if it's not 100% finalized yet.

I'm starting to see that November 29 date in various places online, though, so I think I believe it:


Interestingly, the Random House site lists the book under the title THE SCOTTISH PRISONER (A Lord John Novel).  I don't know if they've decided to change the title officially from LORD JOHN AND THE SCOTTISH PRISONER, or if that's just a mistake on the part of whoever put the information online.  Diana is in San Diego at a conference over the weekend, but when she comes back next week, I'll ask her about this.

[UPDATE 6/20/2011 6:52 pm:  Diana confirmed this on Compuserve today; the title has indeed changed to THE SCOTTISH PRISONER (A Lord John Novel).  Look here for details.]

Anyway, please remember that all of the above information is subject to change!  Until Diana confirms it, or makes some sort of announcement on Compuserve, her blog, or her web site, please don't take any of this information as set in stone.  I'm just passing it on because I thought it was interesting.
diana gabaldon final frenzy lord john and the scottish prisoner outlander release date

Why does Diana have to write 120,000 words or whatever? Why can't she just write the story as she is led....can it not be longer or shorter than the others in the series? Surely she would have enough clout with the publishers to make the book any length she likes?
Julia

Julia - that's a good question, but I don't know the answer. Why don't you ask Diana directly, on her blog or on Compuserve? (Or let me know if you'd like me to ask Diana on your behalf.)

Karen, perhaps you should ask Diana as she knows you. Be interesting to see her response - thank you!

Julia - all right, I'll ask her. In a few days, after she's done with the Final Frenzy stage of SCOTTISH PRISONER and has more time to answer questions.