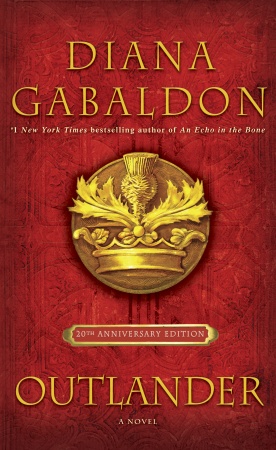 If you are on Twitter, you can help us celebrate the publication of the 20th Anniversary Edition by tagging your tweets on July 5th with #Outlander20.  (Thanks to Susan McCreadie, aka the_bothy on Twitter, for the suggestion!)  When I mentioned this idea to Diana on Twitter the other day, her response was, "#Outlander20 sounds like a great idea to me!"

Please help us get the word out to all the OUTLANDER fans on Twitter.  And even if you don't have a Twitter account, you can see all the #Outlander20 tweets here.

My Barnes and Noble finally got this in stock! It's beautiful! It's my first 'real' copy of the book, the rest being only on my Nook right now. I only just started the series! So, I'm glad that this was the first 'real' book I've gotten my hands on...

It's a gorgeous-looking book, isn't it? I just love the way it felt in my hands, when I picked up a copy briefly in B&N on Tuesday.

Hope you enjoy the audiobooks! I think Davina Porter's narrations are just wonderful. She gets better as the book and the series progresses.

It's lovely! And I didn't realize it included selections from Outlander The Musical as well...so glad to have it in my possession!