Diana Gabaldon is heading off to Lithuania for the Vilnius Book Fair (February 23-26), followed by a few days in London with her husband, Doug.  Don't be surprised if there are no new #DailyLines on Facebook or Twitter for a few days, as she has no idea what the internet access in Lithuania will be like.  She assured me that she will have wifi in the hotel in London, though, so she should be back online around the 27th.

I don't know if anyone following this blog lives in Lithuania, but please spread the word to anyone you may know who might be interested.  Diana has never been to Lithuania before, and it will be interesting to hear her impressions of the country.

In case you're wondering, no, she's not planning any public appearances during her stay in London.  That part of the trip is just for relaxation. <g>

Meanwhile, when Diana is traveling, she leaves me "holding the fort" in the Diana Gabaldon folder on the Compuserve Books and Writers Community:

Actually, though, I'm not much of a cat person.  My friend Cathy MacGregor told me years ago that I have a "border collie personality", and it's absolutely true.  It happens to be a very good fit with my job as Section Leader on Compuserve, a position I've held since 2008.

What does a "border collie personality" mean?  Well, the general idea is that I'm always gently but firmly herding people in the right direction. <g>  Chasing after stragglers and the ones who wander off on their own.  That sort of thing.

It happens to be just the sort of temperament required to manage a very active (but constantly shifting) group of forum members, where new people join the discussions on almost a daily basis. I hope I'm not quite this obsessive, though! 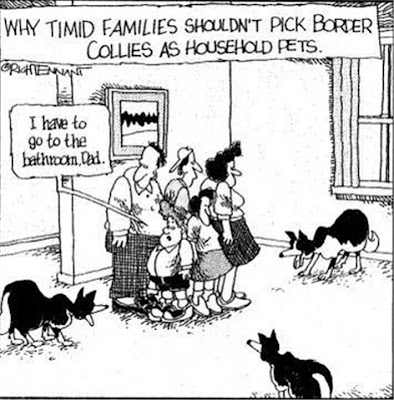 Please keep in mind that it's meant more or less as a joke. <g>

If you have questions or comments for Diana, you might want to wait for a few days.  She'll be back home on March 3rd.
border collies compuserve books and writers community diana gabaldon lithuania vilnius book fair

You're doing a great job at Compuserve, Karen, I can give you that. Thank you so much for it!

Hi Karen! I've just read on Facebook about Diana's trip to Vilnius Book Fair and I just happen to live in Lithuania half-time :-)(the other half in Stowe VT). I am definitely going to try to meet up with her at the book fair! Although, I am having trouble discerning what her schedule will be there. I see there is a book presentation on Saturday at 11:00 am. Are there any other events she will be involved in there? I truly hope she will have a wonderful time here. She's my favorite author and she's now visiting my favorite place in all the world... I hope her "guides" will do it justice. Thanks for holding down the fort and any additional info. you have on events here would be deeply appreciated. The cities here have great internet, but I am in the countryside (fairly 18th century life, but some things I cannot live without :-D) so just have mobile internet which is hopelessly slow. Thank you in advance... Lina

I don't know anything about Diana's schedule at the Book Fair, but she will be there all four days.

I hope you get a chance to meet her in person!

Hi Karen, I am a long time lurker on compuserve and Outlandish Observations. I just wanted to thank you for all you do on compuserve and for such an entertaining and imaginative blog. You always have something different and fun on your blog and I look forward in the evenings to check in and see what's new. I am so glad that you are going to get to go to Scotland this summer and I can't wait to hear about it and plan my "someday" trip. Sue Anderson

Thanks so much! Are you the same mymacintyre who sometimes joins the MOP chats?

I can't wait to go to Scotland in July. It will really be the trip of a lifetime. :-)

Karen, Yes I am the same mymac on the MOP chats. :)