Here are this week's Friday Fun Facts.  I hope you enjoy them!

1) Here's what a bodhran sounds like when played by an expert. Thanks very much to my sister Alice, who found this video several years ago. I can't embed it here, unfortunately, but click here to watch it. The performer's name is John Joe Kelly, and I think he's terrific!


I sat up, listening hard.  It was a drum with a sound like a beating heart, slow and rhythmic, then trip-hammer fast, like the frantic surge of a hunted beast.
I could have told them that Indians never used drums as weapons; Celts did.  It was the sound of a bodhran.
What next? I thought, a trifle hysterically, bagpipes?
It was Roger, certainly; only he could make a drum talk like that.  It was Roger, and Jamie was nearby. 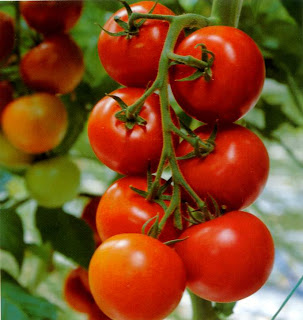 2) Tomatoes were widely believed to be poisonous in the 18th century. Ronnie Sinclair certainly thinks so.


"It's the tomato fruits she's using, Mac Dubh," he hissed, tugging at Jamie's sleeve and pointing at the red-crusted bowl.  "Devil's apples! She'll poison us all!"

(From THE FIERY CROSS, chapter 13 ("Beans and Barbecue"). Copyright© 2001 by Diana Gabaldon. All rights reserved.) 3) Did you ever wonder where Rollo came from? I found this in the Wikipedia article on wolf-dog crossbreeds:


The first record of a wolf and dog breeding in Great Britain comes from the year 1766 when what is thought to have been a male wolf mated with a Pomeranian bitch, which resulted in a litter of nine pups.

And just a few months later, in the summer of 1767, Ian acquired Rollo. Coincidence? Maybe, maybe not. <g>

Another interesting bit of trivia: The 18th-century surgeon, Dr. John Hunter, whom we met for the first time in the Lord John story "The Custom of the Army", is a real historical figure who apparently had a fascination for wolf-dog hybrids, and kept one as a pet for many years.


Hunter had been given the hybrid as a puppy in about 1766 by a menagerie owner known as 'Wild Beast Brookes,' who had bred a litter of nine puppies from a male wolf and female dog. While Hunter clearly adored his unbiddable half-breed as much as it adored him, it scared the life out of passersby. Eventually it was stoned to death by a mob who mistook it for a rabid dog."

And yes, that's the same John Hunter who is mentioned in ECHO as a distant relative of Denny and Rachel. <g> 4) Charles Edward Stuart really did have a picnic set made of gold and sterling silver, shown above. This must be the same picnic set mentioned by Lord Lovat, Jamie's grandfather, when he was considering what gift to send to Charles Stuart:


"Ha," said his lordship with satisfaction.  "We'll send the gold and sterling picnic set.  That's rich enough, but too frivolous to be interpreted as political support.  Besides," he added practically, "the spoon's dented."

(From DRAGONFLY IN AMBER, chapter 41 ("The Seer's Curse"). Copyright© 1992 by Diana Gabaldon. All rights reserved.)

The prince left his picnic set on the field at Culloden, as Roger explained to Bree in DRAGONFLY, Chapter 4, "Culloden".

5) I like the subtle little bits that connect different parts of Diana's books together.  Here is one of my favorites, from DRUMS OF AUTUMN.

Jamie, remembering the time he spent lying in the snow, dreaming about the daughter he thinks he'll never see:


"Has she a birthmark, Sassenach? And if so, did ye tell me of it?"
"She does," I said slowly, thinking.  "I don't think I ever told you about it, though; it isn't visible most of the time, so it's been years since I noticed it myself.  It's a--"
His hand tightening on my shoulder stopped me.
"It's a wee brown mark, shaped like a diamond," he said.  "Just behind her left ear. Isn't it?"
"Yes, it is." It was warm and cozy in bed, but a small coolness on the back of my neck made me shiver suddenly.  "Did you see that in your dream?"
"I kissed her there," he said softly.

(From DRUMS OF AUTUMN, chapter 21 ("Night on a Snowy Mountain"). Copyright© 1997 by Diana Gabaldon. All rights reserved.)

Much later in the book, immediately after Jemmy's birth:


I glanced upward once, to see Brianna glowing, still smiling from ear to ear. Jamie was beside her, also smiling, his cheeks wet with tears.  He said something to her in husky Gaelic, and brushing the hair away from her neck, leaned forward and kissed her gently, just behind the ear.

(From DRUMS OF AUTUMN, chapter 64 ("Bottom of the Ninth"). Copyright© 1997 by Diana Gabaldon. All rights reserved.)

What a sweet, poignant moment!  And it gives me goosebumps now, thinking of both ends of that connection:  Jamie dreaming of the future, of the moment his grandson would be born; and then getting to witness it himself, something he surely never imagined or expected.  I like to think that Jamie remembered it, though, and that it was part of what made "his cheeks wet with tears" at that moment.

Oooo -- love this element of your blog, Karen. Keep'em coming!

Just wonderful "facts" this week. This week's posting is the best yet--and now I know that the lowly tomato is really a berry AND a perennial. The bodhran piece is stirring. Thank you, Karen.

Hello! Just coming home after a day out for lunch with friends, I rushed to my computer to read today's FFF.Great! I'm working my way to the series AGAIN, currently on ABOSAA..Thanks Karen. Christiane K

Wonderful as always. Especially the last one:)

These are wonderful observations!
"What a sweet, poignant moment!" Indeed Karen, I really enjoyed that, makes your heart swell. Thank You!

Karen, do you know where the picnic set is now? Is it on display somewhere? What an incredible piece of history to weave into the story!

Judy - that photo of the picnic set comes from the National Museum of Scotland website. I hope I'll be able to see it for myself in July! :-) But I originally got the link from the Outlander Book Club site here.

Fawn - I must have been on my 8th or 9th "re-listen" of DRUMS before I found that connection. I agree, it's really a sweet moment.

Hope you'll all stop by next Friday for more!

The part with Jamie and the birthmark gave me goosebumps.