My trip to Scotland, Part 1

There were 11 of us on the tour (including my mom and my sister Alice, and Betsy Green from LOL and her husband, Ross), plus Judy Lowstuter (who runs Celtic Journeys Tours), a Scottish tour guide named Alison (she was excellent, with a delightful Scottish accent that we all found a pleasure to listen to <g>), and the driver, Ian.  We started in Glasgow, and over the course of the week, visited many different areas of the country.
The weather was good, for the most part.  The final day of the tour, on Saturday in Edinburgh, was cold and rainy, but until that point we'd seen only a few sprinkles, and we had two sunny days in a row on Thursday and Friday.  Now I understand what everybody (including Diana) was telling me about the weather in Scotland changing in a heartbeat.  It really does! <g>

Food on the tour was excellent.  My favorite Scottish foods were cullen skink and sticky toffee pudding. <g>  I tried Irn Bru and thought it was pretty good, though a bit too sweet for my taste.

We visited a number of castles on the tour, but my favorite was Stirling Castle.  It was by far the easiest in terms of accessibility, and they had re-enactors in each room role-playing from 1546.  That was fun.

Favorite historic site:  Culloden, especially the Visitor's Centre.  Some of you may recall Diana's blog posts from 2008 about her visit to Culloden.  Go here and here to read her impressions of that visit. I think she described it very accurately.

Most surprising thing about Scotland:  it's very, very green, in a way that I've never seen before.  (Probably because I've never lived in a place where it rains as much as it does in Scotland. <g>)

The best advice I got prior to going to Scotland?  "Keep a journal of what you did each day, otherwise you'll forget the details."  I have detailed handwritten notes from each day, which I'll summarize here as best I can.  (This will be the first in a series of blog posts about my trip.)

My mom and I arrived in Glasgow about 7:30 am, after a smooth and uneventful flight.  Judy (the tour leader) met us at the airport.  Got into the hotel room around 10 and immediately took a 2 hour nap. <g>  After we woke up, we decided to go exploring in Glasgow, as the official part of the tour didn't start until the next day and my sister wouldn't be arriving until the evening.

We rode the "hop on hop off bus" (here) for an hour or so, with the bus driver pointing out various sights in the city.  For example, see the photo below with the statues.  The one on the left is Prince Albert (Queen Victoria's husband), and the one on the right is James Watt, the inventor of the steam engine.  (Click on the photo for a bigger view.) 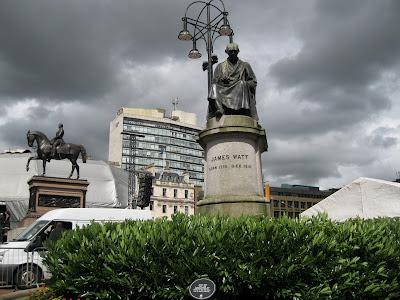 Despite the very ominous-looking clouds in this photo, it didn't actually rain for more than a couple of minutes while we were out that day.

At one point the bus stopped almost in front of an area where they were having a celebration for Armed Forces Day, and we got off the bus to watch.  This gentleman kindly let me take his photo.  He was part of a pipe band that was performing that day. 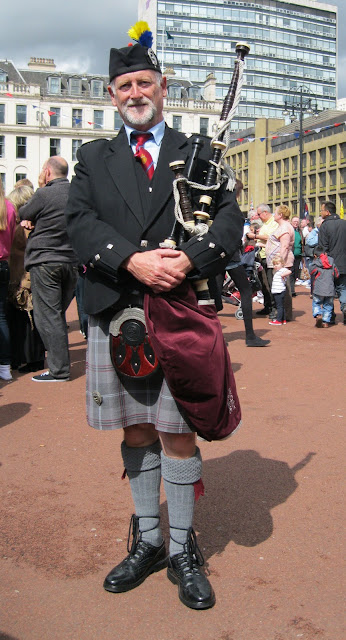 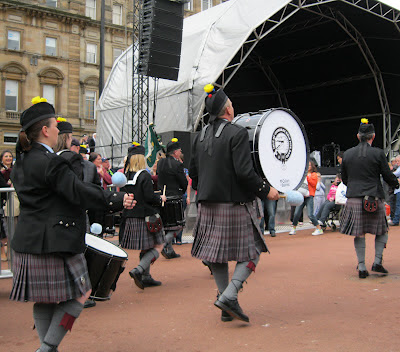 We took a taxi back to the hotel, where we had dinner and met the rest of the group for the first time.  (And had a very lively OUTLANDER discussion! <g>)  My sister Alice arrived just as we were finishing dinner.  She lives in Israel, and we hadn't seen her in almost a year, so it was good to have some time to talk before the actual tour began.

Here are the other blog posts in this series:

I live in Scotland (Argyll) and i am very much looking forward to your observations!!

I am also a fan of Sticky Toffee Pudding, and searched for the recipe, that I eventually got from an Australian cooking site. Rosemary HopkinsSticky Toffee Pudding
The famous, the one and only, the incredible sticky toffee pudding is a rich moist cake studded with sticky dates served hot in a glorious butterscotch sauce.

Mix dates and bicarbonate of soda in a heat-proof bowl. Pour boiling water on top and leave to stand. Cream butter and sugar until pale, then add eggs one at a time, heating well after each addition.
Gently fold in sifted flour, stir in the date mixture, and pour into a lightly buttered or pammed 7" square or round cake tin. Bake in a preheated oven 350 for 30-40 minutes, until an inserted skewer comes clean.

For toffee sauce, combine sugar, cream, vanilla and butter in a saucepan, bring to the boil, stirring, and simmer for five minutes. Set aside until ready to serve, then quickly reheat when needed.

Cut pudding into squares and place each square in the center of a warm dinner plate. Pour hot toffee sauce over each square and serve with fresh cream, or whipped cream, or leave out cream.
Serves Six.

Note: Traditionally, the sauce was poured over the cake and returned to the oven for the last five minutes of baking to get really sticky. I prefer this method, where sticky sauce meets steamy pudding on the plate.

Wow, thanks so much for taking the time to post the recipe!

I, too, was surprised how green Scotland is ~ and I was there in January! It's equally as green as Ireland, but no one ever makes mention of it.

So glad you enjoyed your tour, and can't wait to read more.

OMG! Sticky Toffee Pudding is my favorite all time dessert! Once I had it there I had it at every restaurant that served it. I haven't had any success at making it at home though. It's just never quite the same. I'll try the above recipe and see how that one goes.

I've been following your blog in my Google reader, but somehow it skipped your Scotland diary and I've just found it - can't wait to keep reading!

I'm an Australian who bumped into, fell in love with, and married her own red headed Glasgow man around 12 years ago - we now live in Germany.

I love Diana's books and anxiously await each new one. They are great to get lost in!

Okay, off to read some more of your diary on this sunny Germany Sunday morning. Thanks for writing!

wow I love this! do you have a place it is all together so i can print it out to enjoy and to get ideas for my own trip to Scotland in July. Will u be there again in JUly this year? would love to meet such an interesting lady who shares my love of all things Outlander. I am going to Scotland because my husband asked me what i wished for my 70th birthday and i said a trip to Scotland to walk in some of where Jamie's and Clare's story is told. love what u r going for all of us fans. a lovely gift. thank you