My trip to Scotland, Part 5

At breakfast in the Culloden House Hotel, lots of talk about ghosts haunting the place.  Judy told us Room 5 is haunted (that's one of the upstairs rooms; my mom and my sister and I were on the ground floor).  A member of our group, Shayna, took photos of one of the rooms on the top floor and saw something like a ghost in the mirror.  I saw her photos and it was pretty spooky!  Judy says some people on her previous tours have heard things at Culloden House:  boots and clanking metal on the roof, etc.

First item on today's agenda: a boat ride on Loch Ness (1.5 hours).  It was very peaceful out on the water.  Unlike Jamie, I always enjoy boat rides like that. <g> (Click on any of the pictures to enlarge them.) 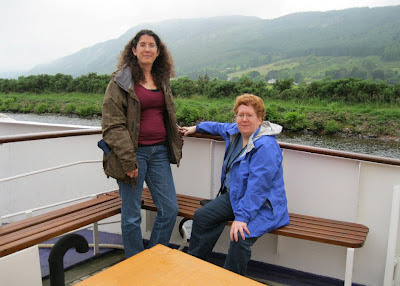 We had some drizzle but for the most part the rain held off during the ride.  Loch Ness is very deep (over 700 feet) and the water is extremely murky because of the peat content.  (No, we didn't spot Nessie! <g>) 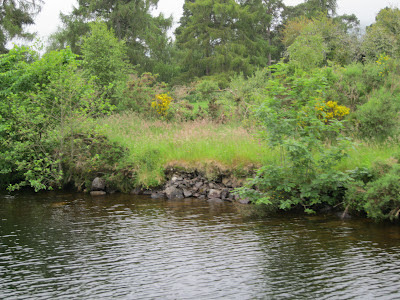 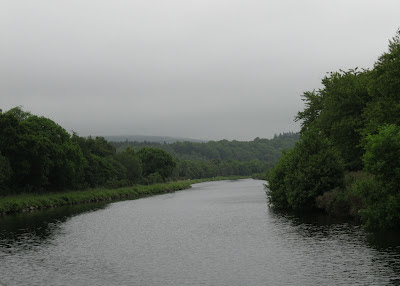 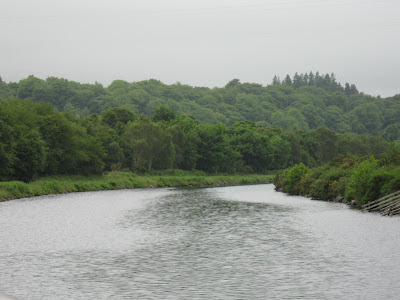 We got off the boat at Urquhart Castle, a ruined castle that sits at the top of a very steep hill.  Judy had called ahead, and they had a scooter waiting for me, a 4-wheel model, that I used to get up to the castle. 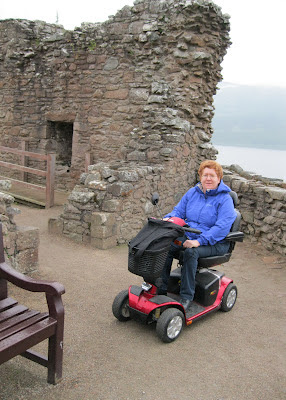 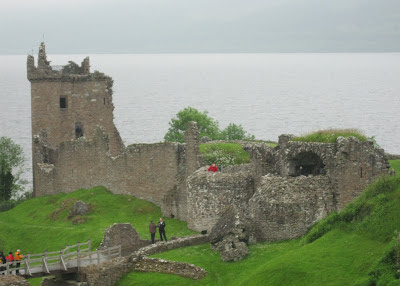 Toward the end of that walk, I needed some pushing, because the scooter they gave me didn't have a fully charged battery.  I was able to see some parts of the castle ruins for myself, like the kitchens, and one of the guides showed me a book with pictures of the parts I wasn't able to see.  (My sister also took pictures of the rooms I didn't see.)  We went into the Visitor's Centre and saw a movie about the castle, then had lunch.  Looking at the castle from a distance, my first impression (knowing nothing about its history) was that it must have been bombed in WWII or something.  I was surprised to learn that it was destroyed on purpose by Williamite troops (i.e., supporters of King William) in 1692, in order to keep it from being used by the Jacobites.  The castle was never rebuilt. 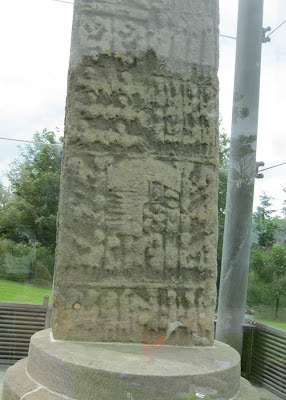 It's kept inside a sort of glass-walled box (whether to protect it from the weather and vandals, or to keep it from falling down, I'm not sure) so we weren't able to touch it, but its size is impressive.  There are varying theories on its origins, but no one knows exactly how old it is.

Next stop: Elgin Cathedral (pictured below), and the Biblical Garden adjacent to it. 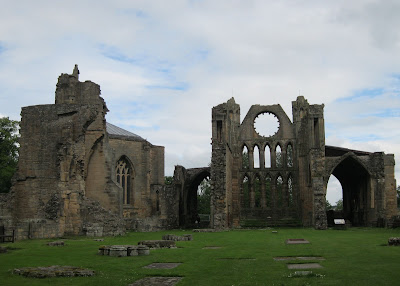 We were actually much more interested in the garden than the cathedral, and we had a good time walking around there and taking pictures of the beautiful flowers. 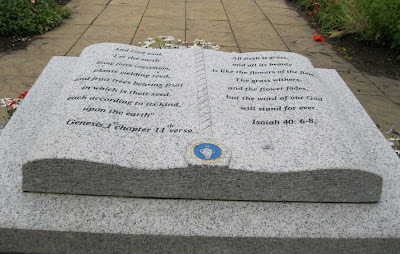 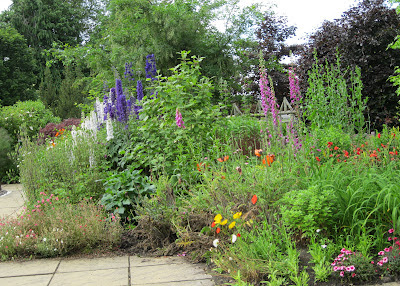 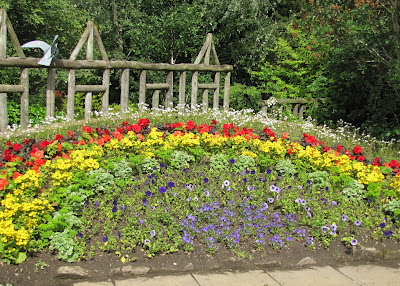 The Biblical Garden is supposed to contain samples of every type of plant mentioned in the Bible -- 110 different species!  It's definitely worth seeing if you're in the area.

We proceeded to Huntly and checked into the hotel, where I found a decanter of sherry and two glasses on the desk waiting for us in the room my mom and I shared.  That was a very pleasant surprise! 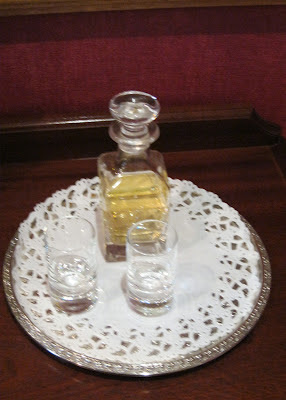 I found out later that they had given this to us because we paid extra so my sister could have a room to herself.  So we had a wee toast to American independence (this being the 4th of July, after all <g>) and went to have dinner with the rest of the group.

After dinner, Judy passed out the questions for the OUTLANDER trivia contest.  There were 50 questions, some easy, some challenging.  A good mix of questions.  Here are a couple of the harder ones:

"Claire's name for 'Beaton's closet of horrors' at Castle Leoch is....?"
"What are Claire's parents' names?"

So I was going through this list, feeling pretty confident, and then I hit the following question: "On which hand does Claire wear Jamie's wedding ring?"  It looked like an easy question, but I just couldn't remember.  I went over and over it, and couldn't come up with an answer I was sure of.  So I guessed (incorrectly, as it turned out).  Blame that one on travel fatigue, and the fact that I'd had a couple of drinks that evening. <g>  It was definitely a fun way to end the day, though.  (I'll talk more about this in a future installment.)

Fabulous tour pictures. You are making me want to go more and more each day.

Thank you for the Urqhart Castle mention--I didn't get to see it but from afar. Interesting about William's troops. I didn't even notice the garden at Elgin--don't know how that happened. Flower photos are beautiful!