My trip to Scotland, Part 6

Woke up with a bad cold.  Fortunately, I was prepared, having brought a variety of cold and sinus medicines with me.  I took a Sudafed and had a cup of tea, and felt a bit better.

This morning we drove to Castle Fraser, in Aberdeenshire, in the eastern part of Scotland.  (Click on the photos to enlarge them.) 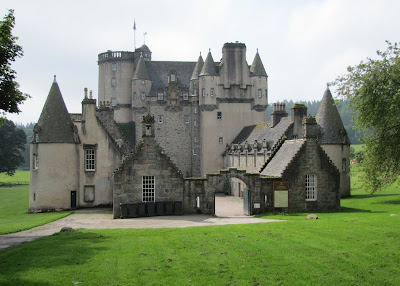 The castle is not very wheelchair-accessible (with narrow winding staircases leading to the upper floors), but I saw as much as I could on the ground floor.  They had a number of interesting artifacts to look at on the ground floor, including this collection of 18th and 19th century swords, which I liked very much. 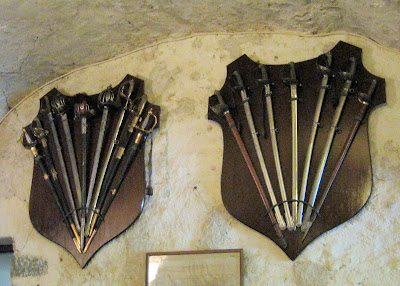 My sister Alice went upstairs with the rest of the group to tour the castle, while my mom and I stayed downstairs.  I saw a slideshow with photos of the upstairs rooms.

Here's something interesting that I read in the castle's guidebook, about the Frasers of Inverallochy who lived in the castle in the mid-18th century:


When Prince Charles Edward Stuart, son of James Francis, landed in Scotland in 1745, both Inverallochy's brother and son joined the Jacobite army. The son, Charles, commanded the Fraser Regiment at Culloden and was left wounded on the battlefield. The day after, he was found by General Hawley who is said to have ordered the young James Wolfe to kill him. Wolfe refused and Hawley had to order the deed to be done by an ordinary soldier. Thirteen years later Inverallochy's third son, Simon, died fighting under the same General Wolfe at Quebec.

This is the same General Wolfe who appears in Diana Gabaldon's story, "The Custom of the Army".

One of the most famous Frasers to live in this castle was Charles MacKenzie Fraser, who was an officer in the Duke of Wellington's army during the Napoleonic wars of the early 19th century, and like Ian Murray, lost a leg in battle.  Some people think he looks a bit like Jamie, but whether you agree with that or not, you have to admit he's a handsome man. 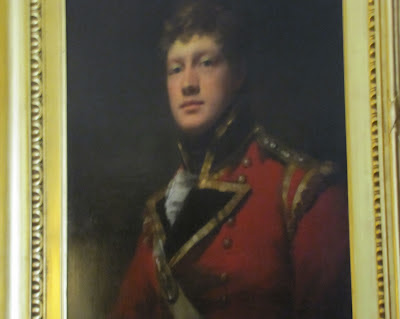 Apparently he had several different wooden legs, for different occasions. 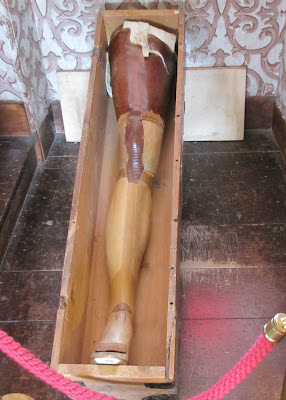 My sister took this photo of a 19th-century commode.  Possibly like the one Brianna used in DRUMS, at the beginning of chapter 59 ("Blackmail")? 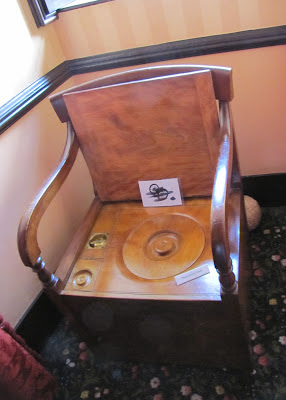 When I asked the lady at the reception desk at the castle why these Frasers are so far away, geographically, from the Frasers of Lovat (it must be 100 miles or more from Beauly, which was quite a distance in those days), she said something to the effect that the distance let them stay out of each other's way.   Which makes a lot of sense to me. <g>

After an hour or so, we went outside to explore the walled gardens at the castle.  They are magnificent, and it was a beautiful sunny day (finally!), so that was fun. 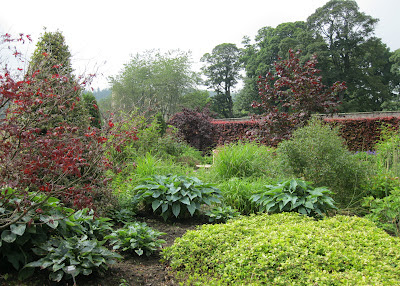 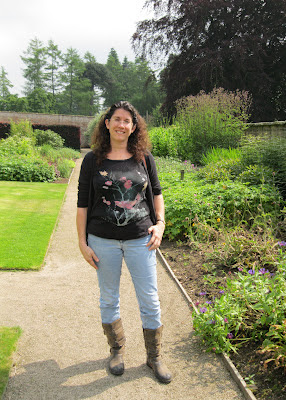 Alice joined us halfway through, then we had lunch in the castle's tearoom.  These bells are located just over the doorway as you enter the tearoom.  If you've seen "Downton Abbey", they'll look familiar, as they're similar to the wall of bells shown in the opening sequence of that show. 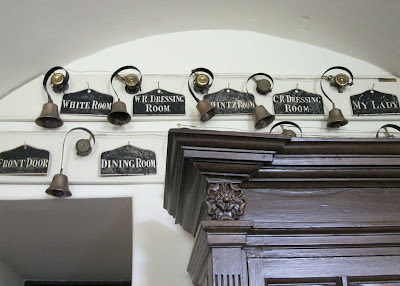 I bought a puzzle in the castle's gift shop, a beautiful landscape of the Highlands.

Our next stop after lunch was a stone circle called Easter Aquhorthies, near Inverurie.  (The second word is pronounced "A-quor-thees".) I went a good way down the path only to discover that it turned very muddy, so I turned back without getting close to the stone circle.  Alice went ahead to take pictures. 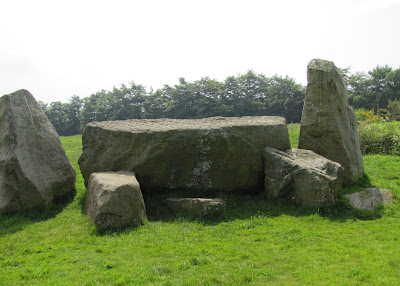 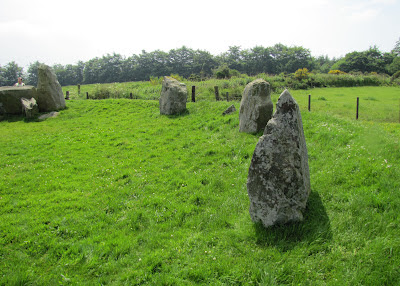 Meanwhile, my mom and I took photos of ourselves and the plant life nearby. The photo below is proof that there are indeed sunny days in Scotland! <g> 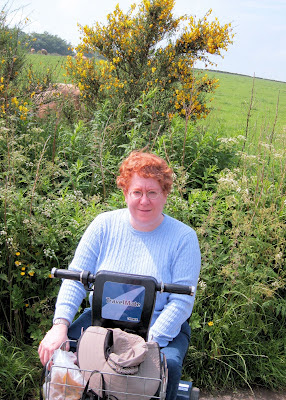 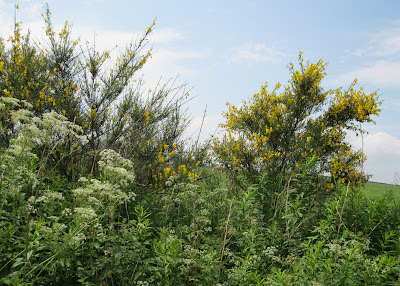 I'm not sure if the plants with the yellow flowers are gorse or broom.  We saw these all over the place in Scotland.

According to our Scottish guide, Alison (pictured below, on the right, with our tour leader, Judy Lowstuter), it's very difficult to tell the difference between gorse and broom.  But she said when the broom turns yellow, that used to be the sign for the gypsies to start traveling around the country.  She also said that the white flowers shown on the left in the photo above are poisonous to horses.  I'm not sure what they're called. 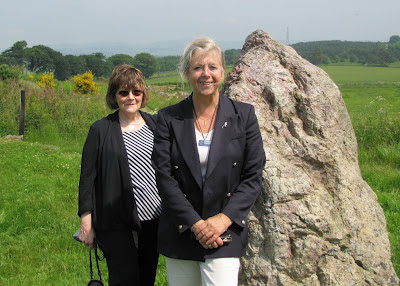 Our last stop of the day was a whisky distillery called Glen Garioch (pronounced "Glen Geery").  This was an unexpected addition to our itinerary, requested by several people in our tour group.  We tasted their house blend, which wasn't bad.  (This particular distillery was taken over by a Japanese company several years ago.)  The tour of the whisky-making facilities turned out not to be accessible, so my mom and I waited in the sitting area until the group came back.  (Alice said it was interesting, but it smelled terrible!)  Then we had another dram.  As you might imagine, I was very sleepy on the way back to the hotel in Huntly. <g>   I had dinner in the hotel pub with my mother and sister.

All in all, even though I wasn't able to see everything in person, it turned out to be a good day, better than I had expected.

Here are the previous blog posts in this series.  Please check back soon for more updates!

Love your picture of Castle Fraser. In terms of castle size and from what you saw, is this the usual size of a castle or would you say it is bigger or smaller?
I am just loving your posts.

Fantastic photos, Karen. And that portrait of Charles MacKenzie Fraser is positively haunting!

Have just gone through all eight parts of your journey again. What a marvelous trip with so many memories. Thank you so much for sharing.

Thanks for sharing your great trip with us! :)

Hi Karen, I've been away from your site for nearly half a year but it's lovely to have so much of interest to catch up on!

For info, your photo is of broom. Normally the bush flowers and then the green leaves appear - your timing happens to be when it's half and half! Easiest way to tell them apart is that gorse is prickly and broom is not.

Also, the plant that is poisonous to horses is called Cow Parsley.

Great to run across your site on linked to pinterest. I am really looking forward to going through the whole site! Thanks from this Montana Lady.