My trip to Scotland, Part 7

We left Huntly at 9 am, passing briefly through Aberdeen.  I thought of the scene in VOYAGER where Claire tells Jamie about the death of her patient, Graham Menzies:


"It was Graham who sent me to Scotland,” I said at last, feeling slightly choked. “He asked me to go someday--and say hello to Aberdeen for him.” I glanced up at Jamie suddenly.

“Dinna trouble yourself, Sassenach.” Jamie squeezed my hand. “I’ll take ye there myself--when we go back. Not,” he added practically, “that there’s anything to see there."

So as Judy announced that we were coming into Aberdeen, I said a quick "hello" under my breath, on Claire's behalf. <g>  Many of the buildings in Aberdeen are made of granite.

We stopped briefly for photos of Dunnottar Castle.  It was such a quick stop that I opted not to bother to go closer.  (I still had a cold, and was trying to conserve my energy for later in the day.)  Here you can see another example of how valuable my sister Alice was on this trip, in her role as scout and photographer. <g>

Here's what I saw from near the coach.  Note the castle in the distance. (Click on any of the photos to enlarge them.) And this is a photo my sister took of Dunnottar Castle. 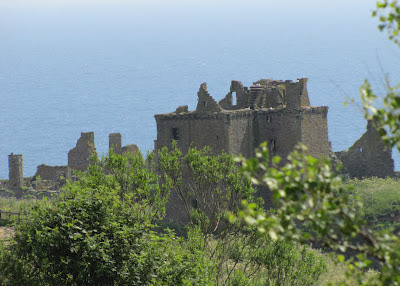 Needless to say, I like her version much better! <g>

Our next stop was in Dundee, to drop off Betsy and her husband at the train station.  (They had to go into Edinburgh so Betsy could replace her lost passport.)  While we waited for the group to return from a "comfort stop", I took these photos of the Discovery, a ship that sailed to Antarctica in 1900, which is moored within sight of the Dundee train station.  It looks to be in remarkably good condition, considering how far it traveled! 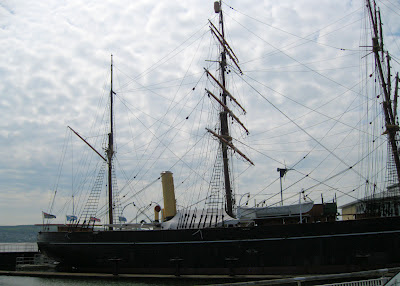 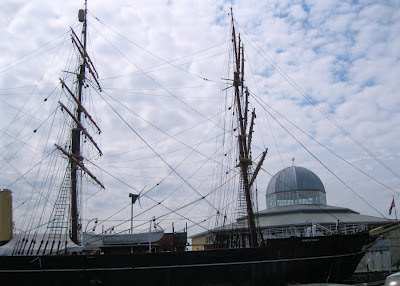 Oh, and speaking of "comfort stops", also known as bathroom breaks.  At one point on Friday, we stopped at a place that had won a "Loo of the Year" award.  (No, I'm not making that up!)  It happened to be the only place we saw on this trip that had pay toilets (20 pence), but the attendant let me get in for free.  I didn't think to get a photo of the "Loo of the Year" sign (honestly, it never occurred to me to bring my camera along to use the restroom!), but it was prominently displayed.  The place was certainly very clean, I'll say that for it.  <g>

During the long drive in the morning, Judy gave out prizes for the contests earlier in the week.  (There was an OUTLANDER-themed scavenger hunt, as well as the trivia contest I mentioned in a previous post.)

As she passed out the graded quizzes, Judy said, "The average on these quizzes" -- in all the time she's been doing these OUTLANDER tours, she meant -- "is about 18 out of 50; good is 30 or above; and if you score 45 or more, you're living in the books."

I won the trivia contest with a score of 46 out of 50. <g>  (Well, "living in the books" is maybe just a slight exaggeration, but I certainly can't deny that I've been immersed in All Things Outlander on a daily basis for the last 5 1/2 years!)

The prize was a polished chunk of agate from Perthshire, which Judy got at Castle Leod. 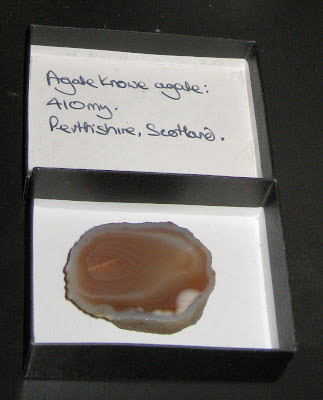 Judy said that Lord John (the Earl of Cromartie, clan chief of the MacKenzies) collects these.  I think it's beautiful, and a wonderful memento of the trip.  The description inside the box says, "Agate Knowe agate, 410 my, Perthshire, Scotland", and there is a tiny label on the back with the date when it was found: "22/11/90" (just one day before my birthday!)  Thanks, Judy!!

We visited Stirling Castle in the afternoon.  Weather was partly sunny but VERY windy!  After my experiences at Urquhart and Fraser castles earlier in the week, I didn't have high expectations for the accessibility of Stirling Castle, but I was delighted by what I found!  They sent a car to bring me and my scooter up to the top of the very steep hill where the castle is situated.  We got there just in time for the start of a tour, and my sister and I went on the tour while my mom took some time to rest. 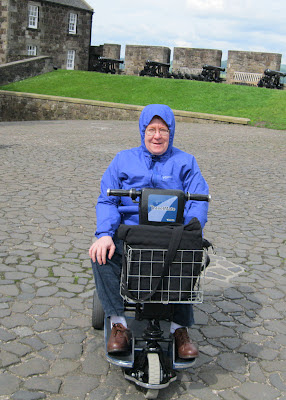 I was glad that my jacket had a hood.  Did I mention it was windy? And I had a cold? <g>  Never mind; I still enjoyed myself thoroughly on that tour, as you can see from this picture. The tour turned out to be completely accessible, much to my relief.  The tour guide was excellent (although his accent was difficult to understand at first) and he told us a number of entertaining anecdotes.  One in particular that I remember concerned a man in the 1500's who attempted to fly by covering himself with chicken feathers and jumping out of one of the castle windows.  He somehow survived the fall, and told the king that his mistake was using a flightless bird!  (He said he should have used eagle feathers instead. <g>) 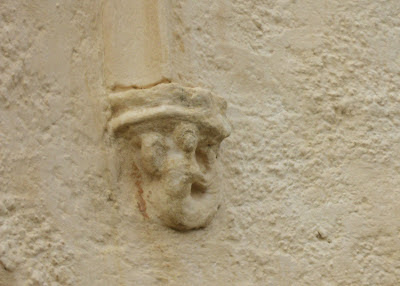 The photo above shows a bit of the "harled", or plastered, stone on the outside of the castle. When you read about Lallybroch's "white-harled stone" in the OUTLANDER books, this is what it looks like, except that Stirling's exterior is yellow, not white. 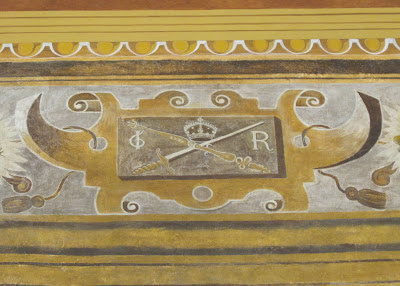 The symbol on the left in the photo above, resembling an I with a 6, is a bit of a mystery. Historians aren't sure exactly what it means, although I liked the explanation that it could stand for "Iacobus 6" (King James VI). It could also be a CI, though, for Charles I, according to the guidebook I bought. 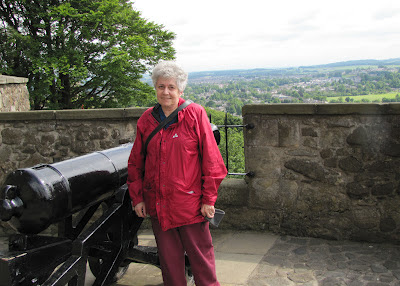 Here's my mom, with a cannon at the top of Stirling Castle.

After the tour, we went downstairs to the newly renovated rooms inside the castle.  They just completed a renovation about a year ago, so everything we saw was in excellent condition.  We saw the king's bedchamber, the queen's chamber, and a number of other rooms.  They had re-enactors in every room, in period costume, role-playing from 1546, which was fun. 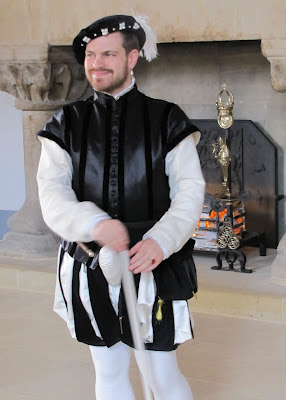 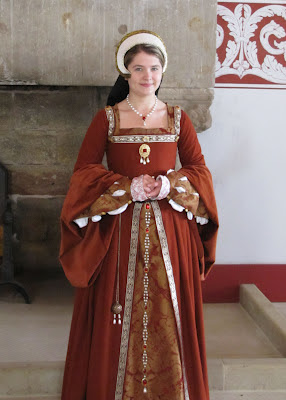 There were very beautiful tapestries and other decorations throughout the castle.  The colors are just magnificent! 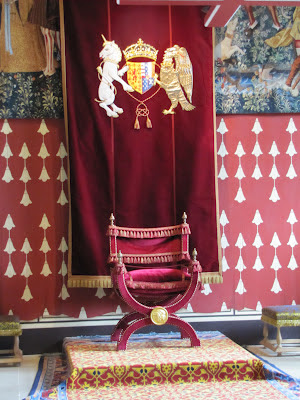 Probably the most famous works of art at Stirling are a set of reproductions of the Unicorn Tapestries from the 16th century. 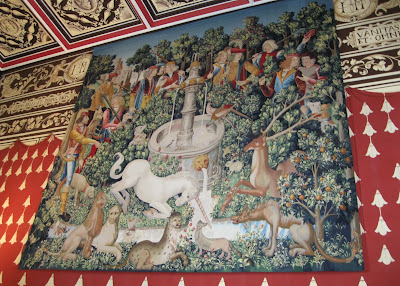 I kept wondering, "Why unicorns?"  I was surprised by how many there were, throughout the castle. 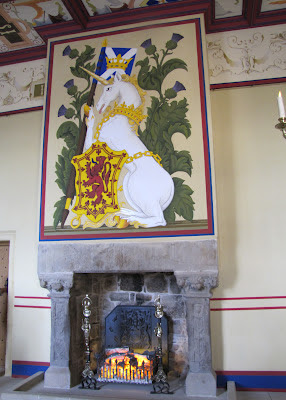 We stopped for lunch at a small cafe on-site.  At the gift shop, I bought some Scotch tablet (which was good, but so sweet it made my teeth ache!) and a guidebook to Stirling Castle.

I thoroughly enjoyed our visit to Stirling and I had no real difficulty in getting around.

We proceeded to Edinburgh and checked into the Knight Residence, which is a bit like a Residence Inn, with individual apartments, complete with kitchen and laundry facilities.  At this point, the "official" part of the tour was over, and we were free to do whatever we wanted in the time remaining to us in Edinburgh.  My mom and sister and I had dinner at a pub a few blocks away from the hotel, and made plans for some sightseeing the next day.

I'll talk more about our visit to Edinburgh in the next installment.  Here are the previous posts in this series:

Really enjoying these posts and photos, Karen! They're so making me want to take this trip--it sounds like you had an amazing time!

So glad you got to experience Stirling Castle. It must have been so frustrating many times. I will have to add Stirling Castle to my list of must sees when I am there.

Thank you for blogging your fantastic trip. The photos were a real bonus. JerryT

Love these posts, Karen! Looks like you had an amazing time. I wish I'd had a chance to see those old ships. Or even Inverness - I haven't been further north than Edinburgh. Yet!
The unicorn is Scotland (vs England's lion), but I don't remember why...

Hi Karen what a wonderful trip you must have had and so many memories to go with it and seeing the Culloden Battlefield must have been very emotional and seeing the battlefield in person and seeing Castle Fraser also and images of Outlander must have been going through your mind , I hope to see Scotland its self someday . thanks for sharing with us fans . please post more soon. Happy Week. Sincerely .