8/11/2012 06:43:00 AM
Diana Gabaldon posted a description of WRITTEN IN MY OWN HEART'S BLOOD on her blog yesterday.  It's intended for use as "catalog copy" for the publishers, and it's only a few paragraphs long, but it's very interesting!

I don't consider it spoilerish -- it's the same level of detail that would be on the inside front flap of the hardcover -- but there were a couple of details that surprised me.

The impression I get from this description (keeping in mind that I've avoided almost all MOHB excerpts and #DailyLines so far, so I really don't have anything more than vague notions of what's actually in the book) is that this is going to be very much a character-focused, character-driven book, with plenty of action and lots of potential for conflict among those eight POV characters.  The war's still going on, of course, but it might not be at center stage as much as it was in ECHO.  (I could certainly be wrong about that.)

And if you're wondering about the reference to a "Moebius twist", here's an example of what a Moebius strip looks like. 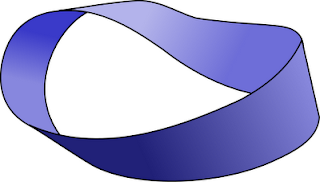 I'm guessing that reference has something to do with time-travel paradoxes?

"I told my editor I want an octopus on the cover of this book. (There are eight main characters whose stories are told--and they’re all linked together.)"

I love reading your blog!!

The best video I've ever seen depicting the concept of the Mobius Strip is by Vihart http://youtu.be/4mdEsouIXGM.