1) I had never heard the term "epergne" (an ornamental centerpiece for a table) until I read VOYAGER:


Unable to sit, he prowled restlessly around the parlor, the Bible in his hand, touching things. Jenny’s bookshelf, battered and scarred from the last incursion of Redcoats, three months ago. The big silver epergne. That was slightly dented, but had been too heavy to fit in a soldier’s knapsack, and so had escaped the pilfering of smaller objects. Not that the English had got so much; the few truly valuable items, along with the tiny store of gold they had left, were safely tucked away in the priest hole with Jared’s wine.

The silver epergne shown above dates from 1743.  You can see more details here, including close-up photos.  Here is an article that explains the history of the epergne.

My personal reaction: it's gorgeous, but you'd need a whole team of servants just to keep the thing polished! <g> 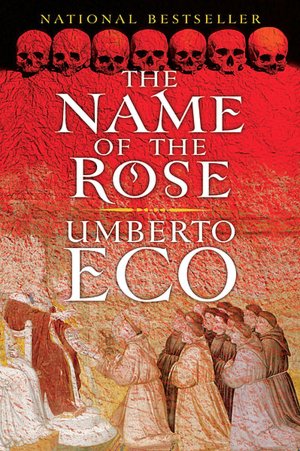 2) Did you know that Adso the cat got his name from a character in Umberto Eco's THE NAME OF THE ROSE?  The narrator of that novel is a monk called Adso of Melk.


"My mother was verra learned--she was educated at Leoch, ye ken, along with Colum and Dougal, and could read Greek and Latin, and a bit of the Hebrew as well as French and German. She didna have so much opportunity for reading at Lallybroch, of course, but my father would take pains to have books fetched for her, from Edinburgh and Paris."

He reached across my body to touch a silky, translucent ear, and the kitten twitched its whiskers, screwing up its face as though about to sneeze, but didn’t open its eyes. The purr continued unabated.

"One of the books she liked was written by an Austrian, from the city of Melk, and so she thought it a verra suitable name for the kit."

"Aye," he said, nodding toward the empty dish, without the slightest twitch of lip or eyelid. "Adso of Milk."

A slit of green showed as one eye opened, as though in response to the name. Then it closed again, and the purring resumed.

I've never read THE NAME OF THE ROSE, so I didn't recognize the reference until someone mentioned it on Compuserve a few years ago.  Here is what Diana had to say about it:


[T]hat name was one of my little hidden homages to another author--Adso of Melk is the narrator/hero of Umberto Eco's THE NAME OF THE ROSE. A fan who'd read both books--and happened to meet Eco at a conference somewhere mentioned it to him; luckily, she said he seemed amused. <g> 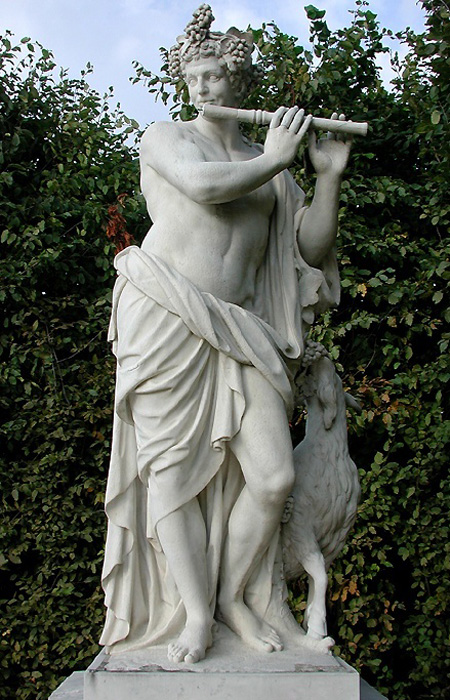 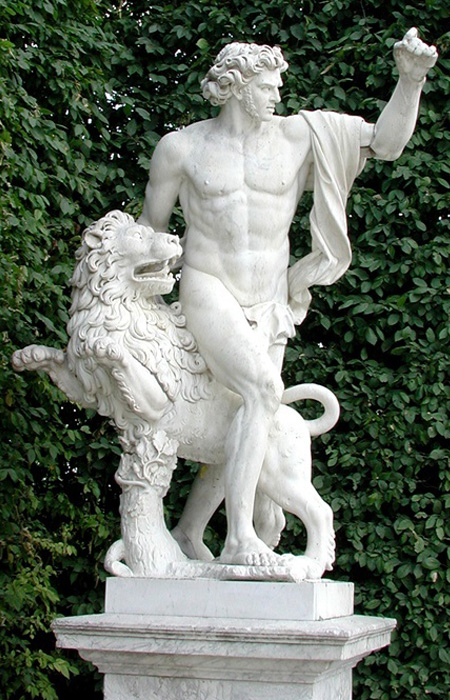 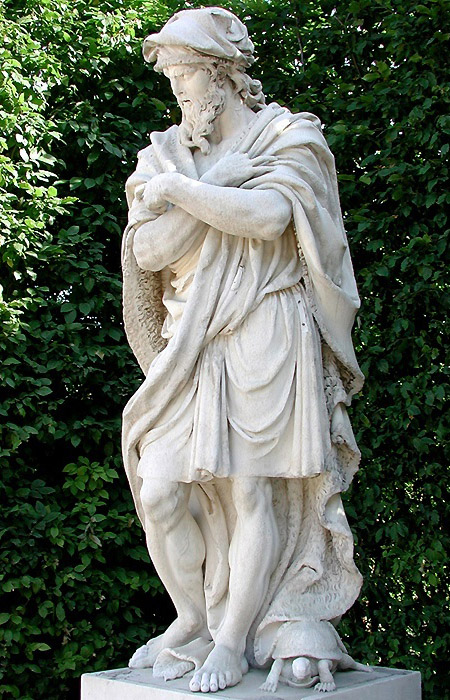 
I paused beside a statue of a half-draped man with grapes in his hair and a flute at his lips. A large, silky goat nibbled hungrily at more grapes that were cascading from the marble folds of the draperies.

Jamie shook his head, smiling. He was dressed in his old kilt and a worn, if comfortable coat, but he looked much better to me than did the luxuriously clad courtiers who passed us in chattering groups.

"No, I think there is a statue of Pan about, but it isna that one. That’s one of the Four Humors of Man.”

“Well, he looks fairly humorous,” I said, glancing up at the goat’s smiling friend.

“And you a physician, Sassenach! Not that sort of humor. Do ye not know the four humors that make up the human body? That one’s Blood”--he motioned at the flute-player, then pointed down the path--“and there’s Melancholy.” This was a tall man in a sort of toga, holding an open book.

Jamie pointed across the path. “And over there is Choler”--a nude and muscular young man, who certainly was scowling ferociously, without regard to the marble lion that was about to bite him smartly in the leg--“and that’s Phlegm.”

“Is it, by Jove?” Phlegm, a bearded gent with a folded hat, had both arms crossed on his chest, and a tortoise at his feet.


4) What is the "weather gauge" that Captain Hickman referred to in ECHO? Jamie obviously had no clue:


"I’m told that the Teal is firing at us,” he observed mildly. “Does this occasion ye no concern, sir?”

“Not yet it doesn’t.” Hickman spared a negligent glance at his stern windows, half of them covered with deadlights, presumably because of broken glass; a good many of the panes were shattered. “He’s just firing in hopes of a lucky shot. We’ve got the weather gauge on him, and will likely keep it for the next couple of hours.”

“I see,” said Jamie, with a convincing attitude of knowing what this meant.

“Captain Hickman is debating in his mind whether to engage the Teal in action, Uncle,” Ian put in tactfully, “or whether to run. Having the weather gauge is a matter of maneuverability, and thus gives him somewhat more latitude in the matter than the Teal has presently, I think."


The weather gage (sometimes spelled weather gauge) is a nautical term used to describe the advantageous position of a fighting sailing vessel, relative to another. The term is from the Age of Sail, and is now antiquated. A ship is said to possess the weather gage if it is in any position, at sea, upwind of the other vessel....An upwind vessel is able to maneuver at will toward any downwind point, since in doing so the relative wind moves aft....A ship with the weather gage, turning downwind to attack, may alter course at will in order to bring starboard and port guns to appropriate elevations.

The painting above, by Thomas Buttersworth (1768-1827), is called "Cutter and Brig off the English Coast". It may not be exactly the same as what the ships described in ECHO looked like, but to my untrained eyes, it's similar.

5) Why did apothecary shops always have a stuffed crocodile or alligator hanging from the ceiling? The custom goes back centuries, and is even mentioned in Shakespeare's Romeo and Juliet.  The photo above is from the Deutsches Apothekenmuseum in Heidelberg, Germany, which looks like a very interesting place to visit.  (Click on the photo to see a bigger view.)


A fairly good-sized crocodile, presumably stuffed, hung from the ceiling. I gazed up at the yellow belly-scutes, hard and shiny as pressed wax.

"Real, is it?" I asked, taking a seat at the scarred oak table.

"My crocodile? Oh, to be sure, madonna. Gives the customers confidence." He jerked his head toward the shelf that ran along the wall just above eye height. It was lined with white fired-porcelain jars, each ornamented with gilded curlicues, painted flowers and beasts, and a label, written in elaborate black script. Three of the jars closest to me were labeled in Latin, which I translated with some difficulty--crocodile's blood, and the liver and bile of the same beast, presumably the one swinging sinisterly overhead in the draft from the main shop.

What's the significance of the crocodile?  Check out this video for an explanation.

[UPDATE 8/12/2012 7:41 am:  I got an email last night from Alex Boxer, who created the "Inaugural Stuffed Crocodile" video, thanking me for including it here.  He says, "Because of you I received more views in one day than I have in the last 3 months combined!"  I told him that I thought it was fascinating, and so do a lot of other people, judging from the reaction so far.  If you want to see more of Alex's videos, check out his website at http://www.idolsofthecave.com.]

Karen
You have outdone yourself this week! These are wonderful. I love the variety but particularly the stuffed croc this week. One of the things I love is the details in the books. Your FFF reminds us of how rich these details truly are.
Catherine

Thanks so much! That is exactly why I do these FFF posts in the first place. I thought the stuffed crocodile facts were fascinating, myself. Glad you liked it! :-)

Karen,
I really love your FFF and look forward to reading them each week. Thank you for taking the time to share all of this interesting trivia with us. These books are such gold mines.
I am one of the ones that did read U. Eco's book when it came out in the early 1980's and I thought it was one of his best (didn't care for what they did to it for the movie, as usual) and when reading the Fiery Cross the first time got a good laugh from Diana's mention of a fictional character from another novel when was based on another fictional novel. Just so you know, Jamie and Ellen really wouldn't have been acquainted with th name of Adso of Melk, but maybe and older Briana will be in the future! I think it's very fun that Diana can pull our legs like this! Thanks, and you really should read the book. Plus his other ones. :)

I love the little inside jokes like this, that Diana includes in her books from time to time. I'm glad you've been enjoying the FFF!

When I finish a Gabaldon book I come away with a renewed love for my own husband and more knowledge of the 17oo's. What a great combination.

Karen, you are extending our learning! Thank you for searching out these obscure tidbits and sharing them with us!