1) A dovecote, or doocot as they were known in Scotland, is a structure built to house pigeons.  The photo above shows the doocot at Culloden.  (Photo credit: The Poss on Flickr.)

Why pigeons?  According to this site,


Pigeons provided a valuable source of year-round fresh meat and eggs, adding variety to meals in the winter months. Their droppings, which built up in the dovecots, made an excellent fertiliser and were used in the production of gunpowder and in the processes of leather tanning and cloth dyeing. There was also a prevalent belief that pigeons had medicinal properties and they were used in various forms as a cure-all for everything from the plague to baldness.

You may recall that Lallybroch had a doocot:


Besides the arbor, there was a small walled garden, blooming with the last of the summer roses. Beyond it was what Jamie referred to as "the doocot"; or so I assumed, from the assorted pigeons that were fluttering in and out of the pierced-work opening at the top of the building. Here's what a doocot looks like from the inside.  The pigeons would roost in the little cubbyholes.  (You can see that this is where the term "pigeonhole" comes from!)

Doocots came in many different shapes and sizes.  There's a list of Scottish doocots here if you're interested.

2) Dachshunds really were first bred in Germany specifically to hunt badgers.  The painting above is titled Dachs und Dachshund, by Carl Friedrich Deiker, 1875.  (Click on the picture for a bigger view.)

As some of you may know, Diana Gabaldon has two dachshunds, Homer and JJ (shown here on Diana's blog in 2009).  But Gustav in LORD JOHN AND THE BROTHERHOOD OF THE BLADE is named in honor of their predecessor, Gus the dachshund, who passed away in 2008, a few months after that book was published.


Gustav had tired of perching on his hind legs; he collapsed onto the floor and rolled onto his back, presenting a vast pink belly to be scratched, still wagging his tail. Grey obliged, raising a brow; the hound seemed so amiable as to appear almost feeble-minded.

“Badgers, you say. Has he ever killed one?”

“More than a dozen. I will show you the skins tomorrow.”

“Really?” Grey was impressed. He had met a few badgers, and knew of nothing—including human beings—willing to engage with one; the badger’s reputation for ferocity was extremely well founded.


3) This pair of engravings by Jean-Baptiste Le Prince, from 1765, demonstrate the use of the knout (rhymes with "out"), a whip used for floggings in Tsarist Russia.  According to Wikipedia,


The dreaded instrument became synonymous in Western European languages with what was seen as the tyrannical cruelty of the autocratic government of Russia, much as the sjambok brought to mind the Apartheid government of South Africa or the bullwhip was associated with the period of slavery and Jim Crow laws in America.

I don't think Lord John has ever seen a knout, but evidently Harry Quarry has:


He followed Harry down the rickety stair and out of the noisome yard to the street, where they both stood for a moment, breathing deeply.

“Russian flogging,” Quarry explained, tugging at his wilted stock. “With a whip made of hippopotamus hide. Saw it once; flayed the poor bugger to the bone in three strokes.”

“I see the appeal,” Grey agreed, feeling an unexpected kinship with his half-brother Edgar. “You haven’t got a spare knout you might lend me, before I go speak to Trevelyan?"

4) Remember the enormous lace-trimmed mobcap that Claire received from Grannie Bacon in THE FIERY CROSS?  Here are a couple of examples of what it might have looked like.  (Both of these paintings come from the collection of the Abby Aldrich Rockefeller Folk Art Museum at Colonial Williamsburg, which is a very interesting place to visit.) 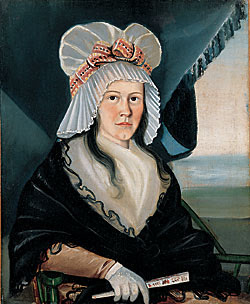 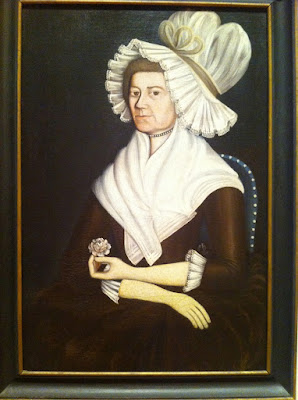 Looking at these paintings, I have no trouble understanding why Claire got upset.


"Grannie Bacon's sent ye a present," she explained proudly, as I unfolded the material, which proved to be an enormous mobcap, liberally embellished with lace and trimmed with lavender ribbons.  "She couldna come to the Gathering this year, but she said as we must bring ye this, and give ye her thanks for the medicine ye sent for her...roo-mah-tics."  She pronounced the word carefully, her face screwed up in concentration, then relaxed, beaming in pride at having gotten it out properly.

"Why, thank you.  How lovely!"  I held the cap up to admire, privately thinking a few choice things about Grannie Bacon.

You can see more examples of 18th-century mobcaps here. And here are some simple instructions for making one of your own.

5) This 18th-century engraving, from Wikipedia, shows a group of women in the Highlands waulking wool.  Click on the picture for a bigger view.

This video, showing a group of women wool-waulking while singing a Gaelic "waulking song", was filmed in South Uist, Scotland, in 1970.  I have no idea what they're saying, but you definitely can get a feel for how repetitive this work is!


“Hot piss sets the dye fast,” one of the women had explained to me as I blinked, eyes watering, on my first entrance to the shed. The other women had watched at first, to see if I would shrink back from the work, but wool-waulking was no great shock, after the things I had seen and done in France, both in the war of 1944 and the hospital of 1744. Time makes very little difference to the basic realities of life. And smell aside, the waulking shed was a warm, cozy place, where the women of Lallybroch visited and joked between bolts of cloth, and sang together in the working, hands moving rhythmically across a table, or bare feet sinking deep into the steaming fabric as we sat on the floor, thrusting against a partner thrusting back.

Great, as usual! you do choose very interesting topics to research. I think touring to see the various doocotes in the Highlands would make for a fun trip!

Thanks, Bev, I'm glad you liked it! I would like to see one of those doocots for myself some day. I think they're fascinating to look at.

Well done. I especially like the "waulking song" video. I enjoy researching the music of our Appalachian mountains as it relates to music brought here from Scotland, England and Ireland. I hear some familiar rhythms there.
It appears that a person getting out of step would send the rest toppling.