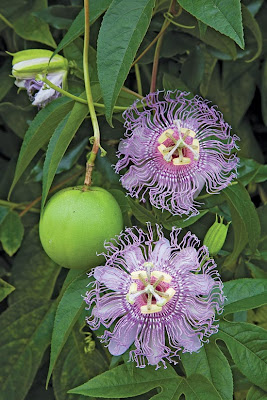 1) The photo above shows a maypop fruit (Passiflora incarnata), mentioned in DRUMS OF AUTUMN in the scene near the end of the book where Roger returns to the Ridge.


Nayawenne had told me that the scent of carnivore urine would keep rabbits away—and a man who ate meat was nearly as good as a mountain lion, to say nothing of being more biddable. Yes, that would do; he’d shot a deer only two days ago; it was still hanging. I should brew a fresh bucket of spruce beer to go with the roast venison, though…

As I wandered toward the herb shed to see if I had any maypop fruits for flavoring, my eye caught a movement at the far edge of the clearing. Thinking it was Jamie, I turned to go and inform him of his new duty, only to be stopped dead in my tracks when I saw who it was.

The gorgeous purple flowers are known as passionflower.  According to Wikipedia,


Traditionally, the fresh or dried whole plant has been used as a herbal medicine to treat nervous anxiety and insomnia. A small clinical study suggested that in the form of a tea it may improve the subjective quality of sleep. The dried, ground herb is frequently used in Europe by drinking a teaspoon of it in tea. A sedative chewing gum has even been produced.

For more information about maypops, look here and here.

2) The illustration above, from an 1845 engraving, shows villagers bringing in a Yule log, just as we saw in THE SCOTTISH PRISONER.  (Click on the picture for a bigger view.)

Willie rode atop the log, screeching with excitement, clinging to the rope. Once back at the house, Isobel had tried to teach him to sing “Good King Wenceslas,” but it was beyond him, and he dashed to and fro, into everything, until his grandmother declared that he would drive her to distraction and told Peggy to take him to the stable to help Jamie and Crusoe bring in the fresh-cut branches of pine and fir.

Where did this tradition come from?  According to Wikipedia:


The first mention of the Yule log in Britain is a written account by the clergyman Robert Herrick, from the 1620s or 1630s. Herrick called the tradition a "Christmas log" and said that it was brought into the farmhouse by a group of males, who were then rewarded with free beer from the farmer's wife. Herrick claimed that the fire used to burn the log was always started with a remnant from the log that had been burned in the previous year's festivities. He also said that the log's role was primarily one of bringing prosperity and protection from evil - by keeping the remnant of the log all the year long the protection was said to remain across the year.

Here's a modern Yule log tradition you may be familiar with. (I remember this very well, growing up in New Jersey in the 1970s.  We used to watch it every year.)  And there's also an edible Yule log, known as a Buche de Noel. <g>

3) Here is a video of Johnny Cash performing "Folsom Prison Blues".  You can see the lyrics here.

4) The photos above show a couple of examples of an 18th-century architectural form known as a folly.  The top one is a folly in Stowe, England, called the Temple of Ancient Virtue, built in 1734.  The bottom one is the Temple of Pan, in Osterley, England, built in 1720. (Photo credit for both: curry15 on Flickr.  Click on the pictures to enlarge them.)

For more about follies, look here.  You can see many more photos of England's follies here. And here is another page with wonderful photos of follies. (Thanks, Sandy!) 5) Finally, here's a fun fact for the holidays: Jemmy's first Christmas gift from his Grandda was a toy wooden horse, that might have looked something like the one shown above.


I glanced down in search of Jemmy; he had learned to crawl only a few days before, but was already capable of an astonishing rate of speed, particularly when no one was looking. He was sitting peaceably enough in the corner, though, gnawing intently at the wooden horse Jamie had carved for him as a Christmas present.

Happy holidays to all of you!

Thank you for all the Friday Fun Facts, and Happy Holidays to you!