Jamie was standing with the Captain on the afterdeck, watching the approach of a large ship behind us. She was perhaps three times the size of the Artemis, three-masted, with a perfect forest of rigging and sail, through which small black figures hopped like fleas on a bedsheet. A puff of white smoke floated in her wake, token of a cannon recently fired.

“Is she firing on us?” I asked in amazement.

“No,” Jamie said grimly. “A warning shot only. She means to board us."

"Can they?” I addressed the question to Captain Raines, who was looking even more glum than usual, the downturned corners of his mouth sunk in his beard.

“They can,” he said. “We’ll not outrun her in a stiff breeze like this, on the open sea.”

“What is she?” Her ensign flew at the masthead, but seen against the sun at this distance, it looked completely black.

The photo above shows a model of a British man o' war called HMS Bellona.  (Click on the photo to enlarge it, and look here for more close-up views.)  Launched in 1760, the Bellona was the prototype for a class of 74-gun warships that were widely used by the British Navy in the latter part of the 18th century.  It may not be exactly the same as the Porpoise, but it's probably not too different.

The diagram above shows all of the different parts of a man o' war. Click on the picture for a bigger view. 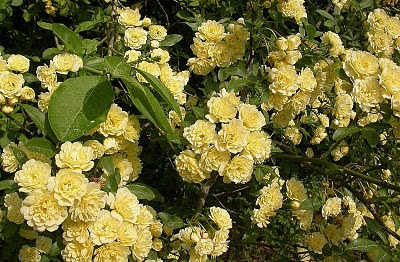 2) One of the things that fascinates me about Diana Gabaldon's books is the way that tiny and seemingly unimportant details can form a link from one part of the series to another.  Claire's reaction to the smell of roses, for instance.

Here's a bit from DRAGONFLY, just after Claire and Jamie return to Lallybroch:


His mother, Ellen, had planted the late-blooming rosebush by the door. Its faint, rich scent still wafted up the walls of the house to the bedroom window. It was as though she reached in herself, to touch him lightly in passing. To touch me, too, in welcome.

Contrast that with the scene from the party held in Flora MacDonald's honor in ABOSAA, nearly thirty years later.  I like to imagine that the roses Claire saw at River Run looked like the ones in the photo above.  But the effect they have on Claire this time is quite different, as she experiences a flashback to her encounter with King Louis:


The air around me was suffused with the scent of roses, and I heard the creak of the dress cage as Louis’s weight pressed upon it, and heard his sigh of pleasure. The room was dark, lit by one candle; it flickered at the edge of vision, then was blotted out by the man between my--

“Christ, Claire! Are ye all right?” I hadn’t actually fallen down, thank God. I had reeled back against the wall of Hector Cameron’s mausoleum, and Jamie, seeing me go, had leapt forward to catch hold of me.

He heard the note of terror in my voice, and slackened his grip, but couldn’t bring himself to let go altogether, lest I fall. With the energy of sheer panic, I pulled myself upright, out of his grasp.

I still smelled roses. Not the cloying scent of rose oil--fresh roses. Then I came to myself, and realized that I was standing next to a huge yellow brier rose, trained to climb over the white marble of the mausoleum.

I think it's fascinating to compare Claire's reaction in the two scenes. 3) The photo above shows a 10-shilling note, an example of "proclamation money" printed in Colonial North Carolina.

What exactly was meant by the term "proclamation money"?  According to this site:


To get around the shortage of money, colonial governments printed paper money, and colonists used whatever foreign currency they could get their hands on -- Spanish dollars, for example. Today, global trading in currency sets exchange rates, but there were no international banks to set exchange rates in the 1700s. Instead, each colony set an official value in pounds, shillings, and pence on paper money and foreign coin. Because their value was set by proclamation, these currencies were called proclamation money.

If you click on the picture above to enlarge it, you'll notice the signature "R. Caswell" at the bottom right. I wonder if this is the same Richard Caswell who appears briefly in FIERY CROSS and ABOSAA?

Here's another example of proclamation money used in North Carolina. This one is worth five pounds. Note the warning, "Death to Counterfeit", prominently displayed along the bottom and sides.


"You write a very fair hand, Mrs. Fraser,” he unbent enough to say, at one point, and gave me a brief, wintry smile. “It is unfortunate that you should have been the forger, rather than the murderess.”

"Why?” I asked, rather astonished at that.

“Why, you are plainly literate,” he said, surprised in turn at my astonishment. “If convicted of murder, you could plead benefit of clergy, and be let off with a public whipping and branding in the face. Forgery, though--” He shook his head, pursing his lips. “Capital crime, no pardon possible. If convicted of forgery, Mrs. Fraser, I am afraid you must be hanged.”

My feelings of gratitude toward Sadie Ferguson underwent an abrupt reappraisal.

So why was forgery punishable by death in Colonial America? It seems a very severe punishment by modern standards.  Here's one explanation, from Wikipedia:


The theory behind such harsh punishments was that one who had the skills to counterfeit currency was considered a threat to the safety of the State, and had to be eliminated. Another explanation is the fact that issuing money that people could trust was both an economic imperative, as well as a (where applicable) Royal prerogative; therefore counterfeiting was a crime against the state or ruler itself, rather than against the person who received the fake money.

For more about money in Colonial North Carolina, look here. 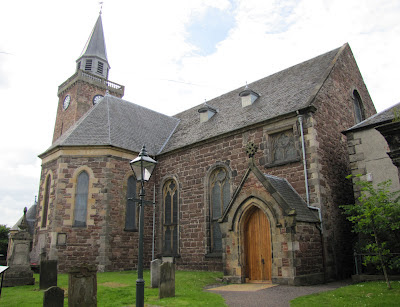 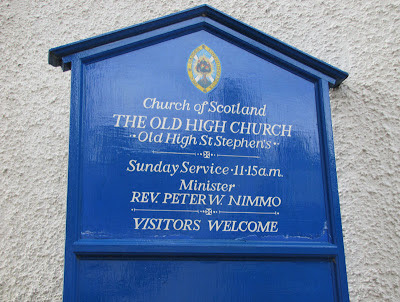 4) This is the Old High St. Stephen's Church in Inverness, Scotland.  When I visited Inverness in July on the Celtic Journeys OUTLANDER Tour, I made a point of going to find this church (although I didn't actually go inside), specifically because it was mentioned in ECHO:


"After a bit, I found my way to Inverness and was sittin’ on the curb of the street, quite dazed by the huge great roaring things goin’ by me--I’d seen the cars on the road north, of course, but it’s different when they’re whizzin’ past your shins. Anyway, I’d sat down outside the High Street Church, for I knew that place, at least, and thought I’d go and ask the minister for a bite of bread when I’d got myself a bit more in hand. I was that wee bit rattled, ken,” he said, leaning confidentially toward Brianna.

“I suppose so,” she murmured, and lifted an eyebrow at Roger. “Old High St. Stephen’s?”

If you visit Inverness, I would certainly recommend taking a look at this church.  It happens to be located right next door to a fabulous second-hand bookshop called Leakey's, which is worth browsing in if you have the time.  You can see more about my trip to Scotland here.

5) And finally, here's a Scottish custom for Hogmanay, the New Year's celebration.


A firstfoot was to bring gifts to the house: an egg, a faggot of wood, a bit of salt--and a bit of whisky, thus insuring that the household would not lack for the necessities during the coming year.

I can't participate in a first-footing myself, even if I lived in Scotland (redheads being considered extremely bad luck on such an occasion), but I'd like to share these small tokens with you anyway.  For more about Hogmanay traditions in Scotland, look here.

Richard Caswell was an historical character. See:
http://en.wikipedia.org/wiki/Richard_Caswell. As governor of North Carolina I would assume his signature might appear on proclamation money.

Happy New Year to you too Karen.

We used to practice first footing in Northern England too! The rules were that a dark haired man had to bring a piece of coal but he couldn't have already been in the house that same evening or it was bad luck. I remember a dark haired neighbour going around each house but at a push my Dad used to make himself scarce beforehand than turn up at my Grandparents house (where we got together at New Year) with a lump of coal he's nicked from the coal house.