1) The photo above, from Wikipedia, shows a bactrian camel (Camelus bactrianus).  What do camels have to do with OUTLANDER?


"She must go back, Sassenach—ye know it as well as I do.” He stirred impatiently but didn’t move away. “Look at her. She’s like Louis’s camel, no?”

Despite my own regrets, I smiled at the thought. Louis of France kept a fine menagerie at Versailles, and on good days the keepers would exercise certain of the animals, leading them through the spreading gardens, to the edification of startled passersby.

We had been walking in the gardens one day, and turned a corner to find the Bactrian camel advancing toward us down the path, splendid and stately in its gold and silver harness, towering in calm disdain above a crowd of gawking spectators—strikingly exotic, and utterly out of place among the formalized white statues.

Here is a short video about bactrian camels.  They look pretty exotic even by our standards today.  Imagine what those 18th-century French aristocrats must have thought of them!

2) The calendar change mentioned in the Author's Notes at the end of "A Leaf on the Wind of All Hallows" is a real historical event.


Before y’all get tangled up in your underwear about it being All Hallows’ Eve when Jeremiah leaves, and ‘nearly Samhain’ (aka All Hallows’ Eve) when he returns--bear in mind that Great Britain changed from the Julian to the Gregorian calendar in 1752, this resulting in a 'loss' of twelve days.


To align the calendar in use in England to that in use on the continent, the changes introduced in 1582 by the Gregorian calendar were adopted with effect in 1752. To this end, the calendar was advanced by 11 days: Wednesday 2 September 1752 was followed by Thursday 14 September 1752.

As Diana commented on Compuserve in 2010, just after "Leaf" was first published,

There may or may not have been riots in England in protest of the calendar change, as depicted in this William Hogarth painting from 1755.  (Click on the photo to enlarge it and look closely at the bottom right, just to the right of the man sitting on the floor; you can just make out a poster with the words "GIVE US OUR ELEVEN DAYS" on it.)  According to Wikipedia, there's no evidence, other than this painting, that such public protests actually occurred.

Along with everyone else in Scotland at the time, Jamie Fraser would have been affected by the calendar change, but as he was still living in the cave in September 1752, I doubt he took any notice of it. <g> 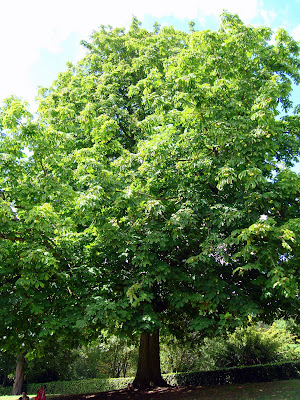 3) The photo above shows what a horse chestnut tree looks like.  Now picture Roger and Bree in DRUMS, reunited at last after many months apart.


"What are you doing here?” she asked.

He detached her fingers and gripped them firmly.

“Not here,” he snapped. He took her arm and dragged her a little way down the road, to the shelter of a big horse-chestnut tree. The sky still glowed with the remnants of twilight, but the drooping branches reached nearly to the ground, and it was dark enough underneath to hide them from any curious souls who thought of venturing after them. A few minutes later, Bree picks up a prickly conker from the ground, like the ones shown in this photo, and slips it into her pocket.  I like to think she kept it during those long months of waiting, as a reminder of Roger.

Many horse-chestnut trees in the UK today are suffering from a disease known as "bleeding canker". Here's an article with more details. 4) Claire was surprised to learn in DRAGONFLY IN AMBER that urinoscopy was still practiced at L'Hopital des Anges: 5) You may remember Ronnie Sinclair and Rosamund Lindsay arguing about barbecue at the Gathering in THE FIERY CROSS.


“Aye, well, but this is the barbecue, isn’t it?” Ronnie said stubbornly, ignoring my feeble attempt at humor. “Anyone kens that ye sass a barbecued hog wi’ vinegar--that’s the proper way of it! After all, ye wouldna put gravel into your sausage meat, would ye? Or boil your bacon wi’ sweepings from the henhouse? Tcha!” He jerked his chin toward the white pottery basin under Rosamund’s arm, making it clear that its contents fell into the same class of inedible adulterants, in his opinion.

I caught a savory whiff as the wind changed. So far as I could tell from smell alone, Rosamund’s sauce seemed to include tomatoes, onions, red pepper, and enough sugar to leave a thick blackish crust on the meat and a tantalizing caramel aroma in the air.

As a longtime resident of North Carolina, this scene always makes me laugh, because some things haven't changed in 240 years! From Wikipedia:

Another wonderful edition! The barbeque scene in Fiery Cross always makes me laugh too. My father and his friends used to go on Barbeque Expeditions, and challenged themselves to sample barbeque across the entire state of NC. They had a great deal of fun doing it, and ate a tremendous amount of BBQ Their preference(and mine)is Eastern, but I never heard reports of them turning down any Western. I think their call to arms was, "Bring it! Bring it all!"

I was thinking at that time tomatoes were not thought of as edible. did n't Claire use Jamie eating them to demonstrate how good they were? so I am surprized that they were using tomatoes in the sauce.
gstanley

I always figured it had something to do with Rosamund being a) not Scots and b) from Boston. She's from a city or around a city, so there are more influences. A lot of the Scots around Fraser's Ridge are not cosmopolitan at all and hold to older ways of doing things?

Thankyou so much Karen for your good work and research!I was delighted by today'sFFF.Re-reading the books (currently on DOA)I can easily pick up small details and refer to your explanations,so re-reading is much,much better.Finished A Trail of Fire a few days ago, I'll be in for a re-read soon.I'll come for more next week for sure. Best greetings.

Wow!! You sure have good eyes! Even expanded to full screen I could barely see the writing on the poster - give us back our eleven days. Love your posts.

I always look forward to Friday's Fun Facts. Thanks for all of your hard work for all of us Outlander fans. I honestly don't know how you manage to do it!

Julia - I remember when I first moved to NC in the '80s, being very surprised by how seriously people here take their BBQ. In reference to the scene in FIERY CROSS, I once told someone on Compuserve, "Hey, they had to have something to argue about before basketball was invented!" :-)

Glad you liked it!

Anon - you're right about the tomatoes. I think that's one reason Ronnie Sinclair was soo horrified. One of my earliest FFF posts talks about this. Look here.

Christiane - I'm really glad to hear you say that! You can probably tell that I'm listening to DRUMS this month, too. :-) Hope you enjoy A TRAIL OF FIRE!

Patricia - LOL! Actually, I'm very nearsighted. :-) I agree that the letters are very hard to see, but if you already know what it says, you can sort of make it out. Presumably the real painting is large enough for the words to be easily readable, though. :-)

Phyllis - thanks so much! I'm really glad you're enjoying the FFF!

Being a North Carolina native (but not a fan of barbecue, I'm afraid), I too thought of NC barbecue when I read that part in The Fiery Cross. :-)