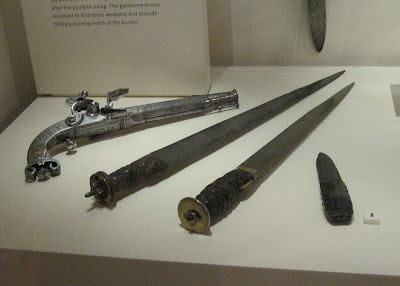 1) Today is Robert Burns Day, and by way of celebration, I thought I'd take a closer look at something distinctively Scottish:  the traditional Highland dirk.  Here is an article describing the traditional Scottish dirk.  (Thanks to Jari Backman, who found this link for me a few years ago.)

Here's Rupert, teaching Claire the art of wielding a dirk:


“Now, here,” he said, pointing to the center, just under the breastbone, “is the spot to aim for, if ye’re killin’ face to face. Aim straight up and in, as hard as ye can. That’ll go into the heart, and it kills wi’in a minute or two. The only problem is to avoid the breastbone; it goes down lower than ye think, and if ye get yer knife stuck in that soft bit on the tip, it will hardly harm yer victim at all, but ye’ll be wi’out a knife, and he’ll ha’ you."

I took the photo above, showing 18th-century dirks, pistol, and sgian dubh, at the National Museum of Scotland in Edinburgh in July, 2012.  (Fascinating place, and definitely worth a visit if you're in Edinburgh!)  Click on the photo for a better view.

This is a dirk that belonged to Lord Balmerino, who was executed in 1746 for his part in the Jacobite Rising.  (Photo credit: East Ayrshire Museums and Galleries)  You may remember Balmerino, who appeared briefly in DRAGONFLY IN AMBER.  This particular dirk eventually came into the possession of Robert Burns, so I thought it was appropriate to post today. <g>

2) This is a great blue heron, like the one William saw in ECHO.  (Click on the photo to enlarge it.)


A sudden movement sent him lunging sideways, hand reaching for his pistol. He barely remembered that the pistol was gone, before realizing that his adversary was a great blue heron, which eyed him with a yellow glare before launching itself skyward in a clatter of affront. A cry of alarm came from the bushes, no more than ten feet away, together with the boom of a musket, and the heron exploded in a shower of feathers, directly over his head. He felt drops of the bird’s blood, much warmer than the cold sweat on his face, and sat down very suddenly, black spots dizzy before his eyes.

For more about the great blue heron, look here.

3) This is what cinchona bark looks like.  Cinchona has been used for centuries as a treatment for malaria.  According to Wikipedia,


According to legend, the first European ever to be cured from malaria fever was the countess of Chinchón, the wife of the Spanish Luis Jerónimo de Cabrera, 4th Count of Chinchón - the Viceroy of Peru. The namesake Chinchón is a small town in central Spain. In the Viceroyalty of Peru, the court physician was summoned and urged to save the countess from the waves of fever and chill threatening her life, but every effort failed to relieve her. At last, the physician administered some medicine he had obtained from the local Indians, who had been using it for similar syndromes. The countess survived the malarial attack and reportedly brought the cinchona bark back with her when she returned to Europe in the 1640s.

Cinchona bark -- sometimes called Jesuit bark -- contains quinine, which remained the antimalarial drug of choice until the 1940s, when other drugs with less unpleasant side effects replaced it.


[Lizzie] was still shockingly thin, but the nasty yellow tinge of jaundice was fading from her skin, and her eyes were nearly white again. I cupped my fingers gently under her jaw; lymph glands only slightly swollen--that was better, too.

“Feeling all right?” I asked. She smiled shyly, and nodded. It was the first time she had been outside the cabin since her arrival with Ian three weeks before; she was still wobbly as a new calf. Frequent infusions of Jesuit bark had helped, though; she had had no fresh attacks of fever in the last week, and I had hopes of clearing up the liver involvement in short order.

4) I had never heard of oast houses until I read THE SCOTTISH PRISONER. The photo above shows the oast houses at Sissinghurst, Kent, England.  (Click on the photo to enlarge it.)


Athlone Castle was black and squat. It reminded Grey vaguely of an oasthouse, those cone-shaped structures in Kent where hops were dried. Much bigger, though.

Here's an article about oast houses in England. According to this site,


The distinctive conical roof of the oast is necessary to create a good draught for the fire. The odd projections at the peak of the roof are cowls which can be pivoted to create just the right airflow for the kiln fire to draw properly.

Have any of you ever seen one of these? 5) Finally, in honor of Robert Burns Day, here's the quote that led Roger to pinpoint Jamie's exact location in the past.  It comes from the final stanza of a poem called "The Author's Earnest Cry and Prayer", which Robert Burns wrote in 1786.

Always fun and always informative! Lord Balmerino's dirk looks positively lethal! I can't imagine carrying one like Claire did and then using it, amazing.

It is definitely time for me to go back to the National Museum to see all the exhibits with 'new' eyes.

Glad you enjoyed it! :-) Dirks are much bigger in reality than I had imagined. I loved the museum and would certainly recommend it! All their 18th and 19th century artifacts are fascinating.

Thanks for the tidbit about the bark. Historical medicine fascinates me. I always wonder who the person was that came up with the idea to peel the bark off a tree and treat it for that particular sickness.

I really like to collect medieval swords like Scottish Dirk and other military swords for my sword collection.